Panjab Uni. May Be One Of India’s Best, But Its Hostel Rules Are Terribly Sexist

By Vaibhav Jain in Campus Watch, Sexism And Patriarchy

Panjab University, which was the best university in the country, according to the Times Higher Education World Rankings 2014-15 has eight hostels for boys and nine for girls. The tenth hostel for girls is also under construction and is expected to be opened this year. However, there exist a different set of rules for the boys’ hostels and another set of rules for the girls.

What are these differences? 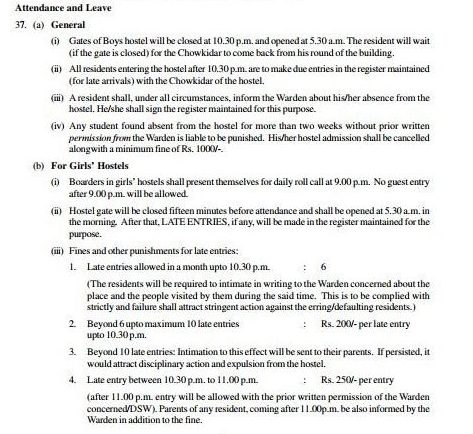 However, these are just the rules on paper. Boys in the university don’t get into trouble for roaming outside 24X7 and their hostel gates are actually never closed. The girls aren’t able to afford that privilege since their hostel rules are strictly followed.

Vani Sood, who has been elected to the post of General Secretary of the Panjab University Campus Student Council (PUCSC), tells us, “Apart from being the General Secretary of PUCSC, I am also a resident of one of the girls’ hostels of PU for the past two years. I’m also bounded by the same restrictions and facing the same problems that any other girl hostel resident faces. It has to go.”

Despite many girl students being unhappy with the restrictions, it has hardly been discussed in the public domain. The issue was raised by some of the political parties in this year’s campus elections, but it hardly became a pressing issue on which the elections could’ve been won.

If even a girl student representative feels a discomfort due to such rigid rules, one naturally expects other girls to feel suffocated under such restrictions.

Shreya, a girl from Hostel 2 – Laxmi Bai Hall tells us, “I can’t study at the library at night even during the exams due to the time restrictions and the hefty fines imposed. It affects my studies as well.” Her friend Varnika adds, “This is not even just about visiting the library and studying late night. Why am I not free to go anywhere at night? I’m a young adult and should be deemed responsible for my actions. What makes the authorities take responsibility for my safety, and pose restrictions on me in the process?”

Vani believes that if safety is the concern, the girl students shouldn’t have to forego their freedom for it. The hostel, she adds, “In my opinion, most of the safety issues are due to outsiders, so the outsider entries should be restricted at least during the night hours. The hostel restrictions should be completely removed and proper measures must be taken for the safety of all the students of Panjab University. It will be shameful for us if we can’t even provide girls safety on their own campus.”

There also hasn’t been any major protest against such hostel rules. The reason, as another hostel resident Simran puts it, is the lack of popular support to such ‘women-centric’ issues. She adds that women have been scarcely represented in the student council in all these years, which is another reason that the issue has not been given centre stage.

The women residents continue to live with it, as the male residents seem to be just indifferent to the situation. Many of them, as we talked to them, even supported the restrictions citing safety. “The restrictions that are there on girls are in their best interests, given the prevailing conditions in the society. Who will be responsible if tomorrow there’s a sexual crime on campus? Won’t it degrade the prestige of the university?” Shubham from Boys’ Hostel No. 5 tells us, as many find themselves aligning with the same view.

YKA tried to get in touch with the Vice-Chancellor and the Dean of Student Welfare of Panjab University, but they were unavailable for comment.

“For how long now will we continue to hear the rant – All of this is for the girls’ own safety and that the rules are for the girls’ benefit? The fact is that these restrictions are harming us more than anything else. We can’t study at the library through nights, nor can we visit our friends. Moreover, it reiterates the prevalent patriarchal mindset of the society,” says Neha, a second-year student and resident of Girls’ Hostel No. 8.

The girl students are evidently not comfortable with the restrictions. The questions stay. Why isn’t the campus safe enough for the girls to roam free at any hour? If it is, then why the ban?