An Unfortunate Reminder That Dark Is Still Not Lovely In India

By Breakthrough India in Body Image, Sexism And Patriarchy, Society

Over 90% of women in India cite skin lightening as a high need area.

Recently, Dove made headlines when it aired a deeply problematic (and racist) ad. It created enough of an uproar for Dove to come forward and issue an apology – but it’s not the first time Dove has come under fire. Many people were deeply upset. Some were furious.

Meanwhile, around the same time, there were speculations that the cosmetic giant Anastasia Beverly-Hills may have lightened the skin tone of one of its black models in promoting their latest product to such an extent that the same lip colour looked like a wildly different shade on the lighter-skinned models. In an increasingly globalised world, fair skin has become one of the beauty ideals we are made to aspire to.

In 1978, Fair and Lovely was launched by Unilever in India. The market for fairness creams, bleaches and washes is huge and continues to grow exponentially each year. Indians spend more on skin lightening products than on Coca-Cola.

“Let’s face the truth. Fair skin is a ticket to a happy matrimony,” Lata, 42, said while paying for the Fair and Lovely fairness cream, according to this marketing book.

You’re ‘lovely’ if you’re fair and if you’re not — “become fairer in just four weeks!” 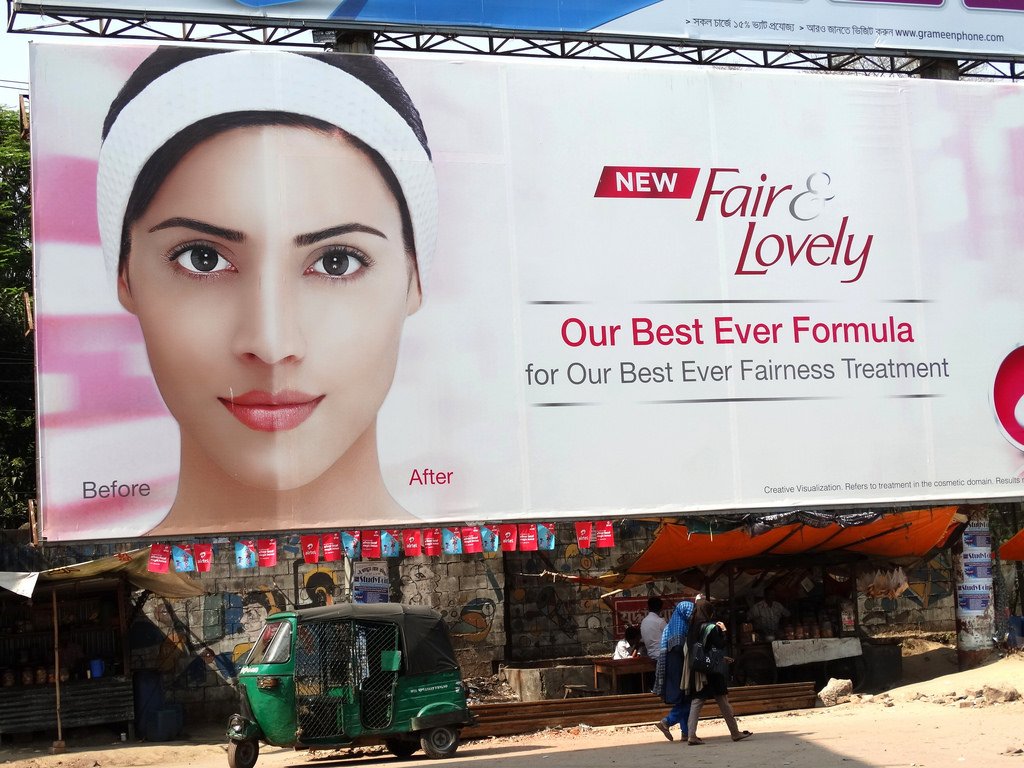 There are very unfortunate and real reminders that dark skin is still seen as a liability in India. Dark skin is undesirable. It is unattractive. And it’s not just for women.

In 2005, Emami launched Fair and Handsome, the very manly fairness cream – for men! Why would you use a woman’s fairness cream if you’re not putting on nail polish (Ew!) or wearing bangles (Double ew!)? In a brilliant stroke of advertising which combined racism and sexism to sell their new fairness cream, Emami entered the lucrative skin-lightening market. In 2014, Indians spent $550 million on fairness products.

In a country where racism is bred into us and fair skin fetishised, we are bombarded with aggressive advertising which equate fair skin with not just beauty, but success and happiness as well. This advertising is shameful and irresponsible advertising in a nation where the majority of our population is brown and dark skinned.

Apart from causing insidious self-esteem issues in so many, it is also extremely unsafe. Fairness creams often contain topical steroids and the toxic metal mercury, in addition to other dangerous chemicals. Women are especially vulnerable to such toxins during sensitive periods, such as pregnancy.

With this as a background, we can see why so many campaigns have focused on removing the stigma around dark skin. There were “Dark is Beautiful” – an Indian paper wrote about the campaign but lightened a photo of Nandita Das that went alongside it – and “Unfair and Lovely” – another campaign which wanted to celebrate dark-skinned women, amongst other initiatives like ‘Brown n Proud‘.

“I want people to be comfortable in their own skin and realise that there is more to life than skin colour,” said Nandita Das.

In one of the most recent campaigns against this deep-rooted bias, people are using the hashtag ‘AlreadyLovely’, a spin on the well-established Fair and Lovely, to express their dissatisfaction and point out the unfairness of a standard which holds fair skin as the ideal. Women and men have both come forward with their stories and their support for a fairer beauty standard. Embrace your melanin. It doesn’t matter what shade your skin is. People are speaking out and it’s fierce as hell.

Not too long ago, the actress Tannishtha Chatterjee was subjected to regressive humour based on skin colour on national television. It wasn’t the only time this happened – dark skin is the butt of countless jokes, on and off Indian TV. These jokes are far too common to keep a track of.

A roast is an insult-based comedy and it seems like we’re perfectly fine with using dark skin as an acceptable insult. One may argue that it isn’t anything serious but when a long history of putting down individuals because they are dark skinned already exists, it’s not funny – it’s tragic.