This Dinosaur Really Wants To Save Adivasi Languages

By Ankush Vengurlekar in Education, Society

What if I were to tell you that your mother tongue will no longer be taught in schools and you’ll be forced to study in a medium that is unknown to you? Or that your literature, your traditional knowledge, and practices are now seen as irrelevant? Or maybe that your ancestral medicines, your folk songs, and your art are symbolic of your ‘primitive’ culture which you must let go of to be ‘developed’? How would that make you feel?

A 100 million Adivasis and their indigenous languages are facing the fate of possible extinction in India. Although there are many articles talking about this, not enough is being done to save the languages. I decided to spread awareness about this in a slightly unconventional way. I thought, “Who better to talk about extinction than the most iconic dinosaurs?”  So we invited one to Bango and Dungridih villages of Jadugoda. To find out what happened when the dinosaur met the Adivasis, you’ll have to read the rest. 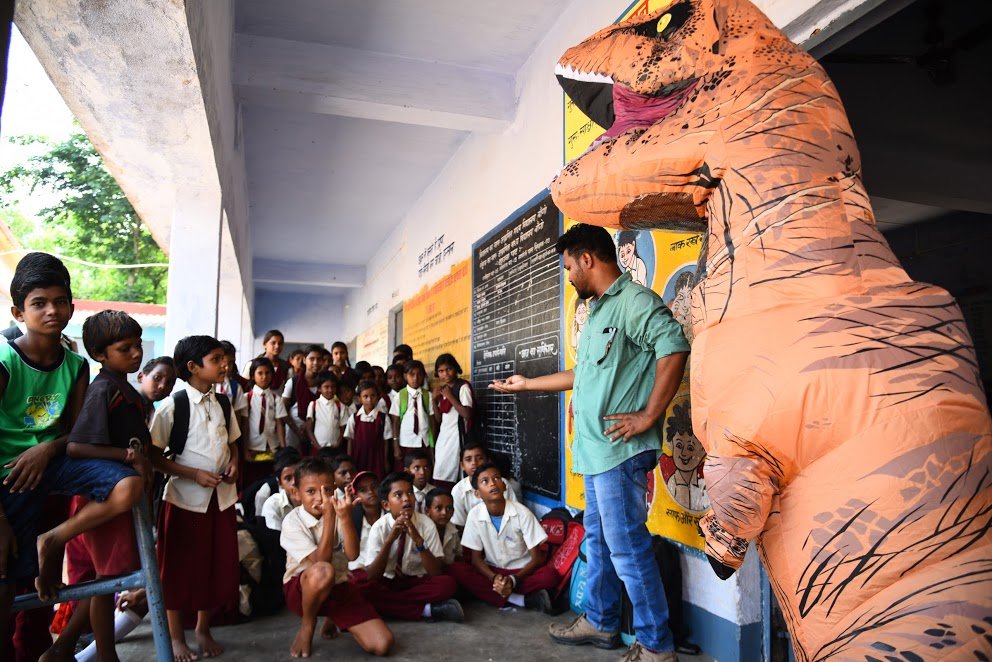 The dinosaurs, as all of us know, have been extinct for millions of years. Thanks to movies, literature and discoveries, the most identifiable extinct species ‘live on’ well into the 21st century. And no, Jharkhand is not turning into a Jurassic Park, where dinosaurs were being created from fossilized DNA. Our ‘Dinosaur’ – a person wearing a bodysuit – is here to talk to the Adivasi children in Jharkhand about the extinction of their culture in a way that would interest them. 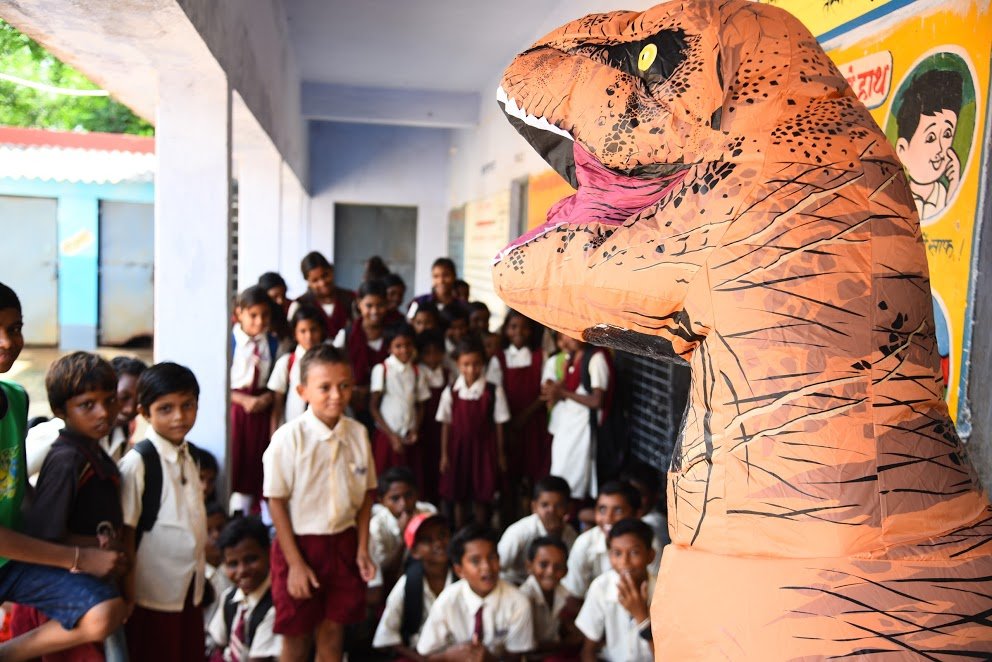 Where Did The Dinosaur Visit?

The children in the government schools in Bango village and Dungridih village, were overjoyed to see the dinosaur in their school and village. Similar to when a celebrity comes visiting, they literally lined up to shake hands with the dinosaur and some even posed to take exclusive photos with the dino. The villages in question here are close to Jamshedpur and are near the nuclear tailing ponds of the Uranium Corporation of India Limited (UCIL), which mines uranium in the area. The Adivasis here have already given up their land or have had it taken from them in order to accommodate the nuclear waste. They know first-hand what it means to lose their habitat – and they also risk losing their identities, which would happen if they were to be displaced permanently. 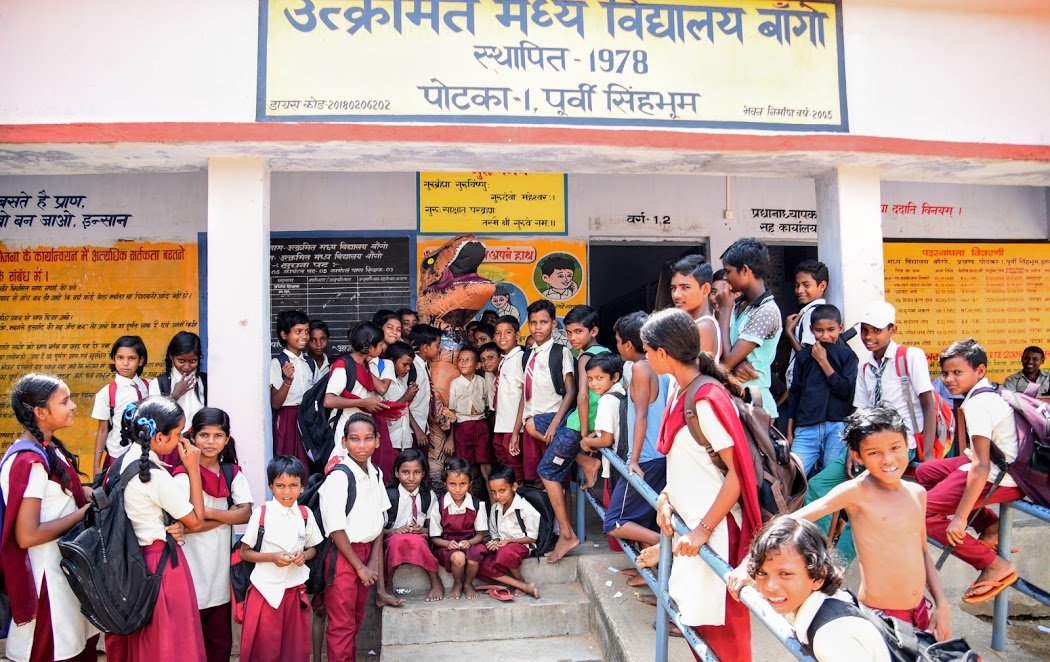 How Many Languages Are Endangered Today And Why?

According to this article, there were 1652 languages in India when the 1961 population census was conducted by the Government of India. Today, one cannot determine the actual number of living languages, since those spoken by less than 10,000 people are categorized as ‘Others’. According to Professor Ganesh Devy, over the next 50 years, we are likely to lose more than 400 languages. Most of the languages at risk are those spoken by marginalised communities like the Adivasis, who constitute 8.5% of India’s population.

In 1926, when India was being organised according to linguistic characteristics, the languages with a script were counted – and those without one did not get their own states. Schools and colleges in India imparted education only in the 22 official languages recognised in the constitution. Languages without a script had no place in the education system. This resulted in Adivasis lagging behind in education and their languages losing recognition. 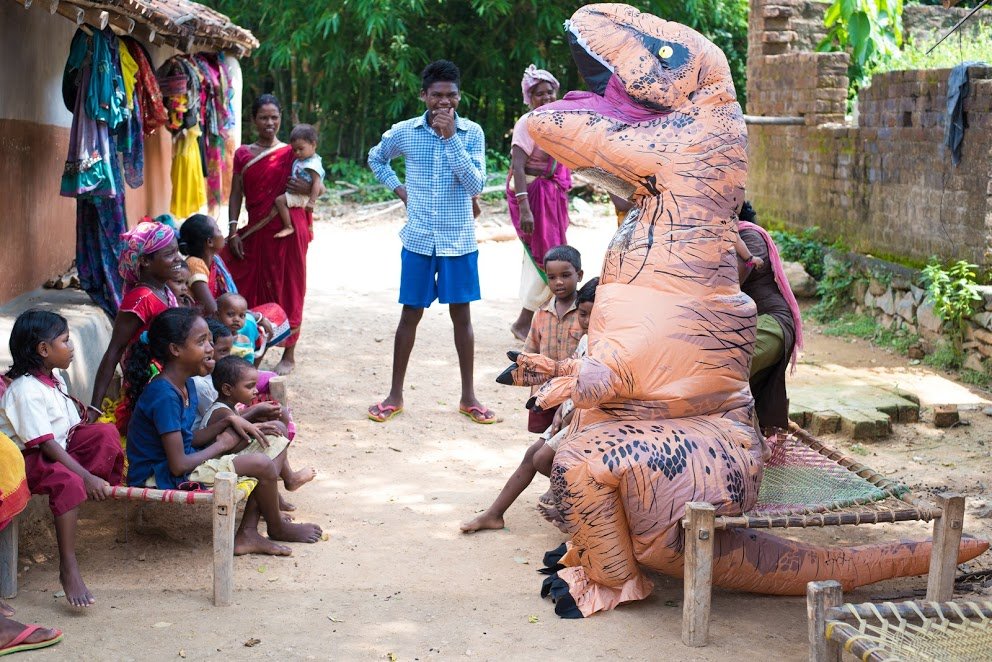 Why Is The Preservation Of Adivasi Languages So Essential?

It is language which distinguishes one ethnic community from another. It is an important tool for mapping out the geographical identity of the speaker, particularly in a crisis situation. Apart from socialisation, it also fosters cohesion and solidarity among the members of the community.

According to UNESCO, “The extinction of each language results in the irrecoverable loss of unique cultural, historical, and ecological knowledge. Each language is a unique expression of the human experience of the world. Thus, the knowledge of any single language may be the key to answering fundamental questions of the future. Every time a language dies, we have less evidence for understanding patterns in the structure and function of human language, human prehistory, and the maintenance of the world’s diverse ecosystems.” 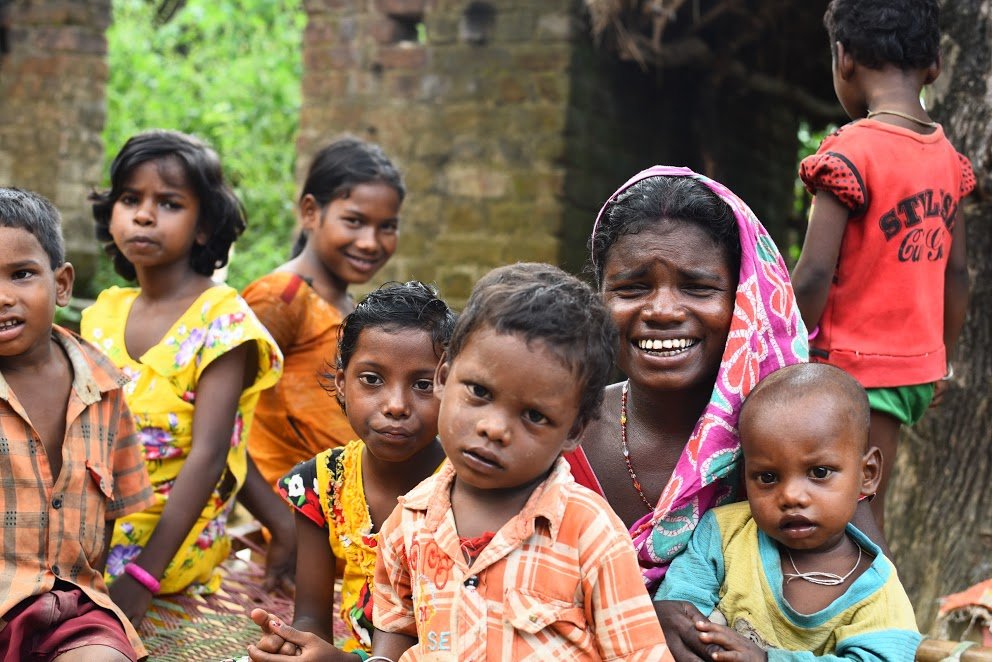 How Can The Adivasi Languages Be Saved From Extinction?

No one person can shoulder the responsibility of preserving Adivasi languages. It has to be a combined effort of people from different walks of life who can help influence others in their own circles.

With the help of this informative article, we have put together recommendations for educators, parents, communities and schools on ways to preserve indigenous languages.

When it comes to schools and educators, it is important to not impose standardised syllabus on students, but include locally-relevant subjects as well.

Why Is Karmatraveler Championing This Cause? 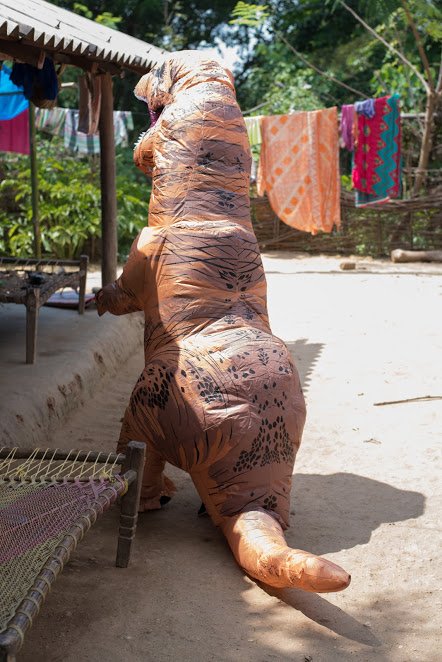 Last year, I undertook a 2000-kilometre solo cycling expedition through Odisha and Jharkhand. During my journey, I stayed with and interacted with Adivasis from multiple tribes, in different villages. While I understood the issues that are severely affecting the lives of the Adivasis, I also realised the richness of their indigenous languages and traditional knowledge.

In an effort to promote ‘development’ in the Adivasis’ villages in India, these communities are left with no choice but to seek education in non-native languages – and adapt to imposed traditions and customs that they aren’t accustomed to. All the while, little is being done to actually stop their languages, customs and knowledge from becoming extinct.

The dinosaur will travel to the Adivasi villages of India – spreading the message of conserving Adivasi languages, traditional knowledge, customs, and folk art. You can follow her journey on Instagram. Please share the article, so that we can collectively save the beautiful diversity of our indigenous languages.  If you would like to call her to your village to speak about something important, do let me know. I’m the dinosaur’s manager – and yes, I speak the dino tongue too!