Who Will Answer For This Family Burning Themselves Alive? 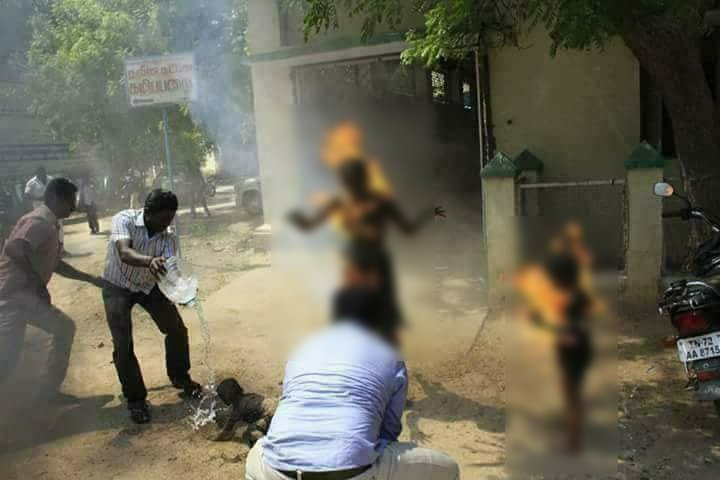 This is a picture from the southern part of India. As you can see, on October 23, 2017, a man named Isakimuthu, along with his wife and two daughters, set themselves ablaze in front of the District Magistrate’s office to protest their torture and harassment at the hands of a money lender.

When I saw the update on my Facebook timeline, I found it disturbing. My mind was not willing to accept the fact that these images are from India. I was unable to comprehend the incident – the image of an Indian child covered in fire and smoke.

I quickly googled the name of the state which was mentioned in the update and clicked on the news option for verification. I was praying that it would be propaganda or fake news, but as with all prayers, God did not listen.

In the Google news results, I found that this unfortunate incident had indeed occurred in the Trinuveli District of Tamil Nadu.

I became emotional. My thoughts were filled with anger. Some of the questions which popped into my mind were:

I started to blame almost every person I know: the brainwashed guy who blames the 500-year-old kingdom for every current problem. The politicians, the celebrities, the rich, the poor, the millennials. Then, suddenly, I put the blame on myself to reduce my anger. However, as a result, I found myself in the same position as all the people I was blaming in the first place.

I wanted to write on the issue because I cannot ignore it. After editing out all the adjectives – such as scoundrels, oligarchs, bastards, devils, demons etc – that I used for the politicians, moneylenders, and other groups in my first draft, I looked again at the image with a sense of responsibility and asked the question: Am I capable of doing anything to stop these incidents from happening in the future? What could possibly happen if I put my opinion forward on the incident? Would my shallow understanding of private lenders add to the chaos surrounding the issue? What should I do then? Should I ignore it? Should I just find a group to blame for the incident?

I did not get any answers from my reflection – just silence.

Securing Livelihoods For Migrant Labour And The Rural Poor

We Live In A ‘Modern World’, But Not When It Comes To Accepting Interfaith Marriages