The past few days have been emotionally very taxing for all of us, men and women alike. Slug-fests are many, while acceptance is visibly less.

What we mustn’t also forget is the fact that if ‘the list’ were re-wired, some of us would come out guilty and accused too. While I understand there is a certain clinical satisfaction in watching our traumatisers get called out (and there must be), it is also an occasion to think about the boundary between the ‘traumatised’ and the ‘traumatiser’. Like all lines, it is but a shadowy realm which can be crossed over very easily – and often unknowingly.

I write this being conscious of my class privileges and position as a woman. I have exploited a lot of people for my gain – domestic maids being foremost on the list. Often, I have been violent to them for the smallest of things, because where else can you throw anger and not receive it back? I must also admit to my ableist stance in most matters – I have demeaned and laughed at a lot of people who may not fit into the ‘intellectual classes’.

Lets talk about ‘the list’ now. Raya Sarkar, a Dalit lawyer and activist, brought together a crowd-sourced list of ‘academic predators’ – and it has sent the ‘savarna feminist’ world into a spiral. What led us here?

To chart the ‘Constitution’ of any ideological subject, via the socio-political-economic nexus it operates in, is the work of any onlooker of culture. Understanding relative structures of power and breaking down their epistemological fractures requires us to engage with binaries. These binaries do not dry up pro tanto – neither can it end when we look away. Therefore, to come to the conclusion that by ascribing to feminist politics, you are giving in to the divide is short-sighted. Binaries have existed and will exist, because they are the structures upholding the rhetoric of ‘the common good’, which is also the raison d’etat. Institutions merely reinforce this rhetoric – and more often than not, the greatest minds of our generation (and the ones before us) have done their bit to further the generalisations.

Aristotle saw the ‘master-slave’ relationship as natural and conducive to the human race – think of the ‘refined Greeks’ and the ‘barbaric Asiatics’. But why go that far? There are calls made to heaven and hell to justify and propagate the caste system, where one group is superior to another because that is ‘natural’. The usual becomes customary. What is declarative violently enters the performative realm. It is this custom that blinds the vision of an egalitarian society.

Patriarchy falls under this category too. As an accepted norm, women were made to occupy positions inferior to men – socially, culturally and sexually. With ‘norm’ being the word of choice, there comes a hint of ‘voluntary surrender’.

As JS Mill rightly pointed out, men simply do not want the obedience of women, they also want the sentiments. They do not just wish for a slave, but also a willing one. These ‘desires’, resting on the backs of patriarchy, are forwarded through education, didacticism and through love. The idea of maintaining a stoic, ideal life, full of self-abnegation, is central to lessons for women, right from school. The clever binary between the ‘angel in the house’ and the ‘devil in flesh’ (from Victorian literature) feeds into the nature of self-patrolling and control.

When it comes to love and comradeship, there seems to be an indefeasible tie between ‘dependence’ and ‘sentiment’. A woman’s pleasure and her social ambitions are supposed to find their conduit in a man. This excessive privilege and ownership of a woman’s body, her mind and her thoughts masks itself as ‘puerile’ love or ‘healthy’ sexual desire. But the story is far wider than that.

At this time in history particularly, we are both perpetrators and victims of a relentless gaze which gets specially confusing. It is our complicity and quietude that has resulted in centuries-worth of oppression, and has arrogated absolute power in the hands of men.

I am not discounting the pressure this has had on the male psyche – with a social aspiration to be violent and philandering (ample recourse to ‘nature’ and ‘norm’ to justify that these two are used) – and any aberration from this seems to harm their sense of self. A lot of men and women who claim to be ‘allies’ are reeling under the yoke of patriarchy (which is intrinsically tied to privileges, both class and caste). Once called out, there is a complete reversal in their stance.

Maybe that is why feminism is (an awareness of) ‘cancer’. Maybe it signals you to introspect.

A ‘friend’ called me in the middle of the night to talk about his drug abuse – and ended up wearing his libidinousness like some sort of achievement (very characteristic of the masculinist, toxic ego). Noted feminist Sanjukta Basu put up a status condemning women for ‘calling out’ lewd comments and passes men make. Thus, this screenshot would be ‘normal talk’ in the liberal feminist world. 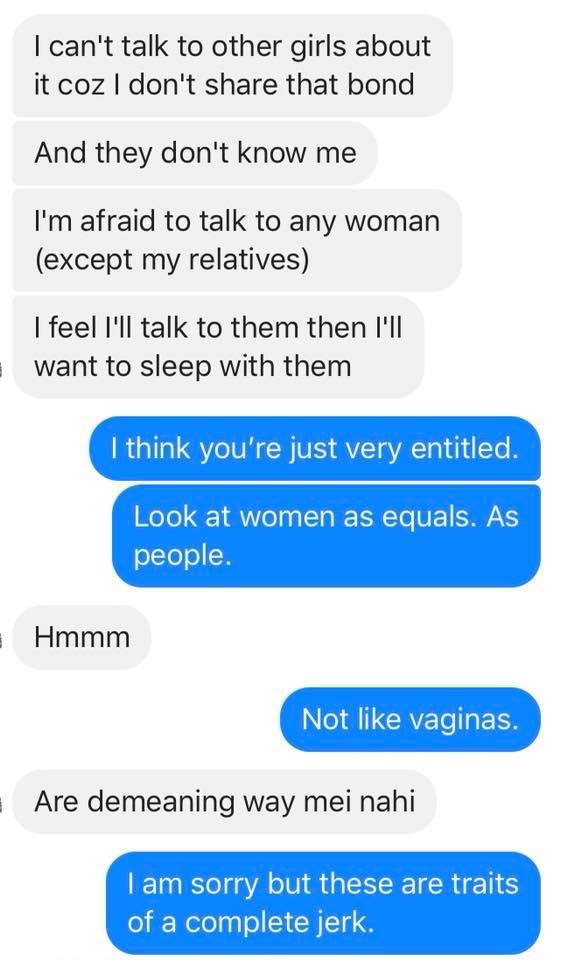 ‘The list’ also exists for every profession. Please do not even get me started with the kind of male entitlement that runs through the hospitality and PR industries. The one year I worked in PR (and for a 19/20-year-old, I was quite successful) I cried almost everyday. It was only because I had an extremely supportive (now ex) partner that I found the will to quit and realise the ghastly structures of systemic exploitation that are normalised in the industry. I will probably always be indebted to him for that.

To have your worth compromised everyday with 4 AM messages from a bevy of food-bloggers, restaurant owners and other ‘senior’ (of my father’s age) PR agents is kind of routine. In my experience, the only way you’ll ever get anywhere is by smiling all the time and never calling these people out. Payments are delayed and even stopped even after your projects are long done because you’ve been too professional and haven’t responded to their flirty overtures. These ‘larger Kafila feminists’ are wrong if they think procedural committees even exist in industries like the PR industry. This is one such example where their critique fails.

Also, who made these ‘larger feminists’ the locus standi on disowning a person’s narrative? Abuse comes in a lot of forms – and perhaps, the reason so many women prefer staying quiet is because when their own kith and kin are accused. Women take up patriarchy’s dirty work. Their complicity, silencing tactics and being on the side of the oppressor makes me think of all their ‘feminist hogwash’ as a book-selling/PhD-producing tactic, which is far removed from any attempt to engage with the problem seriously.

Looking at the state of upper class, upper caste, selective, hyphenated feminism has never been so much a moment of curtain-lifting hypocrisy.

Also, much of what constitutes a ‘visible violation’ of one’s body is institutionally sanctioned and justified. The medical and the beauty industries are the worst examples. Think ‘pressure points’ during chirotherapy, hands inside your shirt during a ‘massage’ that comes with a hair spa, and so on. What does one do in such situations? ‘This is how it’s done’ would be the one-stop reason to shut anybody down. While we (uselessly) debate on the ‘legitimacy’ of reports of abuse, let’s not forget about the questions we are ignoring – those concerning the rather thin line between ‘abuse’ and practice, and how the two are sometimes ratified and implemented with ‘due process’.

Thank you, Raya – you have ignited a spark. So many simultaneous arguments have found space now – which otherwise stayed in the realms and confines of elitist classroom lectures. Jai Bheem!