We Went On A Holiday To Kashmir, And It’s Nothing Like The Way Media Shows It

While waiting for our partners (whose flights were delayed) to arrive at the Srinagar airport, the wife of a Border Road Organisation (BRO) personnel in the waiting area alarmed us with the above-mentioned statement, upon discovering that we were tourists. What followed the conversation was mindboggling.

While we were distancing ourselves from the lady, feeling a bit awkward, a much-unexpected text message popped up on my cell phone, saying, “Our flight is delayed by another hour.” It was from the couple we had been waiting for, the ones who were to accompany us on this little reluctant trip to what is said to be ‘heaven on earth’.

Reluctance, because Kashmir, for almost the last three decades, has become synonymous with ‘dangerous’ – and hence, the trip to this state atop the north of the country was not like any other trip that we had taken this year. To make matters worse, on top of these uneasy prejudices, the indefinite delay of the flight coupled with the warning from that lady had already started making us feel more insecure about our stay for the next four to five days.

Nonetheless, after grabbing a quick bite from a local canteen outside the airport, we asked our cab driver (sent by the hotel) if he would prefer dropping us off and then coming back again. To which, Riyaz (name changed), the driver, smiled and replied with an accent, “Sister, let them come. We all will go together.” We were appalled at his patience. He had been waiting at the airport for the last three hours already, as our flight too had landed a bit late.

Finally, we all started towards our hotel after going through a checking procedure we were not very accustomed to, outside the airport area. The sight on the street was unlike anything we had ever seen before. Army men on both the sides of the streets, standing tall with huge guns and heavy jackets with innumerable pockets, ornamenting the place like the Chinar trees would have years ago, I suppose. 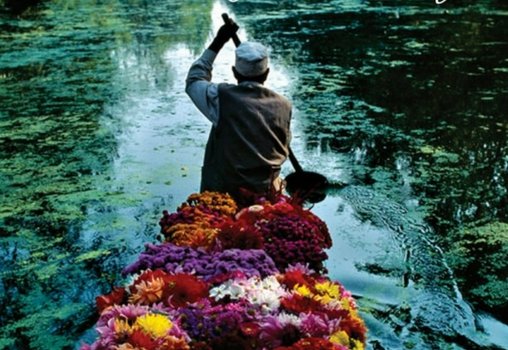 Anyway, after we checked into our hotel and somewhat put aside our mental discomfort, we decided to relish a plate full of delicious mutton rogan-josh with some boiled rice and set off for the most famous shikara ride on the Dal lake. From this point onwards, we were to be taken around by Nazir (name changed), the driver, who was to accompany us for the rest of our trip until our departure.

On our way to the lake, I reiterated the statement of that BRO personnel’s wife and told everyone to be cautious and not to get into any kind of argument. Nazir, without understanding an iota of what I was talking about (as I was speaking in Bengali), intervened and said, “Sister, bargain as much as you can with the shikara-wallahs.” What followed was an unexpected experience.

The shikara-wallah we picked took us for a ride and assuaged some of our inhibitions. Firstly, the way he greeted us was something a tourist in India can rarely expect from any other part of the country. I am saying this after having visited almost every state in the country and a few countries abroad, as well.

Secondly, after we told him that we wouldn’t be interested in shopping on the flow, he didn’t let any shopper-boat talk to us for more than 30 seconds.

Thirdly, he offered us the best of the kahwa (a Kashmiri tea, made up of 11 spices) and lastly, he did not begrudge us to leave the shikara, despite the fact that without realising, we had crossed the time-limit of two hours. By the time we were out of the shikara, it was already dark and the day ended with a delicious Kashmiri dinner in an indigenous restaurant. The dinner was offered to Nazir as well, to which he replied, “My wife and daughter are waiting for me at home.”

The next day, we decided to traverse through South Kashmir and to Pahalgam. On our way, we also got down to shop for some apples, authentic saffron, kahwa and some dry fruits like walnuts, etc.

While we were in awe of the beauty around us, Nazir informed us that Burhan Wani belonged to this part of the Kashmir, and till date, the disturbances the media keeps bragging about usually happen in this area. Upon probing him more on Burhan, he categorically said, “The people of this area are comparatively well-off by just working for two months a year to produce expensive products like saffron, walnut, apples, etc. Thus, the rest of the months, they create a ruckus to disturb us (the residents of the north and the Srinagar areas), affecting tourism badly.”

He went on to say that last year, due to indefinite strikes following Burhan Wani’s death, the daily wagers of Kashmir, especially those from Srinagar and northern-Kashmir regions, had to take up odd jobs in Jammu and other areas to feed their families.  The narration was also corroborated by a street side vendor who was selling cheap yet beautiful shawls in an interior area of Pahalgam. He even resorted to literally beg us to buy something from him as he had not earned enough since last year.

Taking the discussion further, when we asked Nazir about the media-people showcasing how armymen disturb the innocent locals here, he giggled and said, “I have never seen army bhaijaans (brothers) disturb the innocent. Unless and until you are involved in violence, they wouldn’t disturb you.” He further added that some youths these days even snatch away the guns from CRPF jawans.

Although we did witness some very insignificant trouble on the road by the locals on the issue of braid-chopping, we had one of the best and smoothest road trips to Pahalgam and back.

That day, Nazir, took us to Khayyam Gali for a sumptuous dinner and after we insisted that he have dinner with us, he just got half a plate of Kashmiri pulao packed for his two-year-old daughter. The offer was accepted with a disclaimer that he didn’t want his family to expect him to get them something like this every other day as he couldn’t afford it. He also asked us several times if we felt bad about the kids creating a ruckus about braid-chopping on the road. I wish I could show him how those of us in other parts of the country face trouble on the road during festivals, and hardly on any human-rights issue. Nazir was probably too concerned about ensuring that we took back the best impression of Kashmir. He wasn’t aware that we were already mesmerised by the beauty of the place and the hospitality of the people here who called us “mehmaan” (guests).

The journey to Sonmarg the next day was out of this world. With the river Indus flowing on one side of the road and the Pir Panjal range on the other side, we beheld a picturesque view with our naked eyes. While we travelled until Gumri (Ladakh district) on one of the roughest roads and terrains, the view of Amarnath at one side and Devil Hill at the other side was something we would return to, for sure.

The last army base of the region at Gumri had 150 army men posted. These men face harsh winters, with temperatures dropping to as low as -15 degrees in the month of October. Upon asking about the proximity to Pakistan and the danger that it poses, the army-man serving at Café Gumri said, “Madam, this is a wrong perception. After 1999, there has been no case of any terrorist trespassing this part. Moreover, people here are very supportive including the Kashmiris and the Ladakhis.”

Further interactions with the locals there also made us hear some laments on how their major source of earning – tourism and Amaranth yatris – had been badly affected due to the state government’s apathy and the stupidity of local youths in some parts of Kashmir.

On coming down to our base at Sonmarg, one of the pony-wallahs in a local snacks hotel categorically said, “We have nothing to do with any politics or religion. We want peace so that you people come and we can feed our families.” And it would certainly not be an exaggeration if I say that this statement was echoed in almost all the spots we visited in Kashmir in a week’s time. Even a J&K policeman while doing a regular check-up at a post, invited us for tea and requested us to tell everyone we know that we had visited Kashmir. He ended the request with the statement, “Hum aapke liye hain (We are for you).”

The penultimate day unveiled the beauty of Gulmarg to us. However, Nazir had warned us not to fall for any kind of trap from the pony-wallahs and the guides. He had asked us to just visit the government ticket counter for the gondola ride and explore the rest by walking. However, to our surprise, once we said “no” to the pony-wallahs or the guides, they didn’t howl around us like the people in some other places we have visited.

On our way back, we again decided to take a final shikara ride before taking off for our routine lives in the NCR, the next day.This time, the greeting to the shikara was way warmer than the first day (probably because, by this time, we had shrugged off all our prejudices), and we chose to have a street-side dinner in a make-shift market opposite to the lake. This time, Nazir accompanied us to the table, but ate less than what he would have normally eaten. The electricity went off in between and in the next ten seconds, we had the headlights of Nazir’s car illuminating the dinner table. One could not have been more touched.

By this time, we were in so much love with the place that we were upset with the idea of going back. However, with emotions showing in our eyes, we set off for the airport the next day. On the way back, I told Nazir lightly how good it would feel if Amitabh Bachchan comes here and says, “Ek din to guzariye Kashmir mein (Spend a day in Kashmir).” To this, he confidently replied, “Ma’am, if you all have felt good, then inshaallah (by God’s grace), everybody would, bus halat thik hojayen, Amitabh ki zaroorat nahi hogi (We don’t need Amitabh to sell J&K, we just need peace to prevail).”

By the time we entered the airport, we spotted this board in an army area adjacent to the airport, with the following statement scribbled on it: “No trespassing, violators will be shot dead.”