How One Organisation Is Restoring Thiruvannamala’s Sacred Space

By BitGiving in Environment, Latest

We live in a world that is slowly becoming worse every day, as natural resources are being depleted rapidly for our personal gains. Take Delhi for example: once a beautiful place, it is now one of the most polluted cities in the world. Where there were once trees, now there are concrete jungles.

Each year India is losing nearly 1.9 million hectares of forest cover and it won’t be long before the country’s forests are depleted entirely. Forests are essential to maintain a balance in ecosystems. 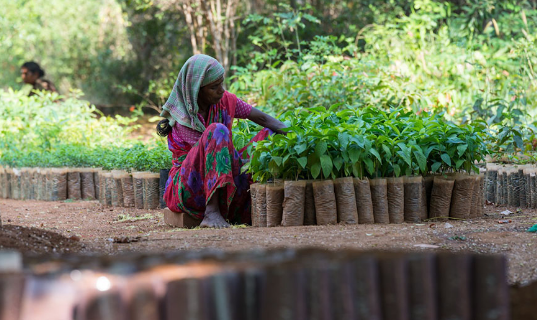 Organisations are striving hard each day to preserve what development has tried to destroy.

The Forest Way (TFW) in Tamil Nadu’s Thiruvannamalai is one such organisation, working hard every day trying to regenerate a forest on the sacred Arunachala hill. They plant 15,000 trees a year, and create and maintain fire lines over 20 km to prevent wild and man-made fires from spreading on the hill. They also raise 25,000 saplings of native species each year along with holding educational programmes for local children. But all this has come with its own challenges.

“Our operations took a major hit this year when Thiruvannamalai suffered the worst drought it has seen in 140 years. It resulted in a drying up of water bodies and the loss of plant and animal life. Our usual plantation efforts also had to be stopped.”

Although, in August, they managed to restart their efforts since there was a bit of rainfall, they still have a long way to go towards compensating for the damage caused to the wildlife there. They also plan to restore a lake nearby.

“We have now also taken up the process of restoring a lake (Thamarai Kolam) which is home to many species of water birds. This lake and its surroundings have been left neglected leading it to be used for nefarious purposes. We wish to reclaim this lake for the community and are planning to take this up in stages.”

Not only does TFW aim to bring back forests, the project will also generate employment for 50 local families by using locally available material. The project will entail building an embankment for the lake, resting areas for the elderly, plant trees, a walk-way and some playground equipment for kids – kind of like Thiruvannamalai’s own biodiversity park. But they need all the help they can to reclaim the area’s precious natural resources.