Drug Addiction: The Problem In Kashmir No One Is Talking About

By Freelencer Journalist in Kashmir, Society

For the past two decades, the people of Kashmir valley have been trapped between the Indian army and militants. This long drawn conflict is responsible for the deteriorating mental health of the people and the drastic rise of drug abuse in the valley.

Drugs continue to ruin the lives of thousands of people in Kashmir. Baramulla and Anantnag are two among several districts which top the chart of drug abuse.

The state has been badly hit by drug addiction for the last couple of years.

It is unfortunate that drug addiction in the valley has received little attention from the government, as well as from NGOs, who are just superficially dealing with the problem. It is a big social problem and needs concrete steps and strategies.

The government, mass media and other social organisations must work with great coordination, and in a close-knit manner, to nip the evil in the bud.

In the absence of any formal counselling and psychiatric help at higher secondary and college levels, many youths in the valley take to drugs.

According to a survey conducted by the United Nations International Drug Control Programme, there were 70,000 drug addicts in Kashmir, including 4,000 women. Among the student community, there were 70% drug addicts, 26% of those being female students. 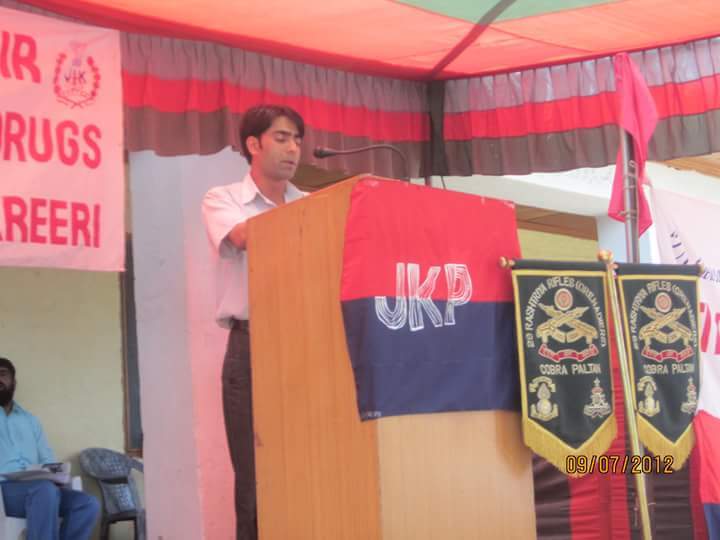 The mere slogan of “say no to drugs” will not yield any result. We have a collective responsibility to find the cause, as well as remedial measures, for the safety and security of our youth.

A study by the sociology department of Kashmir University reveals that 35% of youth between 15 to 25 years of age have taken to drugs. The innocent killings, injustice, unemployment and the drastic rise of crimes are directly or indirectly responsible for the alarming rise of drug abuse in the Kashmir.

This is a great hint to understand the cause of drug addiction in Kashmir.

It seems that an invisible hand is behind this alarming rise of drug addiction in Kashmir. Dr Sheikh Henna at LD hospital states, “Drugs go by different names on the street than their actual name in order to make communication confidential between the teens and a dealer.” The drugs are wisely and systematically sold and bought in a market.

It is to be noted that in the contemporary scenario, 80% drug users in Kashmir valley comprise those who consume prescription medicine.

The easy availability of pharmaceuticals across the counter has added fuel to the fire. There is no check on over-the-counter sales of such medicinal drugs by medical stores. Those belonging to the age group of 15 to 30 are more vulnerable to drug abuse.

The youths have easy access to such drugs. Those who are responsible for supplying the drugs are never caught.

The acute conflict, political tensions, insecurity and war-like situation in the Kashmir valley will surely increase the number of addicts.

This is a social problem and challenge, and needs to be addressed at the earliest.

The government, NGOs, civil society, responsible citizens, volunteers, and religious clerics have a responsible role to play in eradicating this demon from the land of reshis and sufis. Let us hope and pray that, one day, we will defeat the menace of drug addiction in the Kashmir valley.