First, they came for the Tribals and the Dalits, and I did not speak out—
Because I was not a Tribal or a Dalit.

Then they came for the Sikhs, Christians and Muslims, and I did not speak out—
Because I was not a Sikh, Christian or a Muslim.

Then they came for the Communist, and I did not speak out—
Because I was not a Communist.

Recently as I was reading “The Handmaid’s Tale” by Margaret Atwood, I wondered if it was correct to call the novel dystopian? The fictional story seemed too close to reality for comfort; too many women in India, and around the world, live these realities every day.

When Women Are Seen As Property And Not As People

Offred, the main character in the book loses her identity when the oppressive Gilead regime comes to power. It all started quietly when women were fired from their jobs and barred from holding bank accounts. Offred became dependent on her husband Luke. After the regime had taken over, Offred became a handmaid and her name was changed. 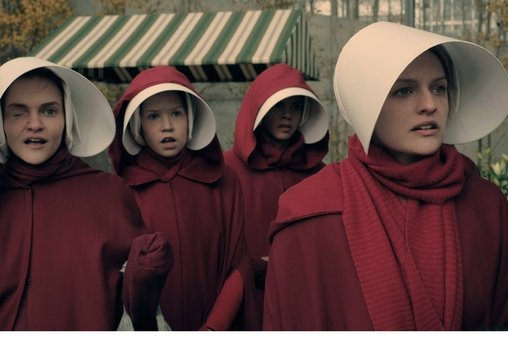 The handmaids had no other identity except for being a womb on two legs; their only role was to serve men and reproduce. Offred and other women in the Gilead universe owned nothing – they were the owned ones. Handmaids were the property of the commanders who would discard them once their turn was over or their purpose (of procreation) was fulfilled. It reminds me of several things, including the immense pressure on Indian women to marry or face the repercussions of societal stigma and shaming. It reminds me of the Hindu wedding ritual called ‘Kanyadan’ which literally translates as giving away of the virgin, to the man who marries her – indicating that she is a ‘thing’ to be ‘given’ away, a property that gets transferred to another owner.

The mindset is reflected in our language as well; daughters are often referred to as paraya dhan or another’s property/treasure. Her worth is measured in her ability to obey commands, her ability to run the house, and procreate, especially, a male progeny. In fact, in India, a husband can legally rape his wife, implying that a wife is only as good as her vagina and her consent, emotions or health, are irrelevant. Her identity doesn’t matter because globally women, by and large, adopt their husband’s surname after marriage. In fact, in some communities in India, a woman’s first name is also changed after marriage, to imply her transference to her husband and his ownership over her.

Is it too far-fetched to say that the lives of real women bears an uncanny resemblance with the life of the fictional character, Offred? Her choice, love and desires do not count. In the story, Offred’s love for Luke, her husband before the regime, or her desire for Nick, her secret lover when she was a handmaid, is not for her to decide.

Does it not remind one of the scores of honour killings in India and South Asia, or of Hadiya who is facing harassment, threats and house arrest simply for daring to choose her own life partner? There is an inability to love fearlessly and unabashedly – without parental and khap/societal pressure, bullying and harassment of the anti-Romeo squads, accusations of being victims or collaborators of love jihad, and without the fear of persecution from the authorities. Do these real threats to women’s autonomy and agency not make all women Offreds?

Offred, and other women in the Gilead regime had no access to health services except for checking for defects and to assess if they needed to be ‘discarded’ or not. Women had to go full-term and give birth even if those were stillbirths, because abortion was not available to them.

In the real world, in 2017, emergency contraceptive I-pills are banned in Tamil Nadu, India, on moral grounds. Women in Indiana, United States are punished even for a miscarriage. Women in countries like El Salvador and Mexico face a jail sentence for murder if they have a miscarriage, and women in countries like Ireland and Italy die because they were denied emergency abortion services (as the fetus is more important than the woman herself.)

Women in India are often denied abortion services because of a clause hidden in our law, the Medical Termination of Pregnancy Act (MTP Act), which suggests one must be married to avail abortion services in case of a contraceptive failure. This affects many abortion seekers who are vulnerable and left at the mercy of service providers and their discretion, which decides whether she receives or is denied safe abortion services. These are a few of the many examples of how this patriarchal world make laws, policies and health practices to control women and deny them agency and autonomy over their own bodies and sexuality. Medical science and gynaecology is no exception and even there women are viewed as an incubator while their larger health issues remain ignored and under-researched.

When Women’s Clothes Become A Sin

In the Gilead universe there exist others, such as, the Unwomen (whose lives don’t matter), the Marthas (the servants), the Wives of the rich and powerful, and the Econwives of the poor; I should perhaps rephrase this and say that none of these lives matter and all women are treated no better than a vagina or a womb. Each of these categories of women in the Gilead regime is given uniforms to ensure their modesty and classify them according to their utility in society.

The handmaids like Offred wore red gowns (to emphasise their reproductive function) and even the headgear ensured that they do not look at anyone, not even at other women and vice versa. Friendships and attachment between women were discouraged, while jealousy and rivalry were encouraged, especially between the wives and the handmaids; desire and romantic love were entirely forbidden.

This mirrors the countless times women in India are told to cover their faces, dress modestly, or are forbidden to wear jeans or leggings, (even fatwas have been issued against women wearing jeans). Globally, the highest blame for sexual assault against women has been singularly placed on their choice of clothing, even though this has been proven fallacious time and again.

When Women’s Independence Becomes An Offence

In the Gilead universe, women who defied social norms and took over the control of their own lives became the Jezebels. The sex workers, the ‘sluts’, the single women, the witches, the lesbians and bisexuals, the ones who challenged hetero-normative orders, the ones who claimed their own person-hood – all were branded Jezebels.

Just like in our society, sex workers live in the red light districts and brothels, hidden away, ghettoized and isolated, as these out-caste women are considered too impure for the rest of the society; there is always the threat that they will corrupt other women. The single women in India have it little or no better, as women in India are not considered fit to live on her own. There is a Hindi proverb that goes, “akeli ladki, khuli tijori ki tareh hoti hai (a single girl is like an open chest of treasures)” which highlights the threats to a woman who decides to live alone. They face judgement and stigma, they are considered to be loose and available, tempting and provoking men to violate her.

Therefore, women who decide not to marry, or choose to divorce and live on their own terms, often have similar experiences of either being unable to rent a place, face harassment or are simply asked to leave. They are considered too dangerous and abhorred just like the Jezebels.

When The Real World Resembles A Novel, It Is A Wake Up Call For Us

The world we have inherited seems dangerously similar to “The Handmaid’s Tale”. The rising right-wing fundamentalism across the world is further pushing women’s rights back and whatever gains have been made so far seem to be under attack.

In India, it is increasingly common to read about the Hindu mobs lynching Muslim men and not sparing children too. It is common to hear calls for bans because something hurt someone’s caste/religious sentiments. It is increasingly common for there to be attacks/trolling against women, using extremely foul language, including death and rape threats.

Leaders of the ruling regime have attacked the Indian Constitution and called one of the foundations of our democratic system, ‘secularism’  a lie; these are all signs that it is time to speak up and act now. These current trends are regressive and pervasive, they are present in our cultural norms, laws, politics, policies, and scientific discourses. They reinforce the idea that some people, including, women are lesser beings. These developments reinforce the idea that all women are Jezebels, Unwomen or Econwives, and we are all ultimately Offreds.