One Year Of National Anthem In Theatres Couldn’t Unite Us, Or Make Us More Patriotic

By Apoorva Shrivastava in Society

Benedict Anderson, in his notion of the nation as a political imagination, probably could not foresee that the symbolic gesture of playing the national anthem in cinema halls might become a determining factor. As we approach one year since the historic judgment where the Supreme Court said that cinema halls need to play the anthem before the screening of any film, we should recheck the validity of this decision.

The rule is still there in the cinema halls as a symbol of Patriotism. The court has, since then, questioned the moral policing that is implicit in this rule. The BJP nevertheless has maintained absolute silence on the matter.

As it nears its one year completion, this verdict is now coming back as a boomerang.  Last December, eight people were thrashed for not standing up for the national anthem. As reported, the assaulters continuously made sexist remarks, while glorifying ‘mother’ India. 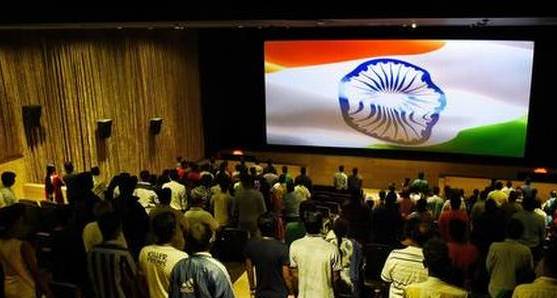 The actor-turned-politician Anupam Kher questioned the upbringing of people who refused to stand during the national anthem. One Indian cricketer, Gautam Gambhir, said that if people could stand outside restaurants for more than 30 minutes, then they should be able to stand for 53 seconds.. The comments in favor of the verdict were so loud that any voice of dissent was termed ‘anti-national’.

The major contention here is not the time duration; rather, it is the compulsion of imagining a sense of ‘nationhood’. Even if the government thinks that standing for the anthem may work as a uniting force, it is still wrong in a substantive way as the meaning of the song is not clear to many Indians. The song was written by Rabindranath Tagore but it fails to resonate culturally and linguistically with many people from south India. The single reference to ‘dravida‘ does not inject enough passion.

While interviewing the audience at Ranchi regarding their feelings about the national anthem being played in cinema halls, I found that though they did not have much problem in standing, it hardly made them feel excessively patriotic. Rather, the anthem has become more normalised and common.

Women In Sports Don’t Have It Easy, But They Still Persevere

Budget 2021 For #AtmaNirbharKrishi Towards New India