Trolled For Sex Joke, Erotica Blogger Explains How Women Can Own The Internet

By Vivek Kumar in #NoPlace4Hate, Sexism And Patriarchy

How about a joke on a man lying to his girlfriend about how long men usually last? It could be funny, right? But what if the joke is narrated by a woman?

Well, if it has been cracked on social media by an Indian woman, she will soon be labeled a slut, prostitute or whore. This is what Udita Pal, a young social media celebrity and an erotica blogger faced. 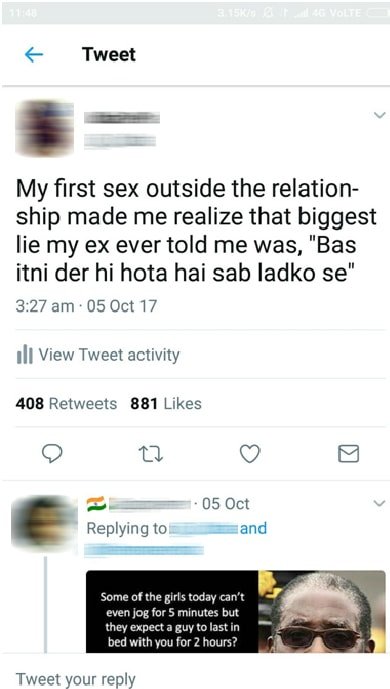 After she posted an anecdote on the subject through her Twitter handle, it was soon extensively shared by a number of Facebook pages. The response she received is a common phenomenon for many girls and women in our society.

“When the guy on whom it was targeted is took it as a joke, I don’t understand why these guys lost their shit,” Pal told me later.

As soon as the post was shared by different pages, people started commenting on her and started labeling her uncivilised, uneducated, a whore and a prostitute. 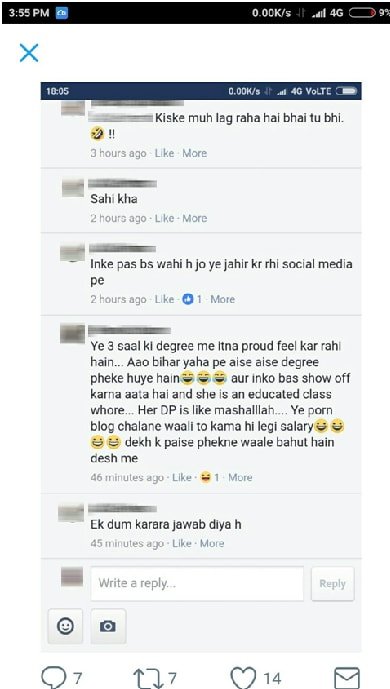 “Come to Bihar. Everybody has a degree here. This one only knows how to show it off, and she is an educated class whore,” the founder of a startup commented. He further invited a couple of other men onboard to abuse her.

“See, it’s 2017 and everyone has the freedom of speech and expression, but these young guys, who have decent degrees and decent jobs, choose to send these kinds of messages. You can say whatever you like, but slut-shaming is not an opinion. It is an offence,” she added.

Pal’s story is the story of most women on social media who choose to openly speak their mind on issues ranging from taboos like menstrual hygiene to homosexuality to politics. People abuse women or flood their inboxes with threatening messages in no time. Browsing through social networking sites, you can very easily find the patriarchal mindset of our society being reflected there.

There’s no point in talking about women empowerment if we are not able to accept their equal right of freedom of speech. “The issue is that men can make all kinds of sexist jokes, whereas when I made this joke, it backfired,” Pal says.

Our society needs to realise that women are no longer bound to behave as our ancestors demanded. Slut-shaming someone in the name of conserving traditions is uncivilised behavior which exposes one’s backwardness.

On being asked how she dealt with the situation, Pal told me, “The mistake I committed was that I replied to those comments. I should have just reported them. You should directly contact the page-admins in case one posts an offensive comment. One should try to understand the power of the ‘report’ and ‘block’ option on the social networking sites.”

Reporting helps other people too from facing such harassment online, Pal believes, and says that people should take it more seriously. “Cyberbullying is a very serious thing, but nobody takes it seriously, and even the Indian government doesn’t take it seriously,” she says.

It is essential to understand the power of social media. It is an unprecedented democratic tool for expressing oneself. But it cannot remain so if this hatred persists. We should actively use options like ‘report’ which these networking sites provide you as a tool to remove objectionable comments and posts from the internet. Law also drives fear into such people. A quick look at our cyber laws can, therefore, also be of great help.