5 Reasons To Focus On Farmed Animals In 2018

The spectrum of animal rights is vast – animals are abused for food, clothing, accessories, science, religion and entertainment. Among these, the animals raised for food, receive the least amount of attention and are the most abused.

Why don’t farmed animals receive the level of empathy and compassion that we bestow upon other animals?

Science has confirmed that farmed animals too are sentient beings, who just like us have the ability to feel various emotions.

In India, 1.2 million farmed animals are killed for food every hour. More than 180 million male chicks are killed every year because they can’t lay eggs. In 2014, more than 372.3 million cattle were exploited for their milk and later slaughtered for their meat. Here are some more startling figures.

Here are a few reasons why we also need to focus on farmed animals in 2018.

Having rules with adequate penalties to alleviate the suffering of farmed animals is a basic requirement which every developed country has in place. But India is still lagging behind.

The few instances when the government introduced measures in the recent past, were withdrawn or they are intending to withdraw due to pressure from the meat and related industries.

The Supreme Court, in its order on May 7, 2014, reiterated that animals are sentient beings and directed that:

The UDAW is a proposed inter-governmental agreement to recognise that animals are sentient, to prevent cruelty and reduce suffering, and to promote standards on the welfare of animals such as farmed animals.

2. Animal Agriculture Leads To Inefficient Use Of Resources

The Food and Agriculture Organisation of the United Nations (FAO) reported that nearly 805 million people were chronically undernourished between 2012 and 2014. That means the every ninth human being does not have enough to eat. India is one of the leading countries facing severe hunger and malnutrition crisis.

Our meat consumption is partly responsible for this. Approximately 80% of global soya and 40-50% of global corn crops are fed to animals in factory farms, instead of feeding people who are suffering from hunger or malnutrition.

Around 5kgs of plant protein is fed to chickens to obtain 1kg of animal protein. What we do not realise is that 20 vegetarians can be fed on the amount of land required to feed one non-vegetarian. It takes 18,927 litres of water to produce half-kilo of beef, while only 185 litres is used to produce half a kilo of apples. 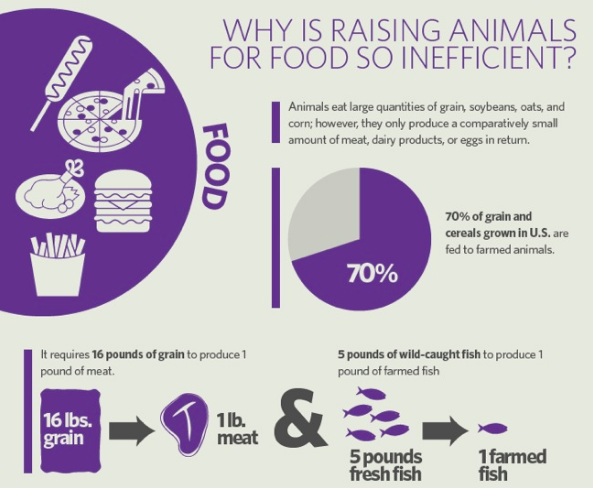 The world population has reached 7.5 billion, but if corn was distributed equally around the globe, an additional three billion people could still be fed. Yet, instead of distributing the plentiful plant food more efficiently and equitably, it is fed to western nations’ farm animals to allow meat consumption by the privileged few.

If all people on earth followed a western diet, we would need a second planet to satisfy this demand. But we only have one and, as the population continues to grow, we will have to share it with even more people.

A UN report has predicted that as many as 3.4 billion people will be living in water-scarce countries by 2025 and India will be the centre of this conflict. Another case study done in India and three other countries say there will be no drinking water by 2040 if consumption of water continues at the current pace.

Dairy, leather and meat industries are destroying our environment so rapidly, that experts fear that the damage would be irrevocable within a couple of decades. There are also numerous reports about how animal agriculture leads to water pollution. 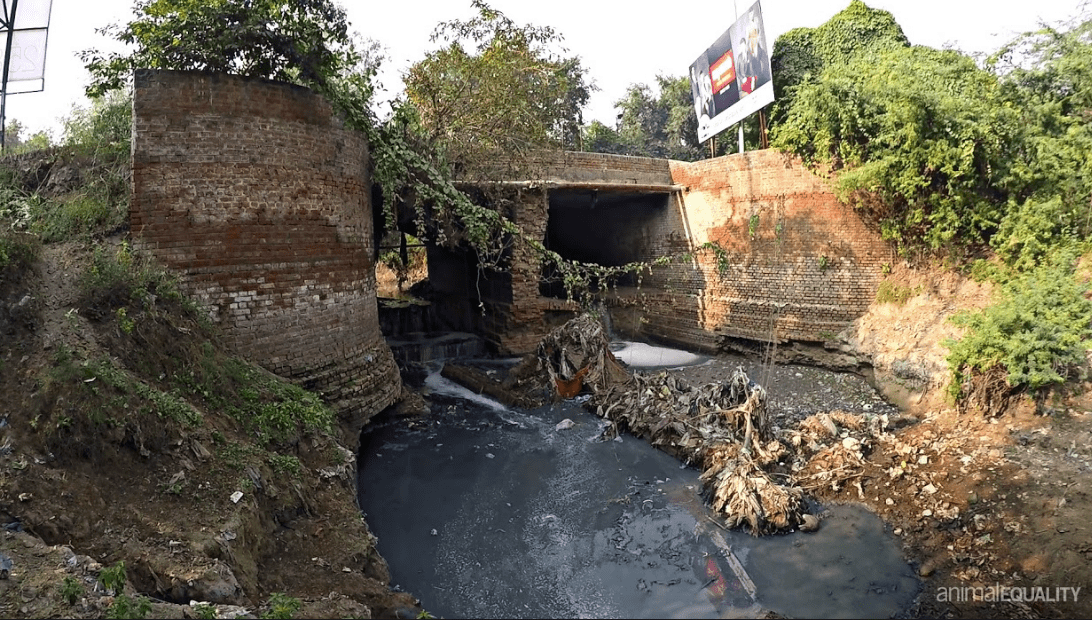 4. Illegal And Cruel Practices Are Rampant In Animal Agriculture

The meat, egg and dairy industries frequently use cruel and illegal methods to maximize their profits.

The Indian egg industry still uses cruel and illegal battery cages, where up to four to six hens are crammed into a cage the size of two A-4 sheets of paper. They often trample each other due to lack of space. Hens suffer from sore, cracked and deformed feet due to the wired floor of the cages. They are not given required medical care. It is a routine practice to mix antibiotics in their feed. The illegal practice of ‘forced molting’ is frequently practised to increase egg production. 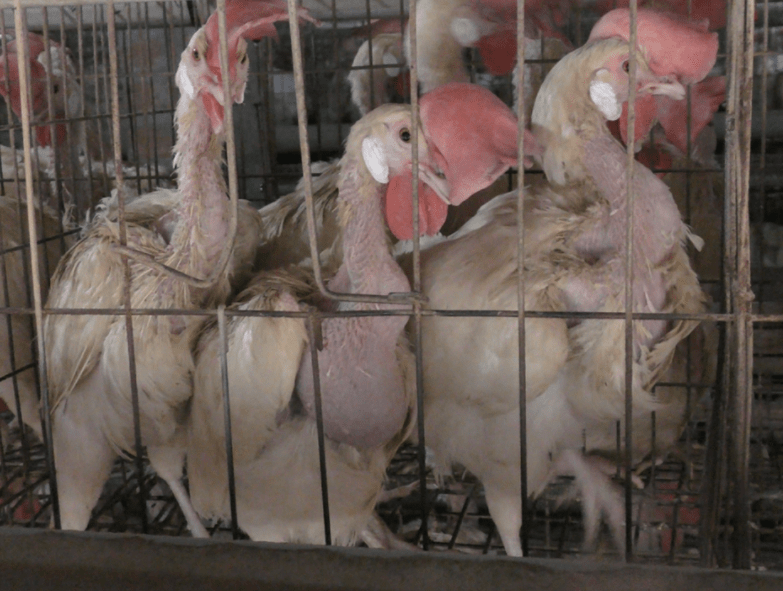 Male chicks are burnt, drowned or ground up alive because they are not profitable to the egg industry. 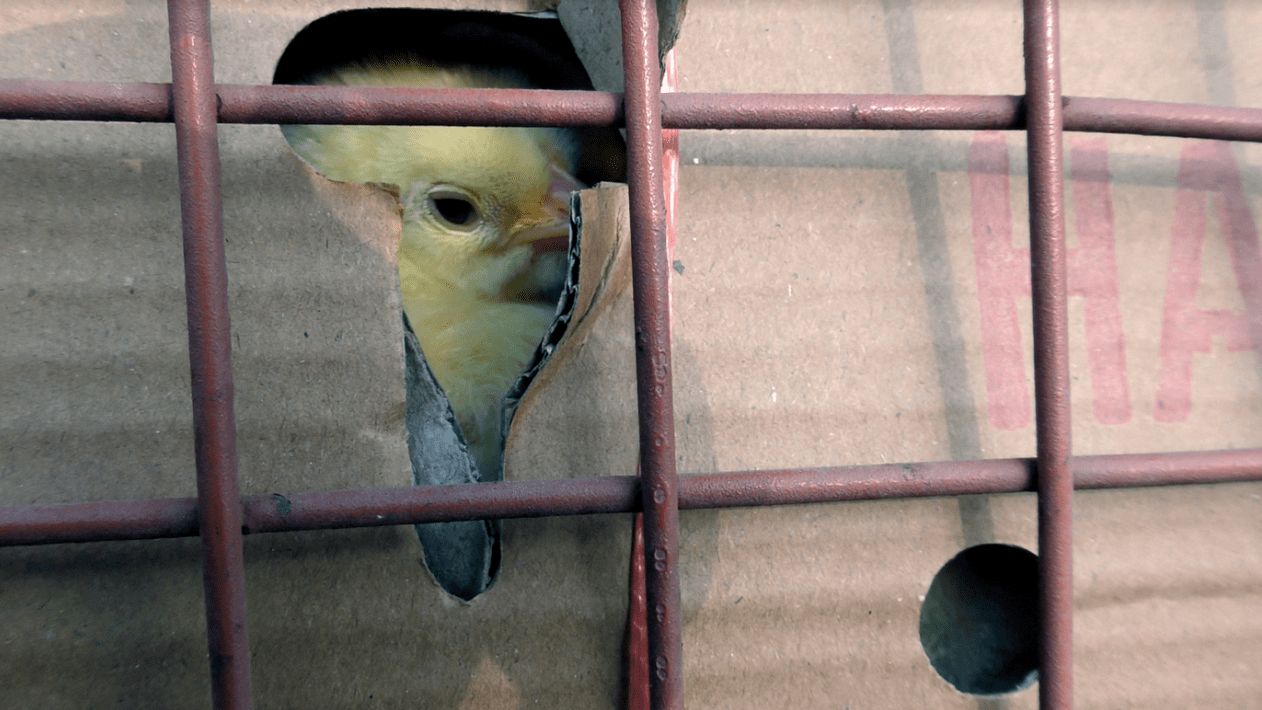 Dairies in India keep animals tied, which forces them to sit in their own faeces for long periods of time. Workers have been documented beating, kicking, punching and pinching the sensitive genitals of cows and buffaloes. 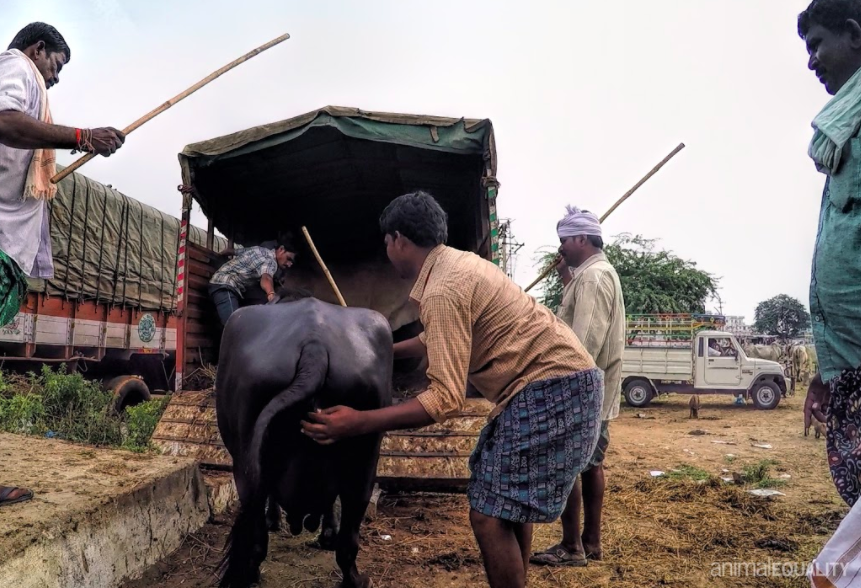 The maternal bond is the same across all mammals. But the calf is separated from the mother immediately after birth, so that he doesn’t drink any milk. This separation causes emotional distress for both mother and offspring. Male calves are either sold for slaughter or starved to death as they do not produce any milk and add to the cost of the dairy owner. 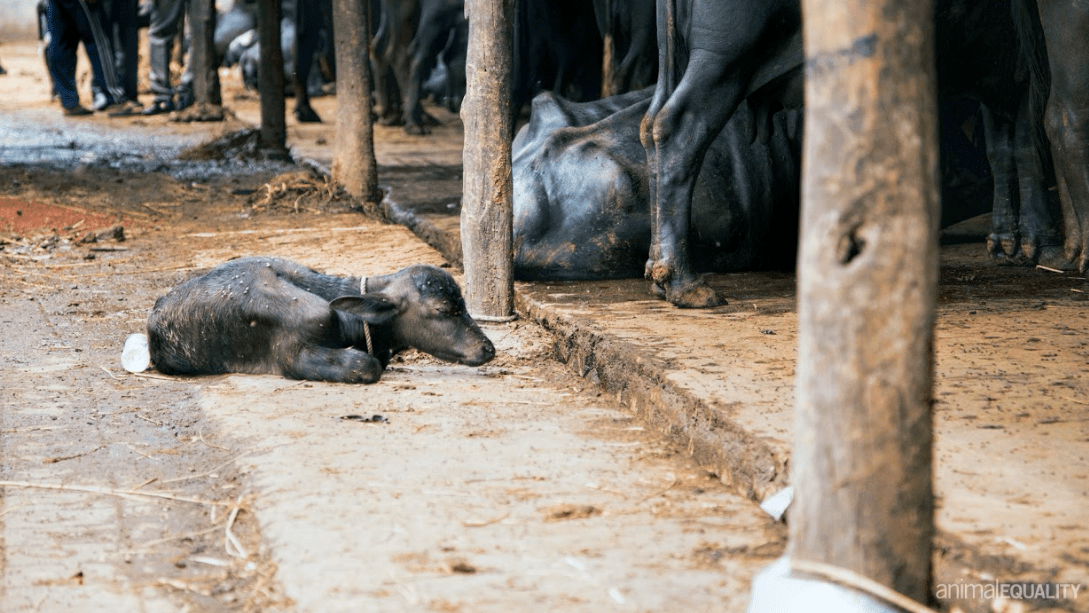 In order to save costs, the dairy owners do not provide the required medical care for animals. Many animals were seen with injuries or suffering from untreated diseases.

Chicken meat producers use illegal growth hormones and antibiotics to rapidly increase the weight of the chickens. The excess weight brings undue pressure on their legs and cripples them.

As per the Food Safety and Standards (Licensing and Registration of Food businesses) Regulation, 2011, animals including chickens must be slaughtered at a licensed slaughterhouse, but this is being infringed almost everywhere.

Veterinary official issue a ‘fit for slaughter’ certificate but workers themselves usually mark the animals for slaughter. Many active slaughterhouses are illegal and do not bother implementing the animal welfare, food safety, environment and infrastructure standards.

The Prevention of Cruelty to Animals (Slaughter House) Rules, 2001 states that animals have to be stunned prior to slaughter, which is never practised while slaughtering animals.

In the slaughterhouses, it can take many minutes for an animal to finally die. The butchers repeatedly slit the animal’s throat resulting in severe shock. It’s a routine act to kill an animal in full view of others waiting in the queue. It is also noticed that the animals are alive while they are skinned.

The commercial fishing industry is highly unregulated. This has resulted in the adoption of many harmful practices, many of which violate animal welfare laws and are dangerous for the environment. Fishermen use poison or dynamite to kill fish.

Billions of fish are confined to small and filthy ponds, where they have insufficient space to move. A process called “eyestalk ablation” is used to boost the egg production of prawn and shrimp, where their eyes are gouged out by fingernails.

Overfishing is yet another serious problem that needs to be addressed in 2018, with one survey stating that “90% of the oceans’ big fish have disappeared due to overfishing.”

At farms, dead and diseased animals are kept confined with the healthy animals. Milk, eggs and meat are derived in such unhygienic conditions where bacteria flourishes. This gives rise to many problems that most people don’t realise. Some are listed below:

Salmonella is one of the most common causes of food poisoning. It can be found in meat, milk and eggs. This bacteria thrives because of unhygienic rearing practices and lack of quality control measures. Salmonella infections cause nausea, vomiting, diarrhoea, gastroenteritis, abdominal cramps, headache and fever.

The feed for chickens is laced with antibiotics to stimulate unnatural growth rates. Antibiotics are also used abundantly in poultry, cattle and fish farms. The misuse of antibiotics has led to the rise of bacteria that have become resistant to certain antibiotics. Researchers found high levels of antibiotic-resistant pathogens in chickens being raised for eggs and meat in poultry farms in Punjab. One in every two chickens in India is contaminated by antibiotics, fostering antibiotic resistance among humans.

Traces of oxytocin found in milk have been linked to the early onset of puberty in girls.

Chickens are also being given illegal growth hormones to increase their weight rapidly. This has adverse effects on human else as well.

Sea lice are marine parasites that feed on the mucus, skin tissue and blood of fish. Infestations are an epidemic in the tightly-packed environment of fish farms. Farmers try to counter this by pouring toxic pesticides into the water.

Reports also indicate that the levels of mercury in rivers, coastal waters, soil and food items are way above acceptable levels in India. This implies that fish and fish products that we eat can be a major source of methylmercury, which has harmful effects on the human body.

This year, we’ve exposed the horrifying realities of India’s egg, chicken and dairy production by conducting studies across India, with a hope that the consumers, government and food companies take notice of the cruel and illegal practices and act on it.

Whether it’s for environmental concerns, health benefits or out of compassion for animals, more and more people are becoming aware of where their food is coming from and are eliminating animal products from their diet. The demand for vegan alternatives to animal products is increasing to an extent where a study suggests that plant-based milks in India could pose competition to dairy milk in the future.

The onus also lies on the government and the food companies to make animal agriculture sustainable and reduce the suffering of animals as much as possible. In Western countries, several measures have already been widely adopted by food companies and the government. Why is India still lagging behind?