For The Santhal Community In Bengal, Durga Puja Is A Time For Mourning

Editor’s Note: This post is a part of a campaign by The India Fellow program on Youth Ki Awaaz. India Fellows spend 13 months working at the grassroots level to bring about real on-ground change. They are also mentored to be socially conscious leaders and contribute to the development of the country. Apply here to be a part of the change.

Durga Puja – the name is more than sufficient to bring joy and thrill to the Bengalis. Durga Puja is not just a festival in West Bengal, it is also an integral part of of the lives of the people living here.

You can sense the enthusiasm and the charisma in the air – and people start preparing for the festival, 3-4 months prior to it. It is a chief topic of discussion for people at tea stalls. It also provides a competitive environment for teenagers to compete for the best idol or the best theme pandal. It presents opportunities for artists to showcase their talent – be it sculptors or theatre artists.

If you will ask your local tailor for stitching something during this time, you will probably get this answer: “I don’t have time for it, come back after a month.” Well, Durga Puja brings golden opportunities for everyone. The energy cycle starts rejuvenating as the festival comes closer. A festive spirit embraces the atmosphere and fills it with joy and happiness all around.

Even on the TV, you will come across stories on Mahalaya and devotional (bhakti) songs singing of the divine power and love for Devi Durga. Huge entertainment programs, advertisements, and news features revolving around the festival and its cheerful stories start overflowing from mainstream media. The country celebrates it in a particularly diversified manner with its many fervent citizens.

But, how many media outlets – on TV, newspaper, or the commercial radio stations – show you another side of the festival? You may have heard that every coin has two sides. Similarly, there is another faces of Durga Puja, which mainstream media often fails to show us. The All India Radio, for example, broadcasts its programmes in many different languages all over the country. However, there are a large number of small communities who have their own regional dialects, their own unique culture, more importantly, their own versions of popular stories.

I work at a community radio station in West Bengal which makes programs on local communities by focussing on them. Recently, we did a program on Hudur-Durga, a local festival which is on the verge of extinction.

Our team interviewed a key informant who knows about the ancient traditions and stories of the Santhal community. This is what he told us about Durga Puja: “For others, Durga Puja is a festival of joy – but for us, it a festival of sorrow. One of our brave warriors was killed on this day. We lost our chief – our great leader. We don’t buy new clothes or cook delicious food and sweets at our home – rather, we express condolences and grief to our lost leader.”

Astonishing, isn’t it? Yes, the lost leader is no one else but Hudur-Durga or the one we call Mahishasura. Apparently, not many people are aware of the festival, which is known as Dasai among the Santhals.

Our informant further told us: “During the prehistoric period, the Kherwals (from whom the Santhals originated before they formed their own community) had a king who ruled a land called Chaichampa. Chaichampa was a land of wealth and happiness. The people were content and lived peacefully.”

“In the midst of this, some intruders (presumably Aryans) attacked our land, but lost the battle due to our powerful and daring king. Therefore, they started conspired against him. Our ancestors never attacked women. They sensed this weakness of ours, and intentionally married one of their women (presumably Aryan) with our king.”

“When our chief was deceitfully killed by his newly-wed wife, we couldn’t do anything apart from escaping from our own land. Men dressed as women and fled the place to protect themselves from the enemies. Since that day, we have celebrated this as a martyr’s day for Hudur-Durga. Dasani existed before Hudur-Durga’s death – but at that time, it was a joyous celebration, which then changed into a festival of sorrow and grief. The songs are still the same, but the phrase ‘hay-hay’ got attached to them.”

The Santhalis do not worship Hudur-Durga. They commemorate their courageous leader and remember their abode, Chaichampa.

As our informant puts it, “For the intruders, Hudur-Durga was an enemy – and as they extended their rule over our land, they started portraying our king as evil, which later became a part of history. Even according to Hindu scriptures, we are not Hindus, and are designated as Asuras and Danavas. Our own people are forgetting our history. We don’t have any medium to convey our messages and stories to them, so that we can influence them and preserve our tradition and ancient stories.”

Do our politicised, religiously-influenced mainstream media have the courage to communicate this story in an intact way? Do they broadcast regional stories and the culture of minorities unless they make a profit? Do they take initiatives to preserve dying traditions? Do they provide assistance to those who are deprived to help them communicate their stories? Is it possible for them to communicate such stories in an unbiased manner? I am sure we all have the same answers.

A version of this post was first published on the India Fellow blog.

Saurav Verma is a 2017 cohort India Fellow, working with Mant (Manbhum Anand Nityananda Trust), a community radio station in Purulia, West Bengal. Saurav works to support the efficient working of the radio station, while also designing his own programs. 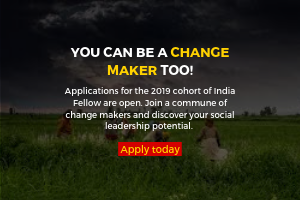