By Aseem Sundan in Culture-Vulture

Less than two months ago, a group of young poets and writers, from India and Pakistan, had an idea to collaborate and make their poetry heard across the borders. On December 17, two identical events were organised in New Delhi and Karachi by a poetry club called “The Rhyme Republic” with the same name “Sarhadaien Saraab Hon” (Let Borders Be A Mirage) at the same time. Poets from both sides performed their poems and stories of love and longing across the borders.

A joint team of poets was working in both India and Pakistan to make this happen. It was a non-profit event and the audience was not charged any money. About 90 people attended the event at Innov8 CP, Delhi and more than 2,000 people watched the live stream.

In the event, we featured some pre-recorded videos by Pakistani poets, while Indian poets performed live. The same was done in Karachi. 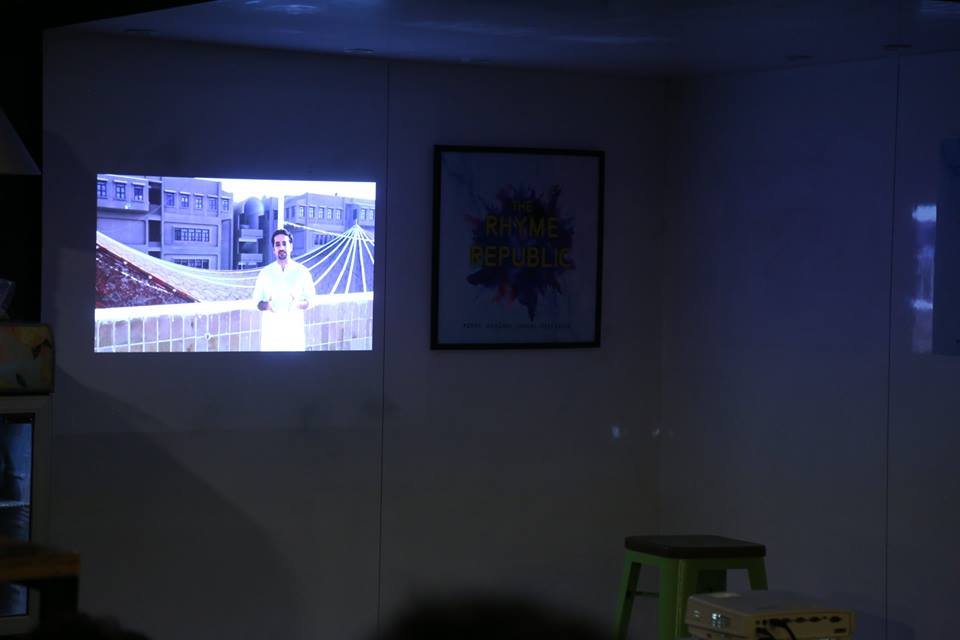 Poets From Various Parts Of India And Pakistan Came Together

Maliha Khan, who is from Karachi but based in Delhi recited a letter to ‘Bharat Mata’ that was a part of this event among many other poems and Ghazals. Nandini Mehra and Sidrah Ahmad who are from Kolkata and Rawalpindi respectively, also collaborated and recited a poem for the audience in Delhi and Karachi from Singapore.

A prime attraction at the event was the unveiling of a collaborative poetry video ‘Serendipity’ by Sahajmeet from Ludhiana and Eshah Shakeel from Lahore, who met in the US and formed a bond that no borders could break. Sahaj and Eshah were present in Delhi and Karachi respectively for the event.

There were poets from Ajmer, Ludhiana, Hoshiarpur and Kolkata in India to Lahore, Peshawar, Quetta in Pakistan. Each poet had a story or verse of partition, love or longing. The event in Delhi was dedicated to Mashal Khan, a student who was lynched in Mardan, Peshawar as the event was started by quoting Mashaal Khan’s verses “Lakeerain buhat ajeeb hoti hay… khaal pe khich jaye to khoon nikal deti hain, aur zameen pe khich jaye tu Sarhadain bana deti hai (Lines are very strange … when they are drawn on the skin, they draw blood … and when they are drawn on land they make borders.)”

A Cross-Border Interaction That Expressed Love And Longing

There was an interactive live segment wherein people from both countries interacted with each other and gave feedback on their poetry. A one-on-one led to a this beautiful moment, where Indian poets got together to sing “Dil Dil Pakistan” and the poets from Pakistan sang “Saare Jahan Se Acha”. This left everyone overwhelmed and teary eyed.

Later, poets and listeners on both sides wrote anonymous postcards to people from across the border.

One of our feedback letters said, “It was a wonderful event and I feel privileged to be a part of it. To be honest, I am numb right now. These three hours passed without any hassle. Really looking forward to attend future events and would love to be a volunteer as well, even though I am not a poet.”

We really wish to organise more such events in various cities of  India and Pakistan, on a regular basis in order to promote poetry, peace, harmony and interaction.