By Priyank Jain in #NoPlace4Hate, Society

Since its inception, Facebook has become a community for billions of people. People of all ages, from all countries, of various shades of political or religious affiliations, can be seen on the platform. Thus, it is inevitable for them to sometimes have conflicting interests, choices and opinions. Sometimes these conflicts resolve on their own, due to mutual respect among the parties involves. But sometimes, they don’t.

It is here that the real problem arises. Users from one or both parties start abusing, trolling and name-calling. And then, we are left with only two choices, which have been available to mankind since time immemorial – fight or flight. Whereas the former is usually considered brave, opting for the ‘block’ and ‘report’ feature of Facebook is usually looked down upon. Well, I’m here to tell you that using both these features is okay. 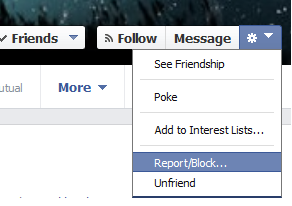 Using the ‘block’ option serves many purposes. When the abuse and trolling starts, the first course of action your opponent takes is to go through your profile, accessing any information they can use against you.

The ‘report’ option serves the same purpose. Facebook wants to keep its community clean, but it expects its users’ help to do so. By reporting a public nuisance, you can help Facebook in their task. Don’t think that your one ‘report’ won’t make a difference. It will get you the required assistance from Facebook, and you will be able to surf Facebook with a little sigh of relief.

The bottom line is that Facebook has provided us with these options for a purpose. Using them doesn’t necessarily mean that you don’t want to engage with opposing views online. It just means that you are picking your battles, and sometimes, that is a wise decision.

So, the next time a person name-calls you or your affiliation, think twice before engaging such trolls, as they already have their minds made up to drag the conversation through the mud. But you don’t necessarily have to go down too. Facebook should be a place of healthy and intellectually engaging conversations, not mindless trolling. Let’s do our part in this.