Life In A Toxic Urban Slum

By Mangesh Mani in Environment, Society

Many of us may have driven down Outer Ring Road towards Jahangirpuri and appreciated the landscaping activity that has been done on the garbage mountains along the road. At one time, it was impossible to drive down this road because of the horrible smell, but now the mountains are part of the beautiful scenery. To cover the unsightly garbage mountains, the Municipal Corporation of Delhi (MCD) has placed layers of mud and planted grass over them.

What lies behind this beautiful veil is the ugly truth of a slum. Bhalswa Dairy is an urban slum, completely ignored by the city. The occupants are mainly people who have migrated from nearby villages in search of work and refugees from Bengal. They came with dreams of a better kind of life but soon had to face the harsh realities of the city. Finding no work, and having no home to go back to, they made homes under these mountains of garbage. They go scavenging each day, looking for a plastics of all kinds, milk packets, jute boris, glass bottles, copper wires, anything that can fetch them some money. It is disheartening to see people, especially children, living in such conditions. 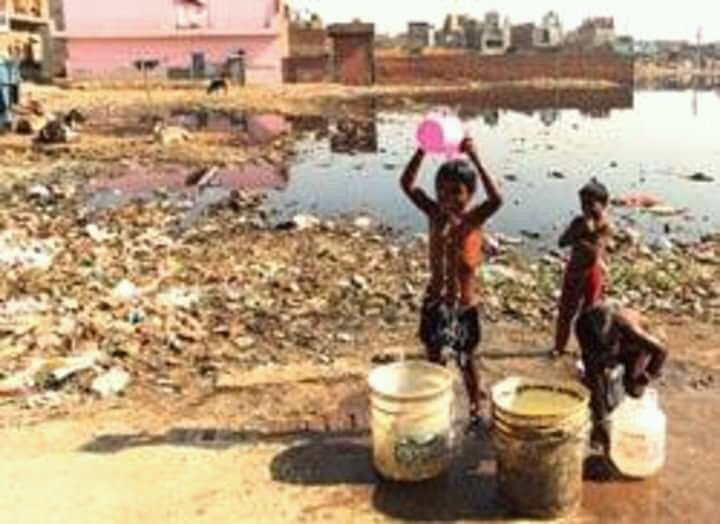 Salem is 14 years old. He dreams of becoming a mechanic. Motorcycles fascinate him. His father’s prolonged illness, which he attributes to “evil spirits”, sent his family of seven into a whirlwind of a financial crisis. To survive this, he and his mother started working as rag pickers. He dropped out of school for two years, but now after six months of remedial coaching he has gone back. He works as a rag picker in the morning and goes to school in the afternoon. But not everyone is as lucky as Salem. Many of these children never get an opportunity to study.

A big pond of dirty water has collected at the base of the garbage dump at Bhalswa Dairy. The pond water is mainly the run-off from the garbage dump and is thus highly toxic and a major health hazard to the people living there. When it rains, this toxic water goes into their homes. Mosquitoes breed in that water and children get sick often. These people have nowhere else to go, and literally live in that pond of toxic water.

I had written a letter regarding the same to the Public Grievance Commission on their online portal. The response I got is: “Mangesh Mani has reported that needful has been done.” But the toxic pond is still very much there. These people have nowhere else to go. Each day comes with new challenges and struggles. Is there nothing that we can do for them?