I Didn’t Expect To Like ‘Padman’, But Here’s Why I Did

“When she bleeds the smells I know change colour. There is iron in her soul on those days. She smells like a gun.”  – Jeanette Winterson, Written on the Body

The movie “Padman” spoke about menstruation and the need of sanitary pads for proper hygiene for a woman on her period. Directed by R. Balki, the movie was based on the life of Arunachalam Muruganantham an activist from Tamil Nadu who launched low–cost sanitary napkins. The cast featured Akshay Kumar as Lakshmikant Chauhan, Radhika Apte as his wife, Gayatri, and Sonam Kapoor as Pari Walia.

Initially, I thought I might not like the movie, but I enjoyed it. Lakshmi, a newly married man, is utterly smitten by his wife. He also has three sisters; one is married and also a widowed mother. Lakshmikant is a school dropout and works as a mechanic. The film starts on a slow note, and we find Lakshmi trying to convince his wife to use sanitary pads over cloth during the five days she bled.

Gayatri appears to be a conservative and sensitive traditional Indian wife for whom following the age-old traditions of considering menstruation a taboo is more important. Lakshmi is unable to bear the thought of his wife using dirty linen during her period. This is why he says he won’t even get his bicycle cleaned so that he can buy a pack of sanitary pads for his wife.

But back at home his wife cries in horror at the seemingly huge price tag, and she thinks it as a sheer waste of money. She is also unable to understand why Lakshmi is so invested in fixing a women’s problem. The film has bravely tackled the stigma and rules imposed by the society on a woman when she bleeds. It also brings forth the need to find a cheap alternative to expensive sanitary pads which so many women don’t have access to.

Given Lakshmi’s creative mind, he experiments on his own to make a cheap sanitary napkin. An act of stuffing cotton fails repeatedly and is misunderstood by his wife and the entire family. Says The Express Tribune,  there are numerous dialogues in the film which allude and direct the audiences’ attention to the stigma and taboo surrounding menstrual health and the overall sexist practices that surround female problems. Ultimately Lakshmi is thrown out of his village and his family, including his wife, severe ties with him. 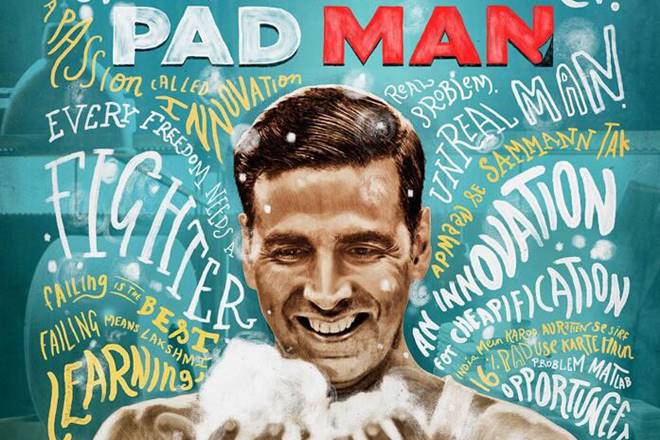 The film also has a powerful message to the young generation – never give up. Lakshmi in spite of this tremendous mental harassment still sticks to the hope that someday he is going to make the low-cost sanitary napkin for the women unable to afford a sanitary pad due to lack of money. He accomplishes his goal, and the first woman who agrees to try his invention is Pari played by Sonam Kapoor. The movie gains momentum on her entry, and she also proves to be a lucky charm for Lakshmi. It is because of her constant motivation Lakshmi achieves the pinnacle of success.

They fall in love, but Pari steps back as she realizes Lakshmi is still married. The film ends with an ‘All is well’ note where Padman is reunited with his village and family. Thanks to Pari, he battles through the lows of his life and is awarded a Padma Shri.

Arunachalam Murugunathum in one of his talks had once said, “Why do people make billions of dollars and come towards philanthropy? Why not do philanthropy from day one?” “Padman” is an important film that teaches many men and women about the importance of menstrual hygiene and talking frankly about periods. The film is efficiently paced in this regard. It does not lose momentum and does not stray from its original message.

With a box office collection of over 59 Crore, this movie indeed gives a strong message to the society about the stigma surrounding periods. Arunachalam Murugunathum, Akshay Kumar, Twinkle Khanna and all the other cast and crew’s efforts on this film will inspire many more women to break taboos, cross the mental barrier and forge ahead in long strides even when they bleed.