The Story Of Our Water Project In Rural Rajasthan, And How Access Was The Smaller Concern

By Pravah in Society

One of the major issues in the village of Nosal, Ajmer district, Rajasthan, is availability and accessibility to clean drinking water. Rajasthan suffers from a severe lack of rainfall, resulting in inadequate water reserves in Nosal. The Ajmer district is abundant in salt, leaving much of the water reserves undrinkable without pre-processing. There is a government provided water pipeline running through Nosal. However, due to an estimated 150 illegal connections, the pipeline was shut off some five years ago.

To address these issues, the volunteers of the September 2016 and January 2017 batches started a petition which was delivered to the office in Ajmer and the water was turned on for a few hours once, every five or six days. However, the irregularity and insufficient quantity of the water left the villagers reliant on tankers which regularly delivered water to concrete water tanks installed in every home. The cost of each tanker is ₹400 with some families spending up to 60% of their income on water alone. The source of the tankers is from Bilawat (a nearby village) which is also high in Flouride. Bilawat is also running low on water reserves.

The issue of water is not an issue in isolation. Nosal has around 450 households and complex demographics, especially concerning caste dynamics. People live in small hamlets divided on the basis of castes (and further sub-castes) such as Rajputs, Brahmins, Daroga and Dalits. Hence, all the issues of civic participation have been quite complex.  After understanding this complexity, one of the Pravah ICS volunteer team leader Amy Watson from the July 2017 batch shared: “After two months of living in Nosal, my team and I realised the issue is much deeper. It’s not just about a lack of access to water. It’s about a culture of inequitable distribution of resources. It’s about mistrust between the people and the institutions in charge. It’s about accountability. It’s about inequality. It’s about patriarchy. It’s about the caste system and the discrimination that comes with it. It is all these things and more. The situation is so complex that it is often overwhelming. And that’s still only scratching the surface. This is the story of our water project in the village of Nosal, and how it became so much more than that clear, life-sustaining liquid.” 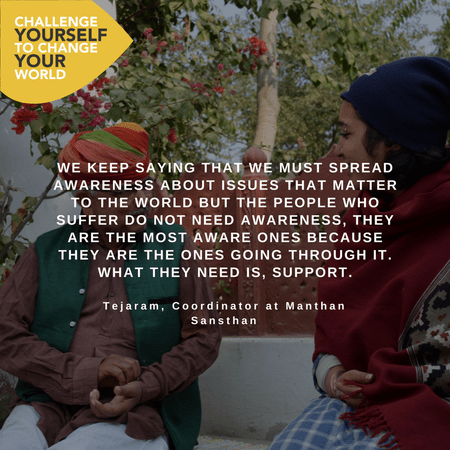 Our host partner, Manthan Sansthan, has been active since 1997 and works with the community on issues of water, health, education and towards building social accountability in the existing governance mechanisms. Since its inception Manthan has worked on issues of caste and gender which it believes cannot be separated from the issues of accessibility.

Since September 2016, three batches of volunteers have been placed in Nosal. Civic participation has been an integral part of the projects that volunteers have been working on. This is because Pravah and Manthan Sansthan have emphasised upon the fact that sustainability in development can only be brought about by taking different people along and building greater transparency and accountability in existing systems of governance.

The first batch had identified and started with putting a petition for water with the Sarpanch (elected government leader/head of Panchayat – the local governance body). They had also made efforts to facilitate a conversation between the Sarpanch and the villagers. However, it was only by the third batch of volunteers, and through consistent partnership building efforts by the volunteers across batches that the Sarpanch finally came onboard. Since then, multiple stakeholder meetings were organised and facilitated by the volunteers.

As a result of these meetings, a committee has been proposed to look at the progress of the water project. The committee constitutes of members of the community- including Dalit women from the community – against which there was an initial resistance, but that has been pushed for and accepted. The project has resulted in the following:

Inclusion: Extend The Reach Of Public Services To The Poorest And Most Marginalised

The project has opened more outlets for the water to be made available and accessible to various sections of the community and has facilitated extension of services to the most marginalised by including Dalits and women into the entire process. For example, the Sarpanch is deliberately meeting all communities in the village for the water issue.

As a result of this, in one such meeting with the Bawri community (a Dalit sub-caste), another issue about adult literacy was raised. It was observed that although there is a ‘Basic Adult Literacy Programme’ by the government, it has not been paid attention to in the village. As one of the results of this project, a night school for drop-outs has been set up in the Bawri community in collaboration with the host organisation leading to more social inclusion.

One of the key outcomes of the project has been the formation of a village committee for the water issue which has representatives from different caste areas. It is an extensive list of 21 members. These members are responsible for carrying information and be a connection between the governing bodies and the community. The entire village has selected these members increasing the participation and ownership of the issue in people. These members have taken big steps towards being more aware and active citizens.

The coming together of different people enabled a safe space to have a dialogue – especially for women in the village. Women from the village are the ones who have taken the lead on the issue. For instance, Tara, a 40-year-old woman from the Regar (a Dalit sub-caste) community who is also a committee member said during the meeting, “Most people especially the men in the village sometimes fail to understand the severity of the issue because it is women of the village who stand for hours under the sun to fill water and this issue is important for us.” Of the Pravah ICS volunteers who are working on this project, three of them are in-community volunteers, Dalit girls who have successfully challenged the way they were looked at in the community and had established themselves as leaders.  They have now emerged as driving force behind this project.

Above all, the process has given a reason for the people to be hopeful and to believe that if voices are raised in unison, they would be heard. Overall, it has led to building communication gaps and better relationships between the community and the governing body, by holding the latter more accountable. The following quote from Tejaram, Coordinator at Manthan Sansthan, sums up the impact – “This entire journey has been about accessibility to something which is essential to life. We keep saying that we must spread awareness about issues that matter to the world but the people who suffer do not need awareness, they are the most aware ones because they are the ones going through it. What they need is support. I don’t know if we would finally have access to water or not but the mere fact that the people who have taken the most lead on this issue are the ones who have historically suffered oppression (Dalits) says something, and that is why we need to bridge inequalities in the world.”

The focus of Pravah ICS is bridging gaps in the society by bringing people together, and this project is a clear representation of that. It is about the interconnectedness of different issues that impact each other and shows how important it becomes to acknowledge that things in the world do not work in isolation.

It bridges many gaps in the larger picture of development. The following SDGs have been impacted – reducing inequalities in the society, reducing gender inequality and improving access to safe and clean drinking water. While action by community members is important, it is essential that we build more accountability in the existing systems. This project also signifies the role of various stakeholders in the process of development. Additionally, the project has been a great learning opportunity for the volunteers as well, as they succinctly put it, that development cannot be a diktat from the top, and it has to flow from the bottom, and led by those who would be impacted by it. And that nobody should (can) be left behind.