When you come back from a tiring day at college or work, lie down on your bed, and message your best friend, “Bro, I’m dead,” do you think of the thousands of people who are genuinely considering ending their life at that instant? 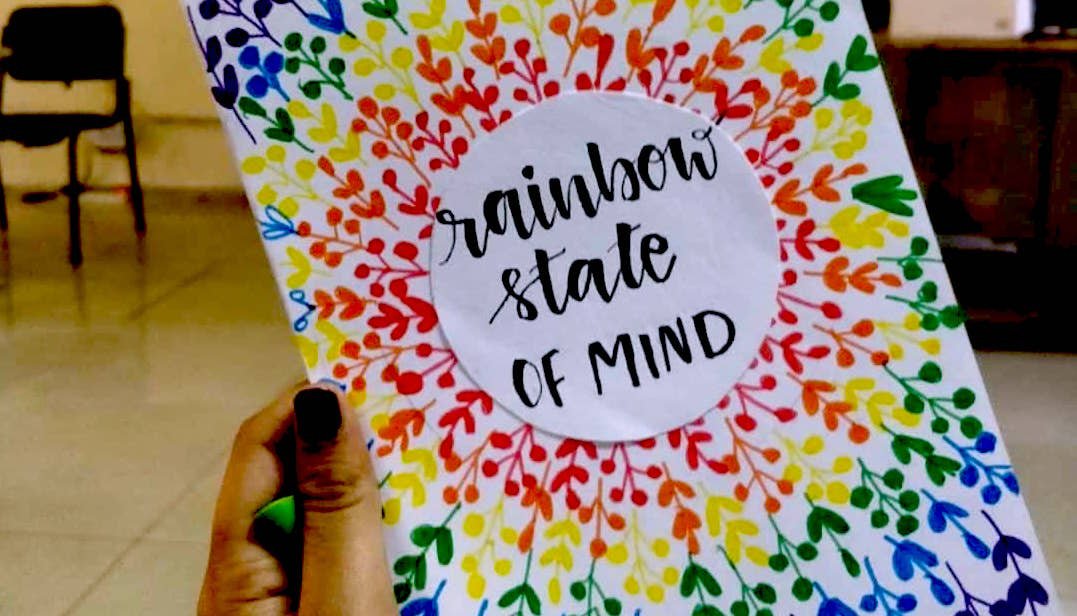 That’s why I decided to found Project Voice+, which is a volunteer-based organisation, a forum to share your stories, ideas and messages to inspire youth from around the world. Apart from sharing stories, interviews and fashion blogs, we aim to bring about behavioural change through offline events and the campaigns we run on our social media.

In collaboration with Nazariya LGBT, a grassroots LGBT-Straight Alliance, we organised ‘Rainbow State of Mind’, an attempt at providing the youth a platform to voice their ideas, concerns and suggestions, as well as make meaningful partnerships to bring about tangible change in the field of ‘gender and sexuality’. An event of interesting dialogue among the queer community and allies, January 27, 2018 was a reflection, refraction and dispersion of the most golden beam of sunlight on a Saturday afternoon. Knowledge and insight filled the cozy space of South Asian University, Chanakyapuri, as each shade of incident light bounced off its walls in all of its glory and Pride.

The four hours there were brimming with enriching, candid experience-sharing witnessed by an engrossed audience. We began with a workshop by Ipsa James, a psychologist at Karma Centre for Counselling and Wellbeing, who covered important topics such as bullying, the different genders and sexualities, the various kind of attachments, the importance of healthy relationships, and the impact that our sexuality has on our mental health. The thought-provoking session was followed by spoken word performances by Uppa Tsuyo and Angana Sinha Ray. They showered us with poetry and left us with goosebumps, and amidst the constant appreciative finger-snapping (a staple of any spoken word event!), they left us teary-eyed.

The stage was thereafter conquered by our fiery panelists, who discussed our theme, “Labels, Language and Contemporary Queer Issues”. Ipsa James and Ruchika Kanwal from Karma Centre, provided a psychological perspective to the discussion, while Ruth, the Co-Founder of Nazariya was able to highlight the issues faced by queer community at educational institutions. Shambhavi Saxena, writer and editor at Youth Ki Awaaz, answered questions based on personal experiences, and brought forth conversation around the visibility of queer individuals and a reluctance to progress from the older staunch views. Rudrani Chettri, the Founder of Mitr Trust, expressed several concerns of the transgender community and elucidated that existence and survival are increasingly necessary in a period of coming to terms with personal identity and the issue of being judged by one’s appearance.

“The Politics of My Bedroom”, an open mic session, concluded the event for the day but we hope the conversations we initiated will continue beyond it. We tried our best to create a safe-space where confidentiality was respected and people were sensitive towards differences. Around two hundred people attended this event, and if each of us take these discussions back to just our families and friend circles, we can amplify our voices exponentially.

This was Voice+’s sixth offline event, and an experience that I have personally learnt a lot from. Organising this event was a roller-coaster. From unprofessional behaviour from world renowned organisations, to breaking collaborations with misogynist “Gender Equality Cell” heads (even if it meant losing a venue), to actually understanding the privilege that I have been born into, every second of ‘Rainbow State of Mind’ reminded me why Voice+ was started, and realised how much we still need to do.

Two of our guests were stopped by guards at the gate of our venue because they are trans and appeared ‘different.’ A much bigger fight lies outside these safe spaces we create at our events. My journey as an ally started when I was in the eighth grade, and someone posted “I am a lesbian but you’ll never know who I am” on our school’s confession page. I was disturbed; I didn’t understand how loving someone could be a crime. I still don’t.

“People” are being criminalised for who they love. “People” are being criminalised for expressing their gender. It’s not about “them”, “they”, “their community”, “their rights”- it’s about us. How are we okay with this? All of us are comfortable being secret allies, in safe spaces, where everyone appreciates our support. It is not enough to get colourful pictures at Pride. Listen to those within the community. Do your research. Be visible with your support. And most importantly, speak up. Being a straight ally means letting your voice be heard, both in celebration and in support of safety. Being an ally means defending members of the LGBTQIA+ community and nipping ignorance and hatred in the bud.

Even if something doesn’t directly impact you, but you know it’s wrong, let your voice be heard.