There Was Nothing Wrong With The Grihalakshmi Cover, Trolls Just Needed A Reason

By Arun Chandra in Culture-Vulture, Latest, Sexism And Patriarchy

One of the most popular magazines in Kerala ‘Grihalakshmi’ decided to do something which no other magazine had ever done. It was a bold move and risky thing to do at the same time. The magazine featured model Gilu Joseph on its cover photo breastfeeding a baby.

The model had this fear deep inside her before committing to this photoshoot. Her fear was right, people criticized the magazine for doing a publicity gimmick. The worst part was that many users on Reddit sexualised the photo.

Addressing the controversy around the photograph, Joseph told The Indian Express that she had no regrets over her decision to pose for the cover. “When I had come across the ‘Breastfeed freely’ campaign, the makers were looking for anybody who would be willing to feature on the cover page,” she said. “I grabbed the opportunity because I have never been taught that breastfeeding is a sin and something to be covered up.”

There have been instances where the mother has to look for a corner to breastfeed her child or sometimes completely cover up, making sure that even the slightest portion is not seen.

The magazine drew flak even from women alleging sexualisation of the female body because we’ve been so thoroughly conditioned that you should breastfeed your child covered up completely. No matter how literate and liberal one will call Kerala, Malayalis are still live ages behind in terms of perceiving such things.

The Internet trolls had a gala time trolling the model and the magazine. The vulgarity and ‘double meaning’ memes which made the round only displays the regressive attitude which still thrives in Kerala society.

Some of the troll memes include, “Don’t stare at us, We need to urinate” with the picture of a lady staring at a boy/man urinating in public. While urinating in public talks about your lack of civic sense, which can be avoided, a baby can’t wait till the mother finds a place hidden from everyone in a public space. 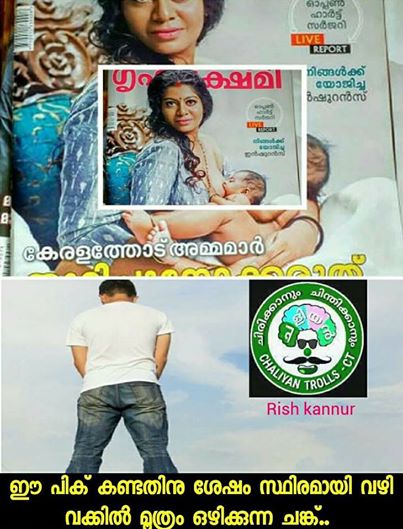 If you are calling this publicity stunt, let’s not forget the photo posted by Biju AB of his wife breastfeeding their child. I could see the same amount of reaction from people calling it as vulgar and obnoxious.

PS: I am from Kerala