While The Govt. Sings Ambedkar’s Praises, Dalits In India Are Still Fighting For Survival

By Rohit Dhyani in Latest

The centuries-old exploitation and oppression of Dalits has continued in the modern society in different ways. The political and social struggle of Baba Saheb Bhimrao Ambedkar in British India, a long battle for the respectable place for Dalits in independent India and the emergence of Dalit consciousness forced mainstream politics to pay them more attention. The Dalit community is still alone in the battle for self-esteem and dignity, and mainstream politics has exploited that vulnerability for votes. According to official figures, cases of crime against Dalits are increasing steadily.

In the past, there have been many such incidents, which led to the discussion on Dalit oppression. But as always, they have failed to stop the oppression. Their echo was heard all over the country, the Dalit society was stirred. The current Dalit Dal has changed completely, they are ready to fight against violence and raised their voice across the country. 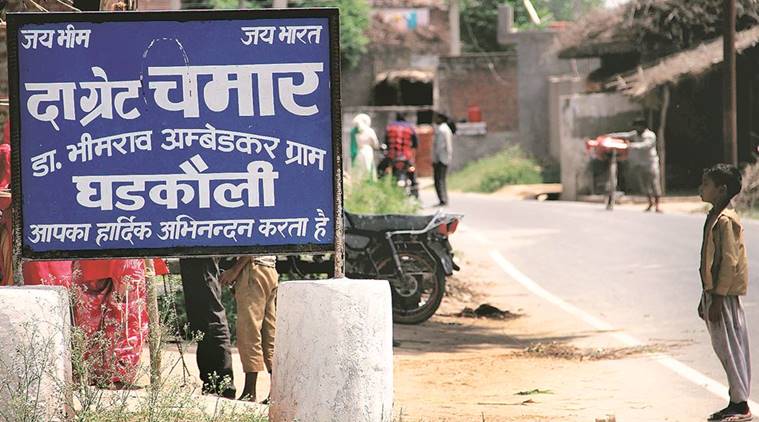 The community is no longer inclined to be a Dalit. Juhi Prakash, a Dalit activist from Agra, supported the Bandh on April 2 and wrote on Facebook, “Exit from my anti-reservation and anti-majority ID, I do not want garbage.”

According to the latest figures from the National Crime Records Bureau of India, the crime against Dalits is increasing steadily. In the last 10 years, cases of rape of Dalit women have doubled. Between 2007 and 2017, criminal cases have increased by 66 percent.

The violence of the movement and some figures from the National Crime Records Bureau constitute a worrisome comparison. It was reported that in the BJP-ruled Gujarat, Rajasthan, Maharashtra, Madhya Pradesh, Haryana, Uttar Pradesh, Chhattisgarh, Goa and Jharkhand, more incidents of atrocities against Dalits were recorded than non-BJP ruled states. Madhya Pradesh has been told the worst of all these states. More than five thousand cases of atrocities against Dalits and tribals were registered and the crime rate was twice as much as the national rate of 42. After this, Rajasthan is number two. Goa is third and Gujarat is number four. Many crimes like murder, rape, and property damage are included in this. And these are the data reached by the record bureaus, we can not know exactly how deeply the racism, the racism of Sawantist supremacy is spreading, and not knowing how many cases can ever come in light.

Since the last few days, since the incidents of violence and vandalism on Dalits in many parts of the country, anger was being dull in the Dalits. Unnao rape in Uttar Pradesh or case of Rohit Vemulah suicide in Hyderabad University, Swabhiman movement of Dalits in Maharashtra, incidents of violence in Punjab and Rajasthan against Dalits or incidents of damaging Ambedkar statue in Uttar Pradesh or Bihar – the Supreme Court’s verdict was provoked by torment. But there was also the fear that in the BJP-ruled states this could hardly be done peacefully.

In Maharashtra, the year 2018 started with the Dalit-Maratha collision. On the occasion of the 200th anniversary of the Bhima-Koregaon fight, a youth was killed during protests against its celebration. The case got caught and its flames began to be seen throughout Maharashtra. The Dalit organizations declared Maharashtra Bandh on January 3. In the meanwhile, news of violence and arson was coming from most parts of the state.

In the year 2017, Saharanpur of Uttar Pradesh remained the center of Dalit opposition. There was a confrontation between the Dalit and Thakurs in the area during the Maharana Pratap Jayanti program. This led to stone pelting, firing, and arson between the two sides. The protests grew so much that the matter reached Delhi. In the protest against racial violence, Bhim Army of Dalits performed a major on Delhi’s Jantar Mantar.

A fresh episode is about the procession of Sanjay Jatav. Sanjay’s marriage was decided on April 20 in Nizampur village of Kasganj district. Sanjay declared that he would take his baraat while riding a mare from inside the village. Thakur caste people objected to the issue and claimed that there was no such tradition in the village. In the procession, the Dalit youth was picked up while climbing the horse and barred from the procession after refuting the tradition.

In Uttar Pradesh, A few decades ago such incidents would have been suppressed, but Sanjay stuck to his procession. The matter reached the police, administration and then the court. Local administration was asked to resolve it. Eventually, on April 8, the administration allowed him. The officials made an agreement between the two sides and after fixing the arrangements for the procession and other conditions, the procession was made.

Dalit thinker Kanwal Bharti considers this trend to be the demand of time. “Look, some arrangements have been made in which Dalits have always been tortured. The climbing of a mare is mere symbolism. In Gujarat, a Dalit was assassinated only for this reason because he had boarded the mare. Sanjay is fighting. Now the Dalits realize the rights, so the struggle is going on.”

The recent Dalit movement is different from all previous struggles. The reason for this is the amendment to the SC/ST (Prevention of Atrocities) Act decided by the Supreme Court. This news spread through social media. Supporting the bandh, though the new emerging Bhima army and Mayawati’s Bahujan Samaj Party, apart from the other opposition parties, but there was no such institution which could make full claims.

The Supreme Court had said in its decision on March 20 that arrest of a public servant under the SC-ST Act cannot be done without the approval of the appointing authority. The common people can also be arrested in this case only after the approval of the Senior Superintendent of Police. Under this law, there was a previous provision to immediately arrest the person who violated it on the basis of a complaint. The Dalit community was hurt by this decision. According to them, it was an attempt to make the law flexible and it was feared that the incidents of oppression on Dalits would increase. Human rights organizations and many non-BJP parties have also criticized this decision and questioned the motive of the government. Dalit leaders themselves had expressed their objection to the verdict from within BJP itself. Obviously, it was also afraid of his vote politics.

The Central Government has filed a retrial petition in the Supreme Court. But it seems that the government came into action late. Anyway, the Supreme Court has refused to hear the case immediately. The Center has also cleared that there is no intention to remove the provision of reservation for Dalits and minorities. Meanwhile, violence, arson, and demolition took place during clashes in parts of Uttar Pradesh, Gujarat, Punjab, Rajasthan and Madhya Pradesh. Section 144, curfew and Internet services have been blocked. News of four people being killed and dozens injured also came in the media. Several trains coming to Punjab, Odisha, Delhi, Bihar, and Jharkhand were stopped. The calmness of this movement of Dalit organizations has thrown the hands of power politics. This government machinery had no idea that the movement could spread so fast and intensely. Administration and security agencies do not seem to be fully prepared.

It was the effect of the Dalit movement that the central government had approached the Supreme Court for review petitions on SC / ST Torture Prevention Act, meanwhile, the four Dalit MPs of BJP came out in protest. Yashvir Singh from Nagina wrote to Prime Minister Narendra Modi that nothing has happened in the last four years for Dalit community. Ashok Kumar Dohrey, Member of Parliament, Lok Sabha of Etawah also wrote a letter to the Prime Minister accusing the police of torturing after Bharat Bandh.

It is a difficult coincidence that a few days later, on 14th April, the country celebrated the birth anniversary of the Constitution Maker and the great leader of the Dalit consciousness, Bhim Rao Ambedkar. Power politics will sing his glory with fake clips, and on the other hand, the oppressed Dalit people will be scattered here on the streets in the fight for their respect.