By Saurav Kumar in Caste

The vision which is in power at the centre of Indian politics and shares power in more than 20 states in the country, carries a legacy of unleashing discrimination against the Dalit community whom they pragmatically and systematically hate. This vision forms the bedrock on which Rashtriya Swayamsevak Sangh and its political wing Bhartiya Janata Party stand. BJP remains the single political party to have built an unimaginable scathing demonic stature of torturing our Dalit countrymen.

In the heart of Delhi, several instances of death of sewer workers have been reported. “No manual entry into any sewerage system will be permitted. No human contact with sewerage will be allowed without prescribed protective gear.” These directives are a part of an August 14, 2017 order issued by former Delhi Jal Board (DJB) CEO Keshav Chandra — following a spate of deaths of sewage cleaners in Lajpat Nagar. This order remained on paper. According to a fresh report, in the seven years, 31 sewer workers have died in Delhi alone. Out of these seven years, Modi and his government have been in power for four years. Even the government of New Delhi must be held accountable for their silence on this issue. But ideologically RSS-BJP is one such entity who is the most culpable for inaction. 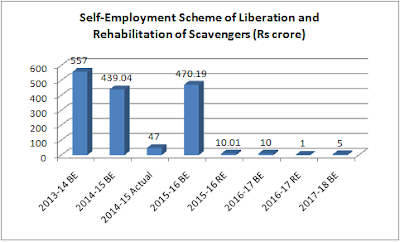 Despite the ban on manual scavenging in India, over 300 cases of deaths due to manual scavenging have been reported from across the country in 2017 alone, according to a reply given by the Ministry of Social Justice and Empowerment to the Lok Sabha in December last year. What is the agenda behind this revelation? The answer lies in statistics of budget allocation in last four years of Modi government.

The worst came up in the 2017-18 budget by reducing 10 crores to a half provision of ₹5 crore.” In the financial year 2018-2019 the budget allocation was ₹20 crore. This raise is just a populist move for sure. Union Minster for Social Justice, Thawar Chand Gehlot passed on the buck blaming state governments saying, “When we seek information, most states say there are no manual scavengers. Till July 2017, 13 states finally admitted to having 13,500 manual scavengers”. State governments are equally responsible for the loss of lives. And I just have three questions for them:

A private contractor after successive incidents in Delhi last year said, “The pay is not enough to hire workers or buy safety gear: How will we hire machines? The government doesn’t conduct an audit”.  This statement clearly proves concern like increasing budget allocation to stop the death of sewer death is mere tokenism and a task undertaken on just paper and not in reality.

In a recent move, Modi government asserted that there was a misuse of Scheduled Castes and Scheduled Tribes Prevention of Atrocities Act. So it went forward filing its review in the Supreme Court. This was aimed at diluting laws which shield the Dalit community of our country, but this was heavily criticized by each section of society. There was an uproar over Dalit rights. Bharat Bandh over this SC/ST Act brought many states to halt. From Gujarat to Bihar, Punjab, Uttar Pradesh, Madhya Pradesh nationwide strike with thousands of protestors expressed deep dissatisfaction against this move of Modi government.

Seeing this anger, the government went on back foot changing its tune blaming opposition parties of instigating violence nationwide and challenged the review decision of apex court but this got exposed when the Supreme questioned double standards of Government. Justice A.K. Goel, who headed the Bench comprising Justice U.U. Lalit said, “The Union itself said there was abuse.” According to NCRB data, between 2010-2016, there was 10% rise in crimes against SCs, STs. A proportion of cases that were pending trial at the end of the year rose from 78% to 91% in cases of Dalits and 83% to 90% in cases of Adivasis. There was also drop in conviction rate from 38% in 2010 to 16% in 2016 for crimes against SCs and 26% in 2010 to 8% in 2016 for crimes against STs. Roughly 10% of cases of crimes against SCs and STs under police investigation are labelled as false. Social boycott, intimidation, death threat and compromise lead to victims changing their stand, and thus factual complaints are labelled as false.

Let us not forget, the ideological foundation of Modi government is based on “Manusmriti”, and “Parasahara Smriti” which ridicule and deny any respect to Dalits in principle and practice. The recent diktat by Prime Minister Narendra Modi to his MPs on spending a night with the Dalit community is a new low in Indian Politics. “Dinner-at-Dalit House Campaign” was condemned openly by BJP Dalit MPs. Dining with Dalits is not the solution to problems which they are surrounded by in their daily lives. It is a political gimmick undertaken by Prime Minister which mocks the dignity of Dalits and is aimed at the upcoming Lok Sabha elections of 2019.