From Kolkata To Kataiya, Moral Policing And Slut Shaming Make Up The New ‘Indian Culture’

By Shahla Khan in Gender-Based Violence, Sexism And Patriarchy, Society 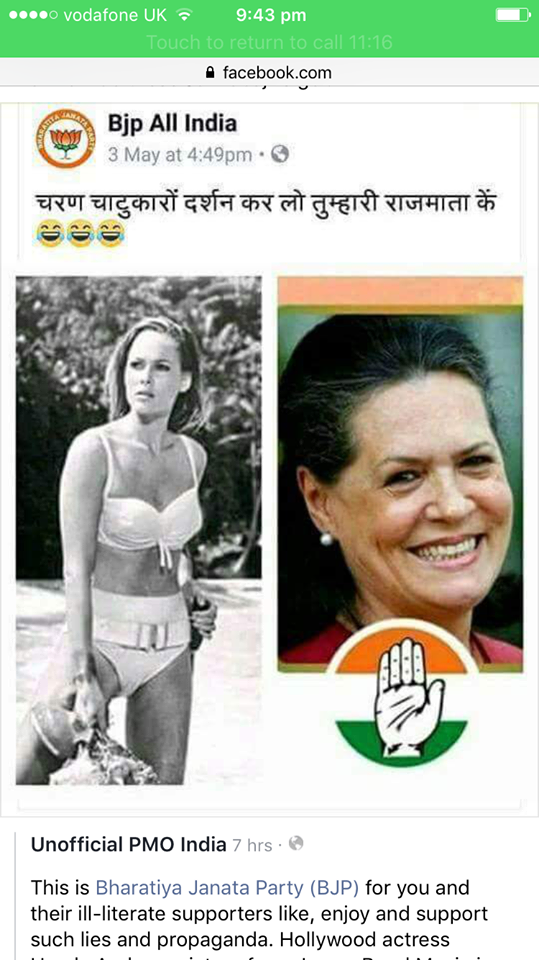 The idea behind sharing this image was to shame Sonia Gandhi for wearing a bikini. How could a senior woman politician in India possibly be in her swimwear, right?

First of all, the woman in the photograph is Ursula Andress, and the still is taken from the James Bond movie “Dr. No”.

Secondly, even if it was Sonia Gandhi, so what? How is wearing a bikini in any way comparable to having rape charges against oneself or being responsible for a genocide of thousands of human lives?

This slut-shaming and moral policing has gone too far.

You may have seen the videos and photographs circulated recently from the Dum Dum Metro station in Kolkata, where a young couple was thrashed by fellow passengers for ‘standing too close’ (whatever that suggests to close-minded people).

The hilarious thing is the reaction of the Metro Railway authorities. Look at this:

So, first, they post this and clarify in capital letters that they are against moral policing. Look at what happened next: 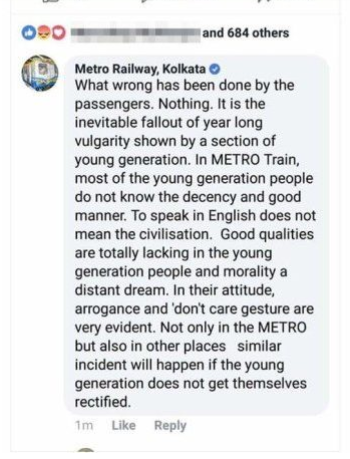 The second image is probably written by some uncle and the message reads more like a lecture to young people on their behaviour and attitude rather than a government-funded public body’s statement regarding a crime that was committed publicly in one of their Metro stations.

We were only getting over this barbarism when a new video appeared.

This is from Kataiya, a village in Bihar where you’ll see a young woman being tied to a pole and being beaten by villagers by the order of the Panchayat.

Whether it is Sonia Gandhi, one of the most powerful women in India or a teenager from a village, has this so-called ‘Indian culture’ spared any woman? Why does the Indian society get a kick out of slut-shaming women so much?

But these people have re-defined ‘Indian culture’. Under the new definition, Indian Culture means the subjugation of women, violence against anyone that disagrees with you and shaming and harassing women for fun and pleasure.

This is new India and this is the new Indian culture – yes, the culture of the same people who once wrote the “Kamasutra”.

I Am Not Your Wife Or Daughter. I Am A Person.

The Unnao Murders: No Country For Dalit Women