Mr Vajubhai Vala, Please Act Like The Karnataka Governor And Not The BJP’s Puppet

By Zia Nomani in Politics

Despite JD(s) and the Congress having a combined majority, you have given the BJP two days of time to prove their strength and form the government because it emerged as the single largest party in the 2018 Karnataka Assembly elections. This is an unconstitutional and biased decision to help the BJP form government by horse-trading MLAs.

The BJP has only 104 seats, falling short by 9 to be able to form government. The only way the BJP can form a government now is either by buying MLAs or splitting the JD(s) and Congress alliance with money and power. It seems you have purposely given time to the BJP so it can buy or influence the Congress/JD(s) MLAs.

I would also like to draw your attention to similar cases in Goa, Manipur and Meghalaya where the Congress was the single largest party but BJP was allowed to form a government with allies without giving time to the Congress to prove their majority. 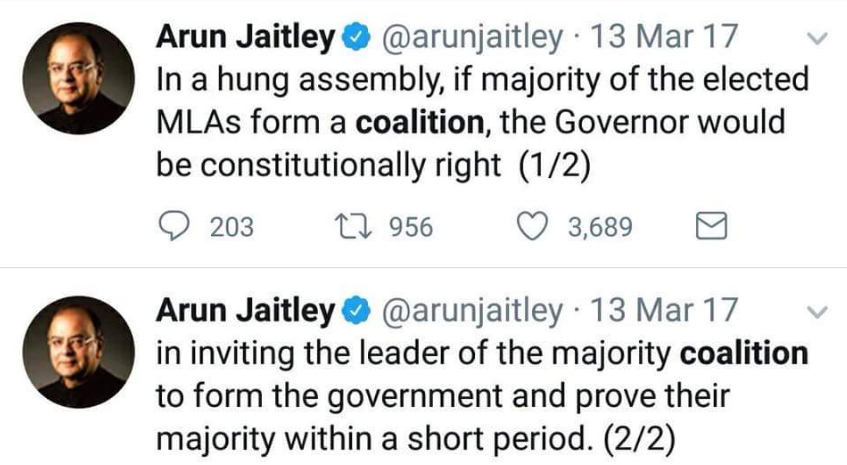 In the case of Goa, a special bench headed by Chief Justice JS Khehar had said in its ruling, “You (Congress) don’t have the numbers and that’s why you didn’t claim to form government… You haven’t demonstrated before the governor that number is in your favour.”

I am sure you are aware of the above instances. I humbly beg your pardon sir, to not act as Amit Shah’s secretary but as the governor of Karnataka. Do not be party to the horse-trading of MLAs.

Sir, I request you to please bear in mind that power is not eternal. Show loyalty to the Constitution and not to BJP or Amit Shah.

Hyderabad Council Polls At A Glance

Farmers’ Protest: When People’s Rights Are Exploited To An Unbearable Extent