BJP Breaks Off Alliance With PDP In Jammu And Kashmir

The unexpected alliance of Peoples Democratic Party (PDP) with the BJP came to an end on June 19, 2018. The BJP ministers had submitted their resignations to the Chief Minister Mehbooba Mufti and she submitted her resignation to the governor N.N. Vohra. 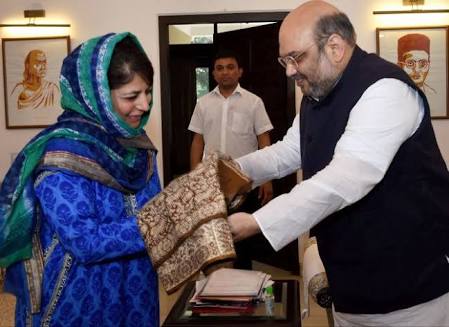 In my opinion, the decision taken by the BJP is absolutely correct because violence is increasing day by day in the Kashmir valley. The stone pelting cases are also increasing. After observing all this, there are no reasons to continue the alliance. BJP said that they broke the alliance because the region could not be developed if it continued to be under Mehbooba Mufti’s rule.

There were also allegations that Panchayat polls elections couldn’t be held because the Chief Minister didn’t want them to happen.

This decision came after the BJP president met with the party’s top leaders in Jammu and Kashmir. The meeting took place in Jammu and Kashmir bhawan. Mufti replied that it was really sad to see BJP disowning their initiatives. It was also reported that BJP is claiming Mehbooba Mufti never allowed them to touch Article 370.

No other party so far has come forward to form the government. Maybe they all want governor’s rule in Jammu and Kashmir so that the situation can be brought under control.

The Centre on Sunday had decided to end the Ramzan ceasefire and resume military operations against terrorists in the valley. It was also reported that the death of Shujaat Bukhari and army jawan Aurangzeb could have also been the reasons behind the ending of the alliance. The leader of the opposition Ghulam Nabi Azad said that instead of killing terrorists, civilians and army men were dying.

We Need To Bring Jammu, Kashmir and Ladakh To The Centre Of The Climate Change Discussion Beyond Political Hue And Cry

Are We Choosing To Ignore The Alarming Mental Health Crisis In Kashmir?