In the first two weeks of May 2018, when most students in institutions of higher education were busy preparing for their semester examinations, students at BITS Pilani were protesting against a sudden and mammoth fee hike. On the evening of May 5, the BITS administration released the fee structure for the new students wishing to join the varsity. The tuition fee was revealed to be ₹1,59,000 per semester.

The next day saw around 3000 students assemble first in front of the iconic Clock Tower in the Pilani campus, and later inside the Central Auditorium demanding the rollback of the proposed fee hike.

Students in BITS Hyderabad and Goa campuses soon joined in and ‘#RollBackBITSPilaniFeeHike’ was soon trending on Twitter India. The Vice-Chancellor, who had been away, returned in a few hours and addressed the students briefly. Dissatisfied with his statements and furious at the lack of action, the students followed the VC to V-FAST where they stayed put for the night despite having their semester examinations to write the next day.

The coming week saw a series of meetings between all the stakeholders in the BITS Family to find a viable solution to the issue. However, even a few closed-door meetings later, there was hardly any light at the end of the tunnel. Given assurance of putting the fee-hike on the hold until an amicable solution was found, students started to leave for home by May 12. Three days later, the students of BITS Pilani gathered in the evening and formed a human chain in shape of the Clock Tower on the campus and officially halted the protests.

However, a few weeks into the summer break, an email addressed to the parents of the enrolled students from the Vice-Chancellor, saw them being addressed as important stakeholders in the matter, but at the same time requested the guardians to ask their wards to refrain from activities that are tantamount to indiscipline.

On June 19, another email talked about the inherent legacy of the BITS institution and its private nature that put a demand of ‘no fee hike’ out of question. In the week after this, on June 25, select student representatives received show cause notices from a committee constituted by the Vice Chancellor, with allegations of instigation and defamation of BITS.

“Until now, we had some amount of trust left in our administration but after the notices, we realised that they completely failed us. We were told in the initial days that a Board of Governors meeting will be called, but even that didn’t happen. With the administration saying that there won’t be any change in the fee structure, the students had resumed the peaceful protests, but only to receive show-cause notices from the administration to suppress their voices,” says Sidhartha Namburi, who has also received a show-cause notice. 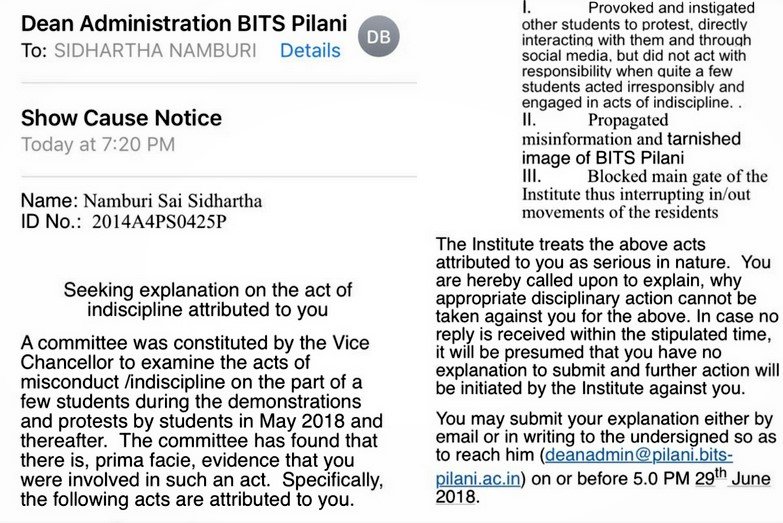 In view of these developments, the students of BITS Pilani are organising multiple nationwide protests on July 1, 2018, in various cities like Chennai, Bengaluru, Hyderabad, Aurangabad, Indore, Lucknow, Jaipur and Rourkela. The protests, according to a Facebook post, will take place at famous locations within these cities, and if people are ready to take the lead then cities can be added to the list. The main venue is in Mumbai outside the Birla house to “send across the clear message that the administration has failed us and now it is time that the chancellor Mr Birla intervenes himself.”

“We want to convey to Mr Kumar Mangalam Birla that as a Chancellor, he needs to intervene and solve the issues of the students. We also want to convey to him that he needs to give as much importance to BITS as the predecessors of his family gave. Only then the name and fame of BITS will remain as it is,” adds Namburi.

At present, the students demand solutions like “One Batch, One Fee” and “Lower Cap of the Fee Hike” to be implemented at the earliest.

It must be noted that Birla Institute of Technology and Science (BITS) is a privately owned but deemed university under Section 3 of the UGC Act 1956. As a private institution of such important stature on the national and international level, these student protests raise some of the most important questions in the context of the privatisation of higher education in India at present. If education is yet another commodity or service at the most, can and should the privately owned educational institutions be guided only by the market forces?