What Has Yogi Adityanath Really Achieved By Shovelling Muck By The Gomti River?

Do you think Yogi Government should take Stringent steps to clean Gomti and other rivers?

The Gomti river, a tributary of the sacred Ganga, spends a considerable time on its 12 KM walk and run in Lucknow, after sprinting about 240 kilometres at other places. On Sunday, June 24, the chief minister of Uttar Pradesh Ajay Singh Bisht (also known as “Yogi” Adityanath) swept the banks and nearby places of Gomati with brooms and removed muck with spades. Indeed a thing to celebrate when such a towering figure and his 7,000—err, I mean—700 followers and friends do something to clean the river which is touted to be more polluted than its big sister, the Ganga, in Benaras.

Also read: The Bitter Reality Of The River That Fulfills 70% Of Delhi’s Water Needs

A lot of coverage was achieved by this event, but maybe for the wrong reasons. The campaign, advertised earlier through newspaper ads and huge banners across Lucknow, claimed that 7,000 people, including students and citizen volunteers, had signed up for the exercise which was to be carried out between 1090 Crossing and Gau Ghat. All the activity was concentrated around the 100-metre stretch at Jhulelal Park, where the CM was supposed to inaugurate the campaign. Forget 7,000, barely 700 showed up for the programme, mainly nagar nigam workers, civil defence personnel, local netas, and BJP supporters. 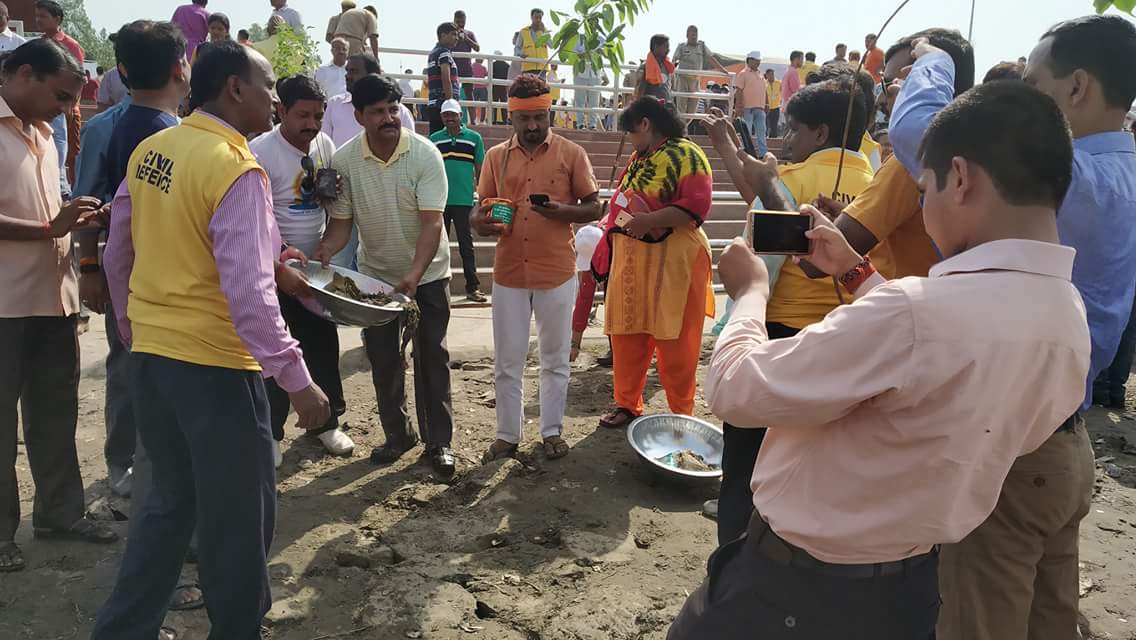 As people squirmed in their plastic seats, trying hard to not get baked in the oven-like saffron tent, the bureaucrats lauded their “utsaah” (excitement) as Yogi reached the adjoining ghat, surrounded by scores of media persons. Several hired safai karmchaaris (cleaning personnel), who began sweeping furiously for the cameras. Ten minutes later, Yogi and most other people left, leaving behind selfie-takers and contractors guarding their untouched cleaning tools.

Gomti Is Now Clean. Or Is It?

Citizens have the power to change things, and the greatest movements have always had huge participation from citizens—if not as leaders, at least as ardent foot soldiers. A closed lake whose aquifers are not polluted can always be cleaned by manual or automatic methods, even by volunteers’ clean-up drives, and regular checks on pollution. A river, however, has a lot of adventure to offer.

In 2001, and I am sure even before, citizens volunteered to clean up the Gomti river and banks on Sundays. Brandless, but with super motivation in their minds, they were ultimately named “Sunday Warriors” by local newspapers.

Also read: Faced With A Dead River For 15 Years, These Women In Tamil Nadu Did The Unthinkable

Originating in my hometown Pilibhit, The Gomti serves as a water source for over 35 lakh people. Here in Lucknow, about 36 city drains pour untreated sewage into the river. No wonder this stretch is the most polluted. Agricultural runoff brings lot of insecticides, pesticides and fertiliser, and its impact can also not be ignored. Gomti receives huge quantities of untreated sewage, industrial effluents, and also street washouts bringing oil, asphalt, sediment and many types of heavy metals.  If the findings of a research article that tested 15 locations are to be believed, then the level of Arsenic toxicity in Gomti in Lucknow exceeds twice the permissible limit set by the WHO. According to the research article, Copper exceeded the permissible limit at two locations, and Cadmium at all 15 locations exceeded the permissible limit by several times. “From industrial effluents to domestic discharge, the river becomes more of a flowing dumping yard,” said the research. Can your brooms and spades clean this mess? Green Gomti by 2017 was a target set by the previous government. What is yours, CM Yogi?

Every city expands, every state develops, but it is high time this development is inclusive. Development should be sustainable, not destructive.

The Sabarmati riverfront has for long been projected as the Gujarat model of development. However after industries and townships have grown, such riverfronts add to the stress on the rivers. It will be fun if Ajay Ji and his spade travel a bit more around the path of Gomti and break down a few illegal constructions and push industry effluents back to their sources. Thanks to him, a few more Indians, and even some formerly clueless Lucknow wallahs now know about Gomati. I will thank him more if the rivers of UP get their dues, and their recharge system are made efficient.

Also read: Faced With A Dead River For 15 Years, These Women In Tamil Nadu Did The Unthinkable

Rivers are not only service providers in terms of water to people, trees, and animals, they exert a huge economic impact on the population. And while Yogi is at it, I would love if he could announce an event where people instead, of dipping in the Gomati on Ekadashi, start taking its water home and bathe in it. Agreed it will be an event of high TRP value. Maybe when people go home, and measure pollutant levels of that water, they will finally realise the amount of care the river needs.

In addition to Lucknow, Lakhimpur Kheri, Sultanpur Kerakat, and Jaunpur are the most prominent of the 15 towns in the river’s catchment basin. It will be fun if the CM visits all of them and makes this much-needed change happen. If Bhagirath brought Ganga to this planet, why not a “Yogi” get the wells cleaned and help the recharge of this important river?