Did The Governor Misuse His Powers While Forming The Government In Karnataka?

By Transparent India in Politics

On May 15, 2018, the results for the Karnataka state assembly election were declared on 222 seats. The BJP secured 104 seats, Congress got 78 seats, JDS got 38 seats and the others secured the remaining two seats. For any political party to form the government, they ought to cross the majority-seat mark, which in this case, was 112 seats. After the results were declared, it was quite clear that none of the political parties enjoyed the majority in the assembly.

That day, in the evening, the Congress came to know of the situation. It rushed to JD(S) – and in no time, both parties stitched an alliance. This arrangement would have secured them 116 seats (78+38), which was above the majority mark of 112 seats. However, the BJP was still the single largest political party with 104 seats.

People were outraged, because according to the election results, it was quite clear that BJP did not enjoy a majority. Furthermore, even if it roped in the other two seats in the house, they wouldn’t be able to enjoy the majority. So how would they prove their majority? This was only possible if the BJP indulged in horse-trading.

Now, there is no clear instruction in the Constitution as to which party the governor should invite first (in the case of a hung assembly). So it completely depends on the governor’s discretion. 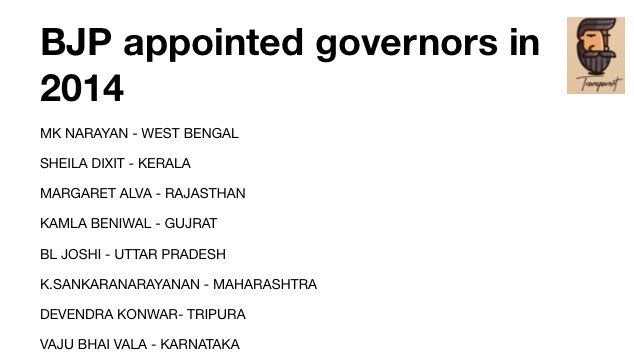 So, if all these reports are taken into account, it would seem that the BJP has been given more privilege than the others. One of the possible reasons behind this may be that in 2014, when BJP came into power, it changed the governors of most of the states, appointing their own trusted personnel as the governors. Hence, their reliability can be questionable in such situations.

According to a report published on May 15, Vajubhai Vala was number two in Modi’s Gujarat Cabinet for almost a decade. Nevertheless, Vajubhai Vala has also been a member of RSS. This may explain why he invited the BJP first to form the government, and also gave them 15 days to prove its majority in the house – thereby working like a party puppet.

On the other hand, the makers of our Constitution have given a respectable amount of power to the post of the governor. Back then, it was believed that eminent personalities would be elected for this post, preferably non-political persons who would respect the principles of democracy and the Indian Constitution.

Compare these considerations to an article on The Wire dated March 23, 2017 – “From Goa to Manipur, Modi’s Governors Have Sabotaged Democracy.”

The governor’s post is also being used unconstitutionally – often to pressurise the elected government in a state/union territory. For instance, despite winning 67 seats in the last Delhi assembly election, the AAP still faces issues while taking independent decisions. Furthermore, there is the certain involvement of the Centre – and of course, the Central Bureau of Investigation.

In 2017, P Chidambaram, a celebrated Congressman, tweeted the following after the Goa and Manipur state elections – “A party that comes second has no right to form the Government. BJP stealing elections in Goa and Manipur.”  However, if look into the 2018 Karnataka election keeping this tweet in mind, then perhaps it’s the Congress that has no right to form the government here, as it came second.

On the other hand, the BJP had no ally in Karnataka. This takes us to the question – how would BJP have secured the remaining MLAs to prove its majority? The predictable conclusion is that the BJP would have probably resorted to undemocratic means to ensure this. They could have ensured this either by threatening JD(S) and Congress MLAs or by horse-trading.

Meanwhile, Congress collected all its MLAs and shifted them to a resort so that they would not be contacted by the BJP members.

Kumaraswamy also alleged that the BJP offered a whopping ₹100 crore to JD(S) MLAs and other lucrative offers. On May 17, 2018, the governor invited Yeddyurappa to take oath as the Karnataka CM, while also giving them 15 days to prove its majority in the house. It was clear that the governor actually gave time to BJP to negotiate with the Congressmen and JD(S).

Due to these unfavourable conditions, the Congress knocked the doors of the Judiciary. They went to the Supreme Court stating that they were being suppressed by the governor and the BJP. As a result, the SC ordered that the floor test wouldn’t be held after 15 days, but on May 19 at 4 PM. This was done to reduce the chances of horse-trading.

The political situation took a dramatic turn, when the governor’s first choice, CM Yeddyurappa, resigned from his post. After delivering the speech in the Lower House before the floor tesr, Yeddyurappa went to Vajubhai Vala to submit his resignation. His resignation paved the way for the formation of the government led by JD(S) state chief HD Kumaraswamy, who is backed by Congress.

However, the ex-CM is of the view that this alliance won’t even last for three months.