‘I Write, Draw And Paint About The Women I’ll Never Be With’

By The YP Foundation in Cake, Gender and Sexuality, LGBTQ, My Story, Staff Picks

My partner of seven years (husband of five months) introduced me to this fantastic show on Cartoon Network called “Adventure Time”. The show follows the story of a young boy named Finn and his dog/adopted brother, Jake, in the magical land of Oo. It’s a pretty zany show, but I love it – not only because of its deceptively complex story-line, but also because it features some fantastic characters who are queer!

I found myself becoming insanely obsessed with two of these characters – Marceline the Vampire Queen and her on-and-off partner, Princess Bubblegum. I had a poster of them in my room, and my phone wallpaper was a picture of the two of them kissing. I even drew them kissing in my sketchbook!

I never really questioned my obsession with them (which incidentally, isn’t even close to ending yet) until quite recently. The reason why I took this thought seriously in the first place was because over the past two years or so, I finally consolidated certain feelings I had been having towards women for a long time. Having been with a steady male partner since high school, I couldn’t entirely get myself to acknowledge that I was anything more than ‘bi-curious’ – that I’d kiss girls, but only when drunk, or gush over my various ‘girl crushes’ who weren’t really crushes at all, apparently. I barely thought twice about how in every sex scene I had seen in my life – including all the porn that I had ever watched – I only ever got aroused by watching the women. I even ignored the fact that a whole bunch of drawings I made and stories I had thought up typically featured women who were together. 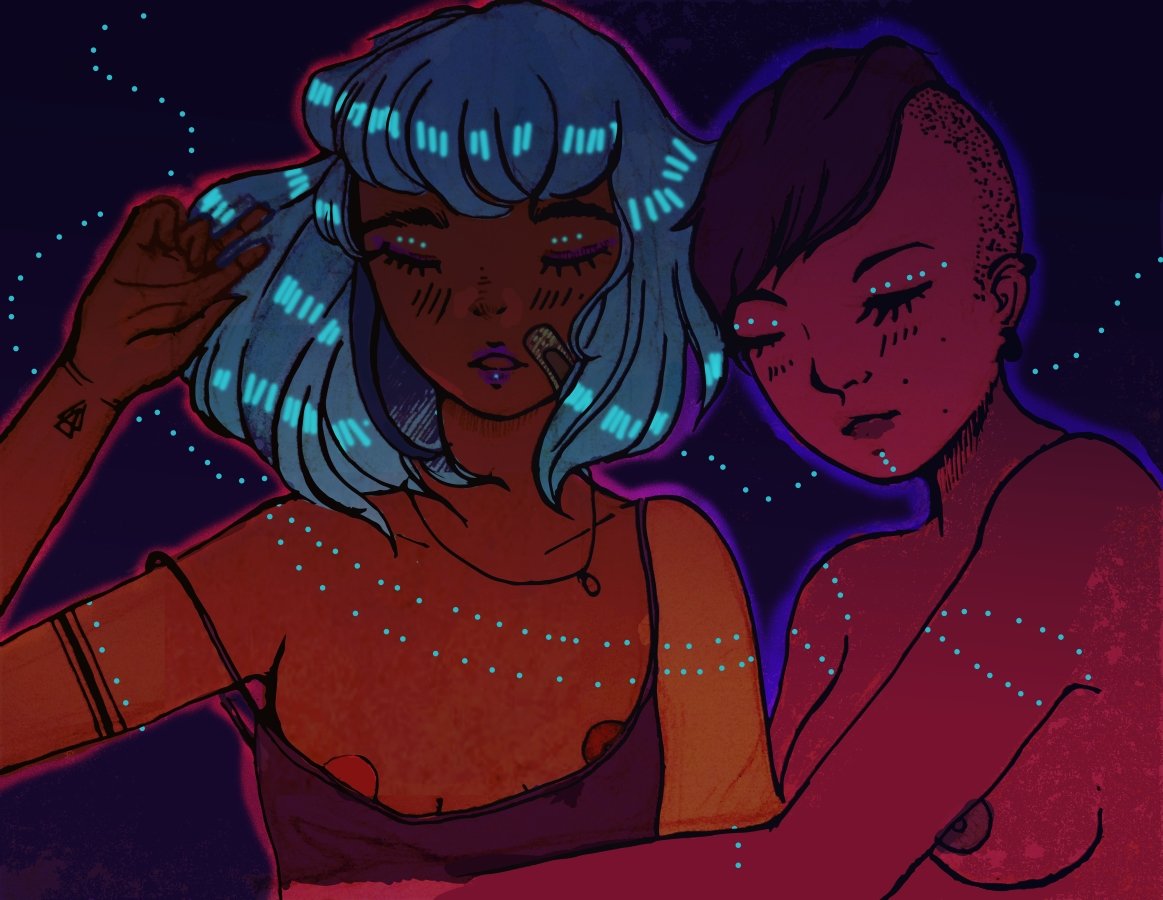 But, as I continued creating art and writing stories featuring women, I slowly started to introspect. I realised how so many of the ideas of love and romance I had formed in my mind were just that – only ideas. They had been planted there by the overwhelmingly heteronormative ideals and expectations perpetuated by the ‘rom-coms’ and ‘chick-lit’ novels I obsessively consumed as a teenager. I realised that I wasn’t so much exclusively attracted to men as I was to the idea of being feminine. Since I was always nuts about all things associated with the performative aspects of femininity (when it came to love), I enacted the girls I read about in trashy Meg Cabot novels. Men were merely instrumental in my assertion of my femininity, and not in defining my sexuality.

Opening myself to this realisation changed my perception of myself. Though I understood myself better, I felt vulnerable to a whole new world of judgement from people. Since I had been with a steady male partner for a really long time, and my gender expression is feminine, people didn’t take me seriously when I came out. Emotions I developed towards a female friend were perceived to be my experiments with my sexuality, or as efforts to make myself seem more ‘interesting’ or ‘sexy’.  When I shared how I felt about this friend, some of my friends responded by saying that everyone was bisexual to some extent. Others responded by saying things like “You’re bisexual? You? Really? That’s great!”

Clearly queer people looked and acted in specific ways – and I, somehow, hadn’t gotten the memo.

People’s reactions and my awareness of the challenges and difficulties that queer people face caused me to hesitate to come to terms with my sexuality and identify as queer. Yet, I couldn’t deny how I felt in my heart – identifying as straight felt wrong. At the same time, I had to find a way to express these emotions and desires, which were actively being shut down or sidelined by people around me or by the voices in my head. Moreover, I had to learn how to do this without hurting my partner or threatening the relationship we had built together.

So, I channeled it into the very thing that helped me realise that I wasn’t straight – into art and writing. Writing or drawing about queer relationships allows me to imagine and express what I feel it would be like to be with another woman, or with someone who doesn’t fall into the binary. It has not only helped me in expressing deeper aspects of my identity, but has also allowed me to give myself the acceptance and validation I expect others to give me. It helps me acknowledge that my sexual and romantic desires that aren’t heterosexual are legitimate, even though my partner is a man.

Reconciling and expressing these emotions and aspects of my identity is a process. As someone who doesn’t feel the social ramifications of being queer on account of being a cisgender woman in a heteronormative relationship, I hesitate to take up the space I feel belongs to those whose lives are more significantly impacted by their sexual orientation and gender identity. Since my partner and parents have been relatively supportive of my identity, violence from family isn’t a threat for me either.

Balancing my privilege with the legitimacy of my own identity and emotions has been challenging, and it pushes me into a constant state of expressing myself and holding back. I’m still learning about how I can hit the sweet spot between taking up space that isn’t mine, and allowing myself to see myself as a legitimately queer being. Until I can work this out, making art for the purpose of catharsis and self-expression will have to do.

Lover of all things sparkly and fluffy, the author feels ridiculously happy in a tiara, and spends far to much time thinking about what she’ll wear. She is as indecisive as the Delhi weather in late July, and is in the constant lookout for boxes to fit into – for now, Cisgender-Panromantic-Demisexual-Libran-Unicorn sounds great, but she may change her mind.

In celebration of Pride Month, The YP Foundation is running an online campaign to spark conversations around issues specific to queer youth and their engagement in queer politics, through narrative pieces, articles, essays, comic strips, artworks, and personal interviews. Through these, the campaign seeks to explore the importance of the queer movement in India and the intricacies of queer organising. it also looks at the different ways in which the queer movement in India is forging alliances with other movements, through the active engagement and involvement of young queer people. This campaign is a part of a larger international campaign hosted by CHOICE for Youth and Sexuality.

To submit your stories, poems, articles and artwork, send them to info@theypfoundation.org by June 20, 2018.