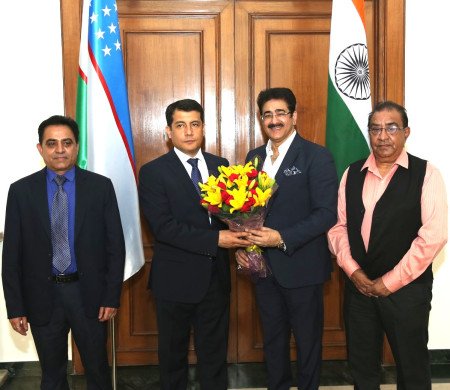 New Delhi: A new committee under the name and banner of Indo Uzbekistan Film And Cultural Forum is formed to develop and promote relation between two countries. The Ambassador of Uzbekistan to India H.E. Farhod Arzieve will formally inaugurate this association in the month of June, 2018 as suggested by the members of the Chamber.
“Many people have not noticed that both our countries are very similar in history and culture. We share the same values. We, in Uzbekistan, honor the code of hospitality just like India does. People in Uzbekistan love Indian films and music. Raj Kapoor, Shah Rukh Khan and Hema Malini are all famous names there!” said Farhod Arziev Ambassador of Uzbekistan to India on the formation of new committee in ICMEI.
“ It is nice to learn that Lal Bahadur Shastri Centre for Indian Culture, was established in Tashkent in 1995 and has been a household name in Uzbekistan for its cultural activities,” informed Sandeep Marwah President AAFT.
Three Uzbek educational institutions, nationwide, promote studies of Hindi language, from primary to post-graduate level. Uzbek Radio completed 50 years of Hindi broadcasting in 2012.Uzbek TV channels regularly show Indian films and serials.
Renowned film and television personality Sandeep Marwah who is also the President Asian Education Group has been nominated as the Chair of the organization and members offered Patronship of the forum to the Ambassador of Uzbekistan which he accepted whole heartedly. The formal inauguration take place in few days.