By Yasmin Soni in Culture-Vulture

Recently a video has gone viral on all platforms of social media. At the first look, it seems like an ordinary Indian overenthusiastic mama/chacha (can’t imagine a father, because obviously, Indian society can’t see a bride/groom’s father so happy) dancing at their niece/nephew’s wedding. In a couple of hours, it got humongous likes, tweets, retweets, dancing uncle was applauded and welcomed by the netizens. This uncle has got some killer moves and a devil-may-care attitude.

Sanjeev Srivastav, fondly referred as “Dancing Uncle” is a resident of Madhya Pradesh and a professor in the electronics department at the Bhabha Engineering Research Institute, in Bhopal. His video received loads of appreciation from celebrities and to top it up, he has been appointed as brand ambassador of Vidisha Municipal Corporation. It has been reported that he is fond of dancing and is a big fan of Govinda, he had danced in many of his college fests, but what’s so special about this video that had made dancing uncle a talk of every tabloid?

Scientists have developed a mathematical model for how things go viral on social media. For a video to go viral, it needs to have a combined effect on many people. If friends start sharing your video, it might explode and spread exponentially. Once it catches attention, then people, out of FOMO (fear of missing out), start sharing and discussing it. There might be many reasons for an overwhelming attention to our dancing uncle, One, the tune that he is dancing to is very catchy and that must have grabbed the attention of the listener. Secondly, the uncle’s attitude is lit AF, its literally savage, he seems like my inner self who wants to give zero fucks to this world and I guess that hits the audience. His moves are killer and his passion for dance is visible. He is good at what he does, unlike Dhinchak Pooja who earned fame by defaming herself. Third, he is that uncle, who most middle-aged Indian men can identify with. And yeah hail all Govinda fans.

Being viral gives you a lot of worldwide attention, some people can make their lives and living out of it, whereas some just can not handle it and detract themselves. Hope our dancing uncle could make it big. 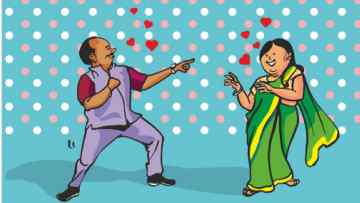