Can BJP’s Win In Tripura Pave A Way For Their Victory In 2019 Elections?

By priya saini in Latest

The BJP showed its remarkable position in Tripura by winning the same vote share as CPI (M), and it has obtained a single majority for the first time. There were a total of 60 seats, and elections were held for 59 seats out of 60. BJP’s had a historic win with 35 seats, CPI (M) with 16 and IPFT got eight seats. 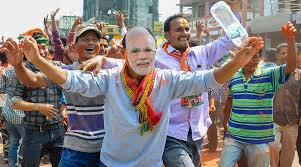 The BJP and IPFT were in alliance in Tripura, but BJP has again proved its victory and now it is in power in 20 states, perhaps all set to oust Congress from the states they are currently ruling. And this time in Tripura BJP has ended the CPI (M) rule; the party was in power for 25 years. In spite of CPI (M)’s leadership, BJP has gone from no one to number 1 in Tripura.

Communist Party of India (M) was also wiped out from the state because of the anti-Incumbency factor. Amit Shah also said that victory after victory is a positive sign for 2019 Lok Sabha elections. He has also said that Tripura has proved that left parties are not right for any state of India. Alliance of BJP and IPFT has played a very important role in Tripura elections, and it acted as a game changer. The results of Tripura could be an indication for the 2019 Lok Sabha elections as well.