Why I Started A Campaign To Spread Awareness About Animal Cruelty

By Ankit Puri in Animal Rights

What would you do if you saw a person physically abusing a child? Would you raise your voice? Or would you walk away?. If you believe in the idea of rights, then you would speak up against the act of injustice and cruelty, wouldn’t you? Then why do we become so ignorant when the same plea or request for justice comes from a non-human being? Why do we deprive animals of their fundamental rights?

Voiceless India is a campaign that I started in 2016 to raise a voice for the Voiceless and work for the environment! When I was in Class 9, I began volunteering at an animal shelter in Delhi, called Friendicoes, with the idea of just utilising my time to help the helpless animals. My time at Friendicoes opened me to the brutalities that animals were facing on a daily basis, and just some of them, who were fortunate, made it to the shelter. A shelter is no place for a healthy animal, but unfortunately we leave no choice for them. On every Saturday or Sunday, I used to visit Friendicoes to take the dogs for a walk. It was disheartening to see that dogs who would just shower me with love and affection on my weekly visits, had been abandoned or ill-treated by someone somewhere. Some were perfectly healthy but no longer wanted by their parents, while many were survivors of horrific acts of brutality. Keeping myself in their place, I used to just be in a state of disbelief as to how they could still be so spirited and continue to love humans.

Later, as I continued volunteering at Friendicoes, I began to hear, daily, about the culling of stray dogs in the state of Kerala calling the dogs a ‘menace’. In the articles that spoke against the dogs, the writers mentioned ‘individual’ instances of dog bites while completely ignoring the thousands of dogs who were abused or killed by humans. I even saw a video of teenage children tying firecrackers to a dog’s tail while the dog wagged his tail, unaware of the consequences. However, I never saw an article of that particular news ever in any newspaper (at least the national ones). This was when I initiated an online petition on change.org addressed to Kerala authorities and the central government to ban the culling of stray dogs in the state of Kerala. In a matter of no time, I saw several petitions on the same topic sprout onto the web demanding rights for these non-human beings. It really struck me hard that how can a ‘government’ of a state that claims the highest literacy rate in India is so ignorant of solutions like sterilisation, to control the dog population.

Within a few months, I organised a cleanliness drive in Gejha Village, Noida, along with an enthusiastic group of friends from my school. The drive saw a participation of more than 180 students from schools across Delhi NCR including Genesis Global, Step By Step, Delhi Public School Ghaziabad and Noida, and Dr Ruhi’s Foundation. I was overwhelmed by the response and was grateful to my parents, relatives and friends for funding the drive and supporting me. After the cleanliness drive, many of my friends hopped in the Voiceless India roller-coaster, and we continued to organize Fundraisers for Friendicoes, spread awareness in my school on World Animal Day, wrote letters to the Prime Minister including an open letter that was published in the School Live magazine and many more initiatives including the Voiceless India Workshops.

The Voiceless India Workshops are a medium to spread awareness among the school-going youth and are an amalgamation of various animal cruelty issues such as animals in entertainment, stray animals, abandoned animals, animal shelters, animal testing and veganism (which we introduced recently). We have conducted these workshops at several schools to sensitise the children and make them aware of issues which otherwise they may never come across. We try to make them aware of the sentence of a chicken on their plates, the motherly love of a dairy cow who’s child is torn away from her at the time of birth if he is ‘unfortunately’ male, the agony of a rabbit who has never been let outside the box-like cage of a laboratory and is forced to feel burning sensations when chemicals are poured on him, or the struggle of a dog who battles on the streets each day just to survive another.

As we started with the workshops, it used to be challenging to get permission to conduct them at schools, but with consistent efforts, we are overjoyed that schools have become much more open to the changing surroundings and feel the need for children to be sensitive toward all sentient beings, whether human or not. It is important for sensitivity to be inculcated in children from a very tender age, so they are moulded into responsible, caring and compassionate human beings. 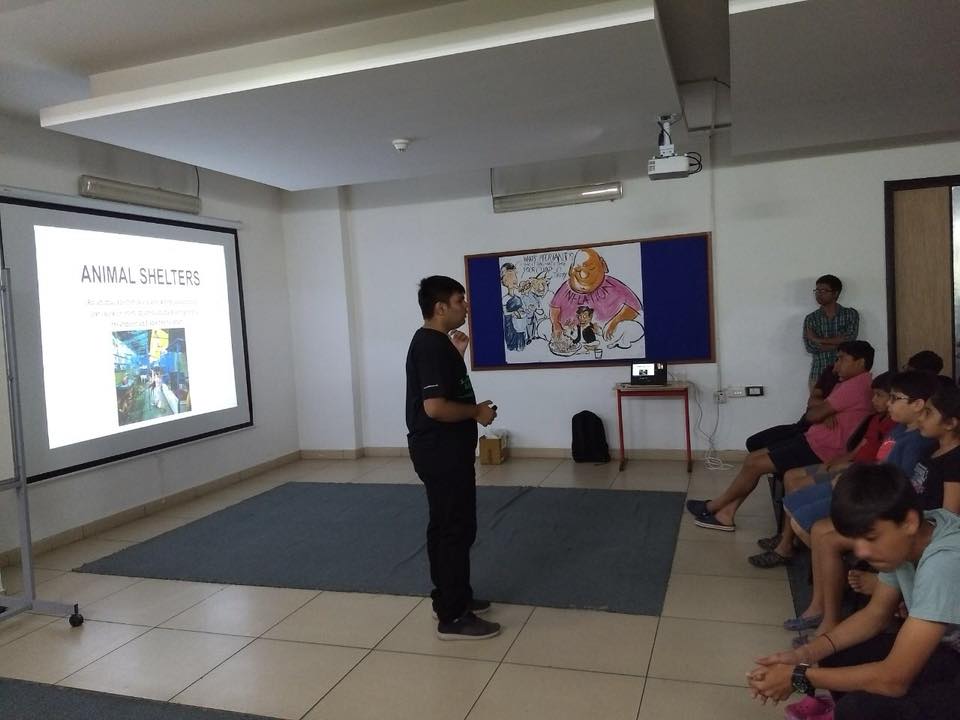 Later in the founding year of Voiceless India, we organised a plantation drive at an animal shelter in Noida to plant a few trees for the animals to take shade during the peak summers of North India. With the support of 40 or so volunteers, we were able to plant around 100 saplings of several varieties, that we had procured from WWF India, which grew up to become tall trees.

After a successful finish to the plantation, we endeavoured to organise a Workshop Month at an underprivileged school in Noida called Diamond Valley, which provided education to children of Gejha Village. During the Workshop Month, we decided to do workshops on every Saturday of the month on two topics – animal welfare and environmental sustainability. During the workshops, the children learnt about the journey of a packet of chips from the manufacturer to the garbage dump, we focused on the importance of recycling, reducing, reusing, refusing and re-purposing, and conducted various activities such as recycling old tyres to make seats after painting them etc. 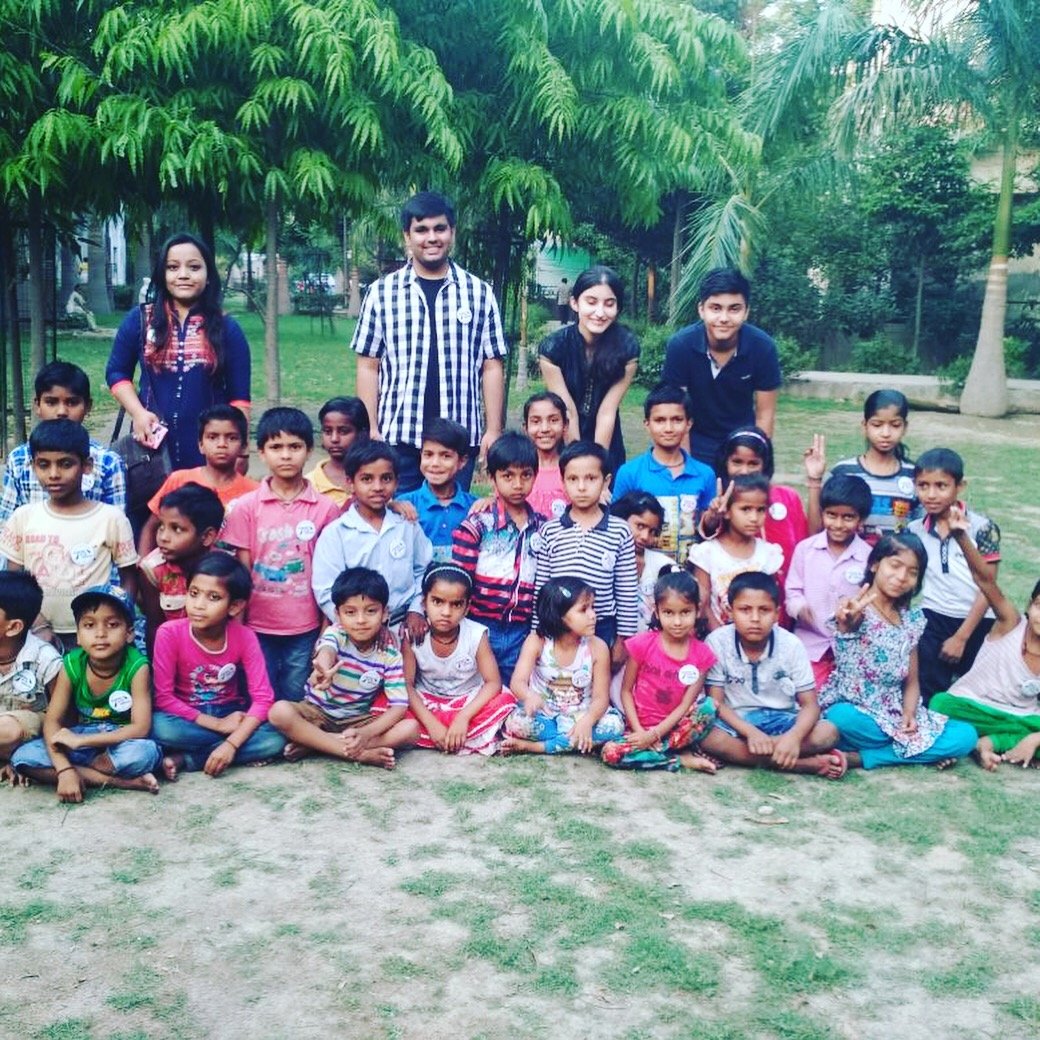 Following the Workshop Month, we decided to organize a few sterilisation drives in Noida to control the dog population so that less and fewer puppies have to die under cars or fewer dogs have to famish to death. With the help of Friendicoes, we were successful in sterilising 43 dogs and strive to collect more funds for continuing it.

While browsing through social media, I came across an article about a few people who had begun a fairly unique initiative, which was to collar stray dogs with reflective collars. These would glow when a car would flash its headlights on them enabling the driver to see the dog during night time. I decided that we should also conduct a similar reflective collaring drive in Noida which we began in March this year (2018) and have been able to collar approximately 40 dogs in these months across Noida and Ghaziabad.

Generally, we do not realize that our actions at each moment of our lives, whether it is consuming a coffee with milk in it, wearing a leather coat, housing a pair of birds in a cage or wearing a woven sweater, each has an impact on non-human animals that are beyond our realisation.

A glass of milk might seem like a non-violent or cruelty-free drink. However, it is not. For cows to produce that milk, they are forcefully impregnated every year; their calf is torn away from them so that they don’t drink up the milk which was solely meant for the calf, just so that we can steal it away from them. When the cows are no longer able to bear the physical and emotional trauma of being abused every year and are unable to produce adequate quantities of milk as a consequence, they are sent to the leather tanneries for being skinned, sometimes skinned alive, for our ‘pure’ leather jackets. The pain of your skin being pulled out of your body is unimaginable. The pain of seeing your own kind being killed right in front of you and you standing in their blood is miserable. The pain of helplessness when your friend is being killed alive is even relentless, and finally, the thought of your own death is terrifying. The cows who could have lived with their calves for around 30 years naturally are killed before their tenth birthday. Those who are not sent to the leather tanneries for their brutal deaths are abandoned on the road where they meet with accidents or starve to death.

Animals do have a language, but we are incapable of understanding it, they do try to express their pain, but we are uninterested in listening to them, they do cry for help, but we disregard their cries, and yet we call ourselves human? I think it is time; we question what being human really means. I, personally, believe strongly that humanity does not give us a sense of superiority, rather it gives us a responsibility.

Just while I work on this write-up, I am on the last chapter of a book that I am reading called- “A Dog’s Purpose”, that gives you an insight into the pure and uninhibited emotions of a dog, who is reincarnated into a variety of lives, just to find the sole purpose of his life, which is…..well, I wouldn’t spoil the suspense and would recommend it.

It is not a bad idea to grow your knowledge through the plethora of online content available on veganism. There are several short documentaries on YouTube that will give you an insight into the animal industries, and you might want to know what REALLY happens!