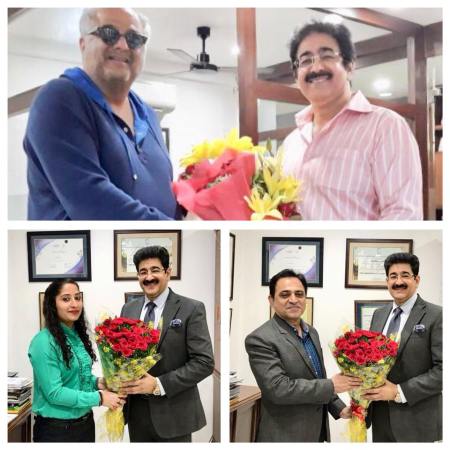 Noida: Renowned Film Maker Boney Kapoor specially visited Noida Film City to congratulate Sandeep Marwah President of Asian Academy of Film And Television on the completion of 25 years of education.
“What a remarkable success of Sandeep Marwah, when all the original plot holders have disappeared from the scene, Sandeep Marwah established the biggest film academy of the country and now one of the best in the world,” said Boney Kapoor presenting bouquet to Marwah.
“I am thankful to the whole film, television and media fraternity especially Boney Kapoor who has gone out of way to support the institution by sharing his vast experience not only to the organization in the capacity of Board of Director but to the students also,’ said Sandeep Marwah President Asian Academy of Film And Television.
Boney Kapoor met all the senior staff members and the workers of Marwah Studios and encouraged them to put their best in making AAFT as the biggest and the best film school of the globe.

Pure Vera CBD Gummies Review: How To Get Benefits?