Postcard ‘News’: A Mega Factory Of Fake News That Continues To Spew Venom

By AltNews in Media, Staff Picks

Postcard News, synonymous with misinformation in the garb of news, continues to post with impunity content which is communal in nature, provocative in tone and mostly untrue. In 2017, Alt News had chronicled numerous instances of fake news posted on this website. The fact that Postcard News has been exposed repeatedly seems to have made no dent in its penchant for fake news. Here are some more instances wherein Postcard News has resorted to misinformation.

In March 2018 in the run-up to the Karnataka election, Postcard News ‘reported’ that a Jain monk had been assaulted by Muslim youth in Karnataka. The Karnataka govt was the target as it was alleged that there is no safety in the state. 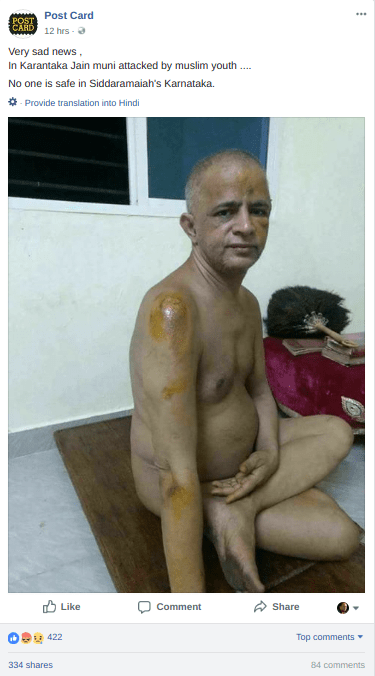 Not only was this information patently false and malicious, disseminated with the objective of inciting hatred but this misadventure landed Mahesh Vikram Hegde in prison. The Jain monk was NOT attacked by members of the Muslim community but had in fact met with an accident due to which he had sustained injuries.

2. Rumour mongering over the death of Paresh Mesta in Karnataka

The body of 23-year old Paresh Mesta was found floating on a lake after the flames of communalism singed Uttara Kanada district of Karnataka in January 2018. Mesta’s death was communalised – it was alleged that he was tortured and mutilated by ‘jihadis’. Postcard News was among those who fanned the fire, ‘reporting’ gory details of Mesta’s torture. 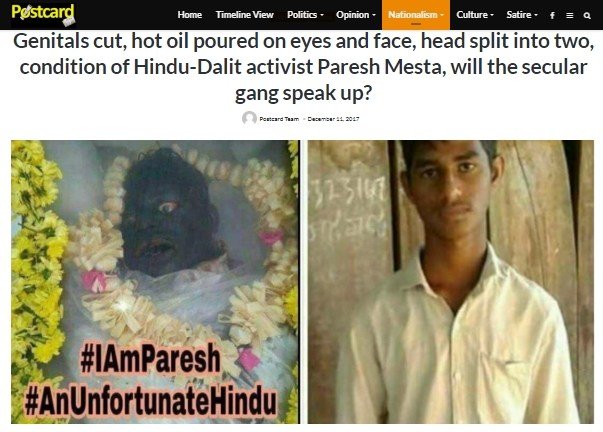 This report was a malicious concoction. This was confirmed by the Department of Forensic Medicine, Manipal which conducted the post-mortem and released a document which gave a point-by-point rebuttal of each of the allegations of torture and mutilation of Paresh Mesta.

In June 2018, Postcard News published an article in which it claimed that former President Pranab Mukherjee had written in his book that Sonia Gandhi took umbrage over his words praising Prime Minister Narendra Modi. Postcard News reproduced an ‘extract’ from the book which said, “After PM Modi completed one year of his term in office, I praised him for the work done so far, on which Sonia Gandhi took umbrage and became angry. Once, while coming out after addressing the parliament, I happened to come face to face with her. She was accompanied by Gulam Nabi Azad and Mani Shanker Aiyer, who greeted me but Sonia kept waiting for me to greet her first. She forgot that the First Citizen of the country was in front of her. She had to acknowledge the President of the country and not Pranab Mukherjee. This greatly pained me from inside, that Sonia is so used to subservience.” 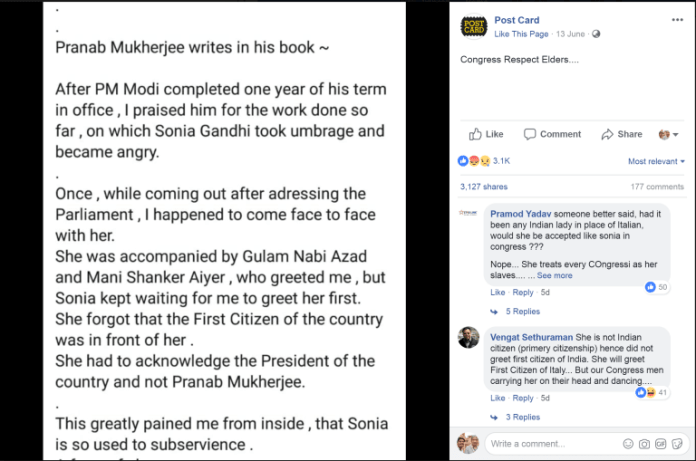 Alt News reached out to former President Mukherjee’s office to check if this was an excerpt from his books. His office stated, “The book ends when he became the President. Covers the period between 2004-2012. So where does the question of something in May 2015 arise?” In another article, it said that Mukherjee had claimed that Sonia Gandhi hates Hindus. This too turned out to be false.

“MASSIVE EXPOSE! Karnataka minister M B Patil’s letter to Sonia Gandhi reveals that Global Christian Council and World Islamic organisation masterminded the division of Lingayats in Karnataka!” The website circulated a letter which it claims was written by M. B. Patil, President of Bijapur Lingayat Association, to Sonia Gandhi. This was also tweeted by Mahesh Vikram Hegde. 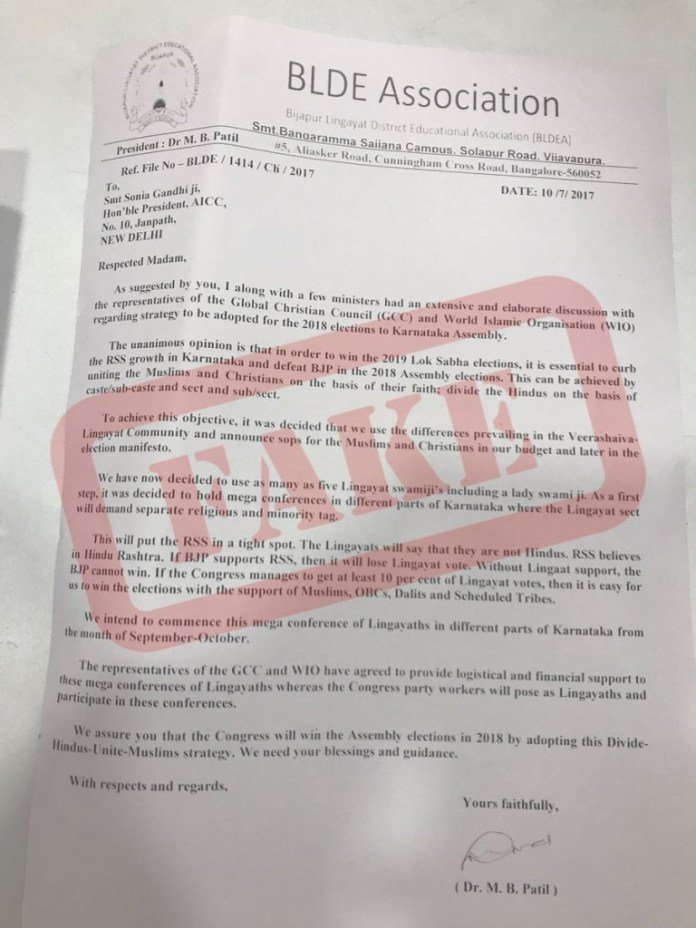 As expected, this letter turned out to be a fabrication. Not only were the language and contents of the letter a dead giveaway, a quick Google search revealed that ‘Global Christian Council’ and ‘World Islamic Organisation’ do not exist. Alt News also spoke to M B Patil who rubbished this letter and said he will file for defamation. Following Alt News’ expose, the article and Mahesh Hegde’s tweet disappeared from the internet.

“Massive controversy breaks out as Social Science textbook in Karnataka includes chapters on How to Islamize country, how to spread Christianity and force kids to visit Mosques and Churches!” screamed the headline of a Postcard News article of June 2018. The article explained that the chapter has been included “on orders of Congress high command which is nothing but a mouthpiece of ROME and VATICAN” and further added that “Sonia Gandhi is spearheading a campaign to turn the country into Christian dominated Nation by helping missionaries and Churches in mass conversions.” 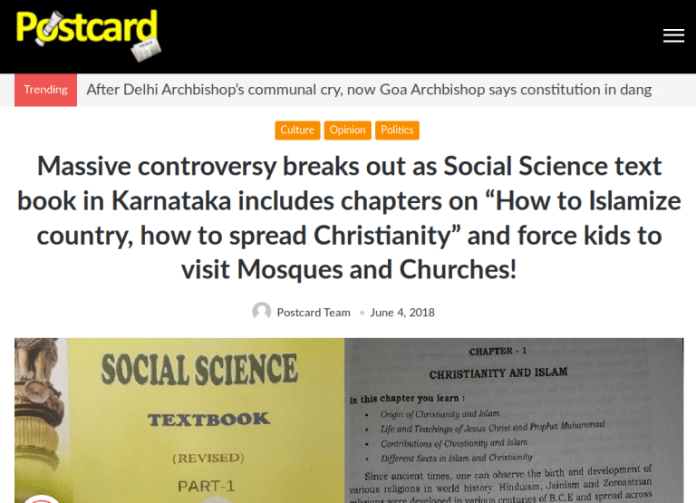 This claim too was false. Alt News has reported how social science textbooks of Karnataka include chapters not only on Islam and Christianity but also about the various strands of Hinduism. Moreover, the chapter on Christianity and Islam had been prescribed under the syllabus for social science by the National Curriculum Framework, 2005. 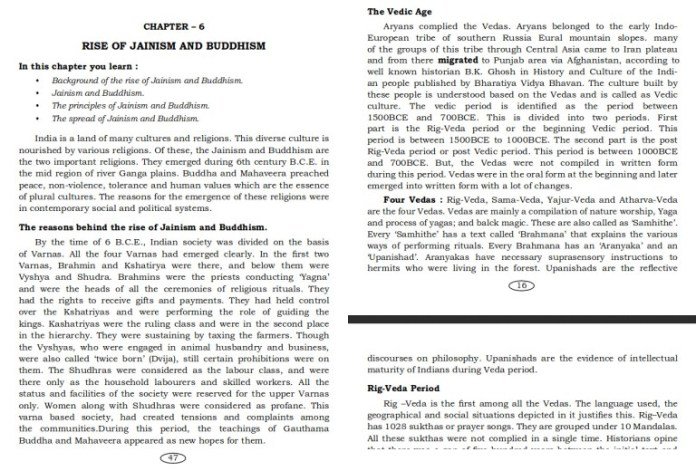 6. Fake quotes from Farhan Akhtar and A R Rahman

When communal violence broke out in Kasganj, U.P in January 2018, a quote ascribed to actor Farhan Akhtar began circulating on social media. According to the quotation, the actor justified the death of those who were killed in the communal violence that erupted in Kasganj on Republic day. Postcard News was among those which carried this quote. 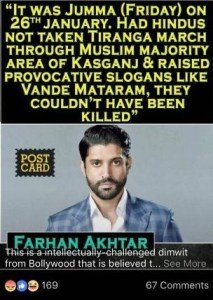 Needless to say, this quote turned out to be fake. Akhtar came out with a clarification, tweeting that he had never said what is being attributed to him by nefarious elements on social media and urged his fans and followers to be cautious about what and what not to believe on social media.

Postcard News had also posted a quotation attributed to musician and composer A R Rahman, according to which Rahman welcomed the government’s initiative to curb cattle slaughter and said that “Killing cow hurts the sentiments of billions of Hindus.” 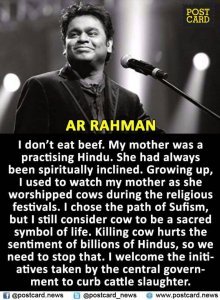 This lie was busted by SMHoaxSlayer in an article which clarified that Rahman had not said these words.

In June 2017 Postcard News posted a picture of a bloodied man claiming him to be a victim of lathi-charge by West Bengal (WB) Police against supporters of Gorkha Janmukti Morcha (GFM) who were agitating against the govt’s diktat that Bengali be taught compulsorily till Class 10 in schools across the state. 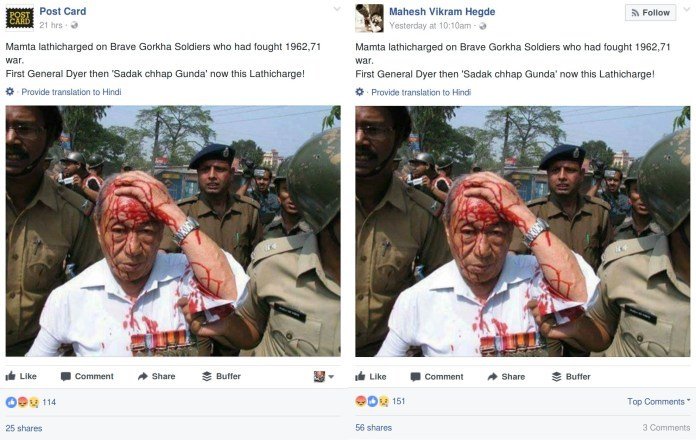 The picture is actually that of Col DK Rai, who commanded the 6/8 Gorkha Rifles. Only, Col Rai passed away on March 29, 2017. He was attacked by the police during the Gorkhaland protest in 2008 and Buddhadeb Bhattacharjee, the veteran CPI(M) leader, was the chief minister of West Bengal at that point of time.

“Rajdeep Sardesai’s son will lose his medical seat for getting admission by saying that his parents were NRIs?” asked the headline of an article on Postcard News in February 2018. The article was based entirely on Prashant Patel Umrao’s unsubstantiated allegation that journalist Rajdeep Sardesai’s son had availed admission under the NRI quote at Manipal University in 2013.

Once again, this information turned out to be untrue. Sardesai placed documents regarding his son’s admission process in the public domain which revealed that he had gained admission for the medical course at Manipal University on merit. Manipal University also tweeted about this issue from their official handle.

Ishan Sardesai, rank 1050, was admitted to the MBBS course KMC, MANIPAL in 2013 under the General category based on merit. The allegations made about his admission are malicious and totally false. The controversy is uncalled for.

Misinformation propagated by Mahesh Vikram Hegde – the founder of Postcard

Mahesh Vikram Hegde, founder ofPostcard News is a repeat offender when it comes to disseminating misinformation. On numerous occasions, Hegde has made false claims via his Twitter account.

“Muslims responsible for 95% of rapes”

Mahesh Vikram Hegde tweeted on July 3 that an overwhelming majority of rapists in India from 2016-2018 were Muslim. He added that 96% of victims of rape are Hindu women. 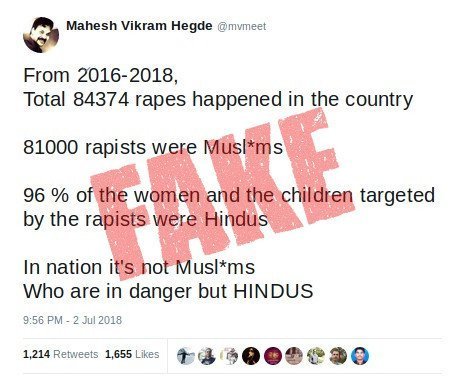 As a matter of fact, the NCRB which is the nodal agency for crime tabulation in India does not record crimes on the basis of the religion of the perpetrator and victim. This was confirmed by NCRB in a conversation with Alt News, calling this message false, malicious and complete misrepresentation of facts.

In October 2017, Hegde tweeted a photograph which showed former PM Jawaharlal Nehru in the company of women. The post was meant to show Nehru as a womaniser. 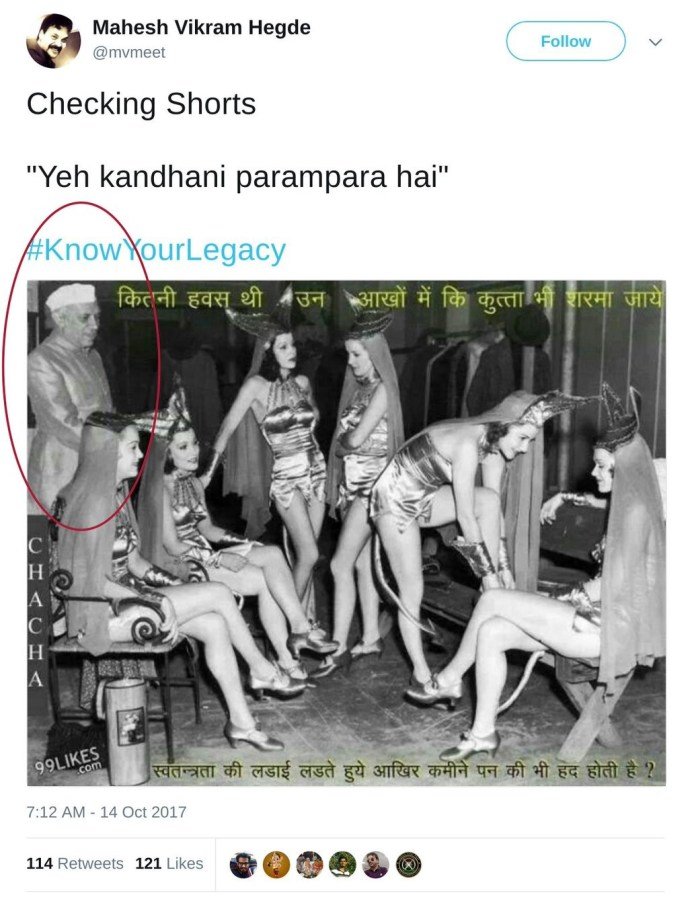 The picture was photoshopped. Nehru is not even present in the original image. Boom Live had published an article according to which this photograph is of ‘chorus girls’, a theatrical group in the USA which incorporated various dance forms such as ballet and burlesque.

Old photoshopped pic which has been making the rounds for a few years now tweeted by @mvmeet, the founder of fake news portal @postcard_news pic.twitter.com/6DofYIfvnt

Despite the numerous occasions on which it has been called out, Postcard News continues to spread fake news. This may be disconcerting but perhaps not surprising. When Mahesh Vikram Hegde was arrested in March 2018 for posting communally inciteful fake news, Union Minister Anant Kumar Hegde had expressed outrage along with numerous BJP MPs, MLAs and party leaders. Moreover, Mahesh Vikram Hegde is followed by PM Narendra Modi on Twitter. A portal like Postcard News continues to flourish because a number of ministers and members of the ruling party regularly share content from the website. The political patronage and support enjoyed by Postcard News seems to guarantee a degree of incorrigibility and brazenness.