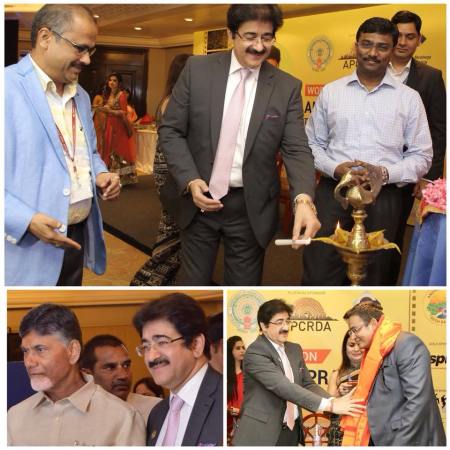 New Delhi: A well known film and television personality Sandeep Marwah who is also the five times world record holder and founder of film city Noida was asked to start media city in Amravati.
Sandeep Marwah inaugurated the workshop designed by the Government of Andhra Pradesh and conducted by Centre for Strategy And Leadership at Hotel Claridges in New Delhi.
Andhra Pradesh Chief Minister N Chandrababu Naidu said the state’s new capital city Amaravati is a dream capital and will be an innovation hub.
Assuring that Amaravati will be an altogether different city, the Telugu Desam Party (TDP) chief Naidu said it will comprise of nine cities — media city, sports city, government city, justice city, finance city, knowledge city, tourism city, electronics city and health city.
Sandeep Marwah suggested that the media city should be the centre for cultural and heritage activities and developed with a long-term vision to host international events. Noting that Amaravati is a “dream capital”, Naidu said ultimately it will be the most liveable place,