By Saurav Shrivastava in News, Politics

Former Prime Minister of India and Bharat Ratna awardee, Atal Bihari Vajpayee passed away on Thursday, at AIIMS, Delhi after a long illness at the age of 93. After the demise of Atal ji, the whole country is in mourning. But there was a friend of his, Lal Krishna Advani, whose sadness knew no bounds.

Friendships are often difficult to sustain in our daily lives and more so, in politics. But, if there is a duo whose friendship has survived all odds in Indian politics, it is that of Vajpayee and Advani.

The entry of these two big politicians into Indian politics was almost at the same time. Their friendship is not only interesting but also motivational for many people. Both leaders have been together since the establishment of the ‘Jansangh.’ The duo also contested the Lok Sabha election on Janata Party ticket in 1977. 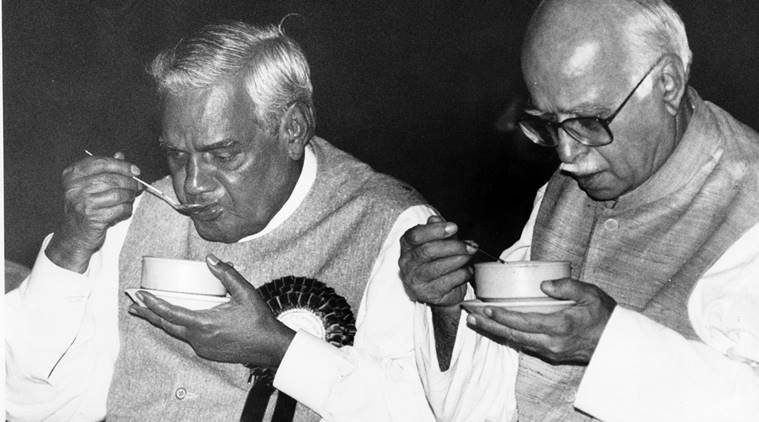 In 1998, Advani was made the Home Minister in the Cabinet formed after Atal Bihari Vajpayee became the Prime Minister for the second time. Later, L.K. Advani was also made Deputy Prime Minister of the country during 2002-2004. Recalling his friendship with Atalji, Advani had told in an interview, “When Atalji was the prime minister, if someone came to talk about the government or the party, he used to say ‘Did you talk to Advaniji? Do it once'”. Where would you find such a friendship?

In an interview, Advani once told also that in the days of their youth, both leaders used to go to eat ‘Gol Gappas’ on the streets of Delhi, when Advani used to drive a scooter, and Vajpayee ji used to ride as a pillion.

Both leaders were also passionate about reading and writing, and that was a source of profound connection between them. In May 2013, in a blog on BJP’s website, Advani had described Vajpayee as India’s finest Prime Minister.

In 2008, Advani had also written a letter to Manmohan Singh, the then Prime Minister then, requestion felicitation of Atal Bihari Vajpayee with the Bharat Ratna. In this letter, Advani had reasoned with 10 points as to why Vajpayee should be given the Bharat Ratna. Although that hadn’t been possible at that time, after the formation of the NDA government in 2014, former Prime Minister Atal Bihari Vajpayee was given the Bharat Ratna award. This friendship of Atal-Advani in Indian politics will always be remembered.

Opinion: The BJP Seems Adamant To Polarise The Post-Poll Violence In Bengal

Assam: The Under-Reported Story Of A Life Lost To Indifference And Discrimination

Will The United States And Russia Work Together On The Climate Crisis?