By Prabhat Dwivedi in Latest

Moving from Jaunpur to Lucknow to earn a livelihood:

At 60, Jeevan Ram from Jaunpur, who presently crisscrosses Lucknow carrying commuters on a rickshaw, should have ideally hanged his boots and led a retired life. But alas! that was not to be. A farmer by vocation he has two daughters of one married and the other unmarried. Like any other parent, the concerns of marrying his daughters loomed largely. To ensure he had enough money, he took to cultivating wheat in his field. 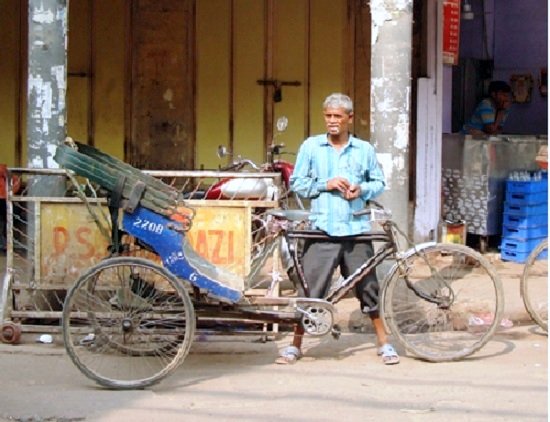 While he religiously continued to sow the crop, till the land and do the needful in terms of irrigation, life had other plans for him. In a year when Jeevan Ram planned to marry his daughters, life took an ugly twist. After taking a substantial loan from the bank to make the farmland crop worthy, so that he gets a good yield, he, unfortunately, fell sick. Sick for a very long time and a lot of money was spent on his treatment. His troubles started when a builder took his land and gave him much less amount than the land was worth.

This proved to be the end of his life as a farmer. With a never-say-die spirit, he decided to buy a rickshaw with the remaining amount and came to Lucknow to earn his livelihood and also to arrange money for his daughters’ marriage. A very active and vibrant man for whom age does not matter, Jeevan Ram loved life and life loved him back.

“Lucknow gave me new life and a reason to live. It is all by the grace of God that today I have been able to marry one of my daughters. Believe in God, he helps irrespective of the social strata you belong to” says Jeevan Ram. For now, he works as a rickshaw-puller in Alambagh. As a parting shot, Jeevan says that if a person works hard then, he can achieve anything in life. It is men like Jeevan Ram, who perhaps teach you that in life one must not give up and stare at the adverse situations in the eye.