By Penguin India in Books, History

It is Patel who saw clearly – and it would be fair to say that perhaps Nehru never entirely reconciled to this – that in Kashmir, “it is better to have an open fight than to have disguised warfare such as has been going on”.

It is Patel who recognized without fuss – and it would be fair to say that perhaps Gandhi never entirely reconciled to this – that, “if we had not accepted partition, India would have fallen into bits. Now that we have been able to salvage a major part of India and have been able to build it up into an extensive single unit, let us make it powerful”.

It is Patel who had the foresight in 1948 to tell Pakistan, “Pakistan authorities say that their enemies are conspiring to destroy Pakistan. I would say to them that the enemies of Pakistan are not outside Pakistan but inside.”

Little wonder that that Sir Bucher Roy, the last Englishman to hold the position of the Commander-in-Chief of the Indian Army said of Patel: “Sardar always reminded me of the pictures of Roman Emperors in history books. There was something rock-like in his appearance and demeanour, which bred confidence in him to an extraordinary degree.”

Patel, though, would have most likely rejected such a forceful and grand description of himself. On January 5, 1948, the deputy prime minister of India wrote a letter to the journalist Ian Stephens at The Statesman newspaper. In the letter, he expresses astonishment, and perhaps even a little exasperation, at the publication of a photograph which seems to show him raise a clenched fist during a public speech.

“In addressing public meetings, I never use a fist at all,” exclaims Patel. “At the most, it is a move of the hand or a flourish of the index finger. I am, therefore, at a loss to understand how the photograph appeared as it did. I hope your investigations would yield some results. I would be glad to know the outcome…. You can ask your photographer in Delhi to get in touch with my Private Secretary who will give him a suitable time for a photograph.”

This photograph it seems was coupled with some quotes from him about Pakistan which Patel denies ever having made in his letter, “The words put in my mouth were never uttered by me at the public meeting… I have no doubt whoever has done so has done with a mischievous intention. It is particularly unfortunate, as I am sure, you will see from the speech, that my references to Pakistan were as cordial and friendly as could be possible in prevailing circumstances.”

It is unclear how the deputy prime minister defined “friendly” for The Hindustan Times newspaper report of this speech in Calcutta reported him declaring, “But how can any plebiscite be held when fighting is going on? If we have ultimately to save Kashmir by the sword, where is the scope for plebiscite? I should like to make one thing clear that we shall not surrender an inch of the Kashmir territory to anybody.” 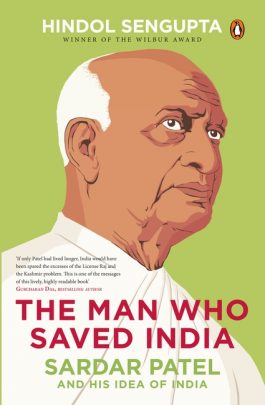 Well, I guess this was, as Patel tells Stephens from The Statesman, him being as friendly as possible “in prevailing circumstances”. But the fact that even the Iron Man of India was careful about his public image is the sort of humanizing anecdote that, to me, seems missing from the way Sardar Patel is envisaged in popular imagination today.

Think about it: Gandhi has his non-violent, charkha-spinning heartwarming image which even today produces tender Bollywood blockbusters like “Lage Raho Munnabhai” and words like Gandhigiri which is the opposite of goondagiri of lumpens and hoodlums; Nehru emerges as a red rose-bedecked chacha (uncle) playing with children and telling stories (and writing mellifluous letters to his daughter from jail) with even the whiff of a heady romance (with another man’s wife, Lady Edwina Mountbatten, no less) constantly giving him a dandy edge but what about Patel? There is barely any public relations halo around Patel – no love affairs (his wife died early, and almost nothing is known about her; after this, there is no mention of any other woman in his life), no tender letters to his children. This is a man who spoke (or wrote) little about himself or his needs.

Therefore, it is even more important to try and understand what seems to have replaced many of these sentiments in his life – the uncompromising desire for a powerful India.

But power, as we will see through the course of this book, and the search for strength are convoluted things. These are often indefinable and men who seek them – especially if they don’t even seek these things for themselves – are often hard to understand. Such men are easily made monochromatic by the sepia tint of history.

Even if we cannot find many details about Patel’s private life, it is important today to understand in detail his public contribution and what that means for us today; for independent India, in scope and size would not be what it is today had it not been for the astute resolve of Vallabhbhai Patel. This man, more than any other, constructed almost piece by excruciating piece, India as we know it today – and it is my researched contention that without the stern nerve of Patel there would be no India, but most probably a nasty warring Balkanised mess of fragmented states. We like to talk today about the idea of India. But there isn’t one idea of India. India has a multitude – and then some more – of ideas. It is not my intention to describe one as greater or more valuable than another but it is certainly my belief that without India itself, its outline from coast to coast, from the mountains to the seas, there would not be much use of any of its ideas, such as they are; for geography is not merely measurements on land, it is philosophy, culture, it is the amalgamated wisdom of a people.

Excerpted with permission from “The Man Who Saved India” by Hindol Sengupta, published by Penguin India.