By Frank Huzur in News, Politics

A brigade of socialist workers launched a bicycle march, ‘Saamajik Nyay aur Vikas Yatra’,  from UP’s Ghazipur to New Delhi, on August 28. A large number of Samajwadi Party workers would be riding bicycles through the villages, towns, and cities of UP to raise awareness on critical issues like attempts to dilute OBC and SC/ST reservation, EVM fraud, mob lynching, unemployment, rising inequality, crimes against women, among many others.

This contingent of youths embarked on a two-wheel journey from Ghazipur in eastern Uttar Pradesh and so far have addressed more than a hundred public meetings en route. Their caravan will touch down in the national capital on September 23 2018.

A couple of days ago they reached their cherished destination, Kannauj, and landed on Lucknow-Agra Expressway. The socialist workers arranged themselves to create an image of A2Y, an acronym of their cherished leadership Akhilesh Yadav. Seven years ago, Akhilesh Yadav had popularised the symbol by making a refined philosophical statement that he wrote down on his BBM status: ‘A2Y because Nobody is Perfect’.

One of the senior members of the ‘yatra’ Abhishek Yadav has been leading an entourage of over 200 cyclists. The number swells to thousands at each stops in the journey with committed local members of SP joining the march.

When they arrived in the national model village of Saifai, the birthplace of socialist patriarch Mulayam Singh Yadav and the current national president and former UP CM Akhilesh, they received a tremendous boost in the presence of their beloved leader.

Akhilesh Yadav himself travelled from Lucknow to flag off the remaining leg of the ‘Yatra’. Veteran leader and general secretary Prof. Ram Gopal Yadav and young parliamentarian from Badayun Dharmendra were also present.

In Safai, Akhilesh Yadav claimed that ‘there would be no elections in the future if the Bharatiya Janata Party (BJP) return to power in 2019’.

“The central government in Delhi is trying to kill democracy. Not just us, but many social thinkers and their friends are saying that if the BJP is voted back to power in 2019, then democracy might not be alive to breathe in the country. Future elections would be a pipedream. So the entire Opposition has just one chance to save democracy in 2019. Looking at the statements made by BJP leaders and especially Prime Minister Narendra Modi, it seems there is no one more backward than him,” said Akhilesh Yadav.

“PM Modi always claims that he comes from a backward community. If he is backward, then we are definitely more backward than him. But I am more forward than BJP people in my thoughts and achievements. I am a progressive Backward if you factor in caste location,” he added. 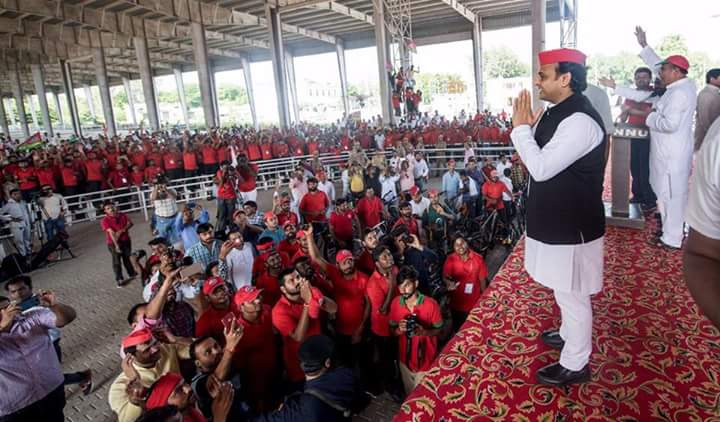 Akhilesh further charged up the massive gathering of sympathisers and said, “The BJP has poisoned the atmosphere of the country by indulging in caste politics. People have seen the ‘Double Engine’ BJP governments and their shameful failure in delivering good governance.”

“2019 is “an exam, and if we fail in our exam, then we must look for a naali (drain) and kadhai as we will have to fry pakodas together then.”

Socialist leader also took a jibe at the recent statement of the UP CM Yogi Adityanath, where he asked farmers to grow other crops because the excessive production of sugarcane can cause diabetes.
“Our chief minister is also an amazing doctor, without any kind of tests he can tell you that diabetes is caused by excessive sugarcane produce,” said Akhilesh Yadav.

Cycling campaigns have been a trademark of the Samajwadi Party’s social justice, diversity, and representation agenda discourse.

In the 1980s and 90s, it was social justice advocate and a legendary champion of diversity Manyavar Kanshi Ram. His legacy was taken forward by Mulayam Singh Yadav who rode the bicycle for spreading awareness among subalterns of the country, and now it is Akhilesh Yadav who has become a byword for the two-wheel campaign.

The political landscape of India would always remember these titans for their large-scale social and political exercise in the heat and dust of bumpy roads and farmlands.

In India, over the past decade or so, the bicycle has become synonymous with Akhilesh Yadav and his legion of followers and fans.

For Samajwadi Party and its national president Akhilesh Yadav, the bicycle is not just an electoral symbol. Over the years, it has become a two-wheel vehicle of change. It has become the most potent symbol of socialism in the country where one billion people are wrestling with the resurgent evils of capitalism and caste feudalism. 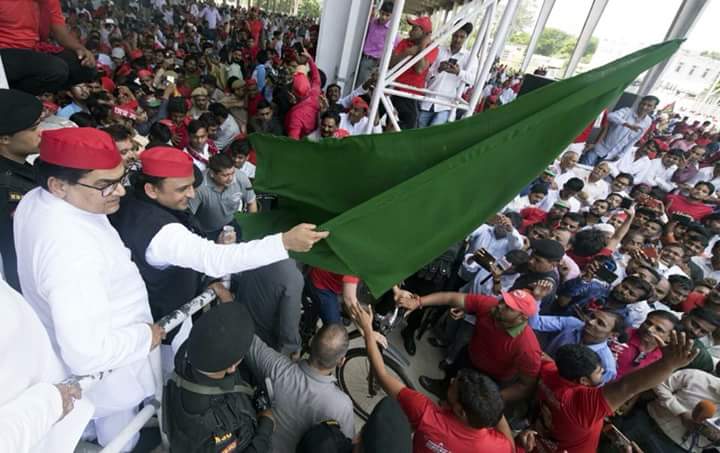 In Uttar Pradesh of India, ‘Tipu’, the nickname of Akhilesh Yadav, has inspired tens of thousands of his party’s footsoldiers to cycle for social justice, from Ghazipur to New Delhi, covering more than 800 kilometres on the pedal.

This march is quite a feat by all standard, and all the credit goes to Abhishek Yadav, an eastern UP socialist worker and a famous alumnus of Allahabad University who hogged the limelight in 2011 for black-flagging a fleet of Rahul Gandhi in Allahabad.

He showed the way to the current focus group of socialist workers in values and impact of non-violent protest, of course, at the call of his top leadership.

He showed the way to the current focus group of socialist workers in values and impact of non-violent protest, of course, at the call of his top leadership.

Even trenchant critics agree with the fact that Akhilesh Yadav has pioneered a new wave of cycling movement in Uttar Pradesh.

His covetousness for the campaign vehicle inspired him to build bicycle track in many cities, including Lucknow, Kanpur, Agra and Etawa.

Such was the scale of his passion that the young leader built the largest bicycle highway of India circumnavigating ravines of Chambal in his home district.

What personal attributes does it take to be a great leader, of an industry, institution or a government?

It’s also not about oratory skills of Hitler or belonging to a dynasty as Indira Gandhi or of humble beginnings as Narendra Modi or about enduring solitary confinement like Nelson Mandela. And, and it’s also not about winning a late-term in the 90s like Mahathir Mohammad.

The first and foremost quality of a good leader is to be fair and objective. A leader does not take what is similar to his views as facts and base his decisions on that. 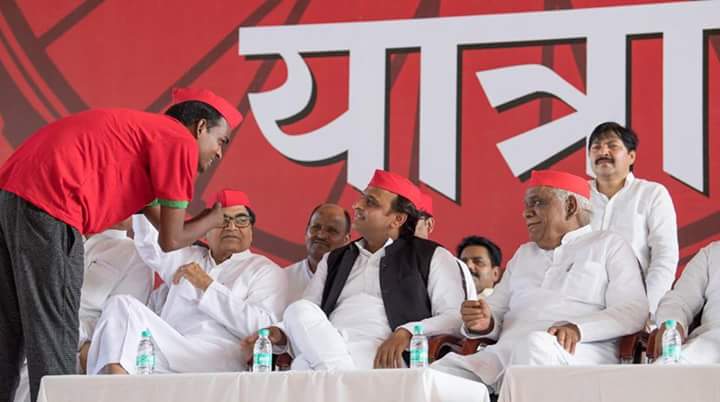 Akhilesh Yadav is one such leader who isn’t blinded with a self-serving bias. He is a leader who does not stand for his specific religious or political views. His personal beliefs are his private matters.

He values personal and public beliefs of all caste and sects. Once he assumes the political role, his belief spectrum expands to includes everyone’s beliefs. He is not egoistic and power hungry. He will not compromise on truth to win accolades.

He believes in what is true, even if it is a bitter pill to swallow. It’s not about pleasing people at the cost of manipulating or misguiding the public.

Akhilesh is focused on specific, achievable, reasonable, and measurable goals. He is looking for the welfare of the generations and not temporary fixes.

He leads by example, helps people understand that they are accountable for their society and its outcome. Akhilesh does not make lofty promises but realistic ones.

Akhilesh makes a sustainable promise and is a man of his words. He is honest even if it does not get approval. People know where they are standing with an authentic leader. Leaders build bridges, not erect walls. He is a natural mediator rather than one that creates conflict, tension, and separation.

Standing up for his beliefs, the young socialist leader is steadfast in opposing the ideology of hate and division, BJP-RSS practices with full force nowadays.

He is inspiring many with his meaningful and straightforward philosophy of socialism. He stands for new age socialism with a cocktail of two potent poles, proportional representation of the deprived, as well as Temple for Brahmanical doctrine, idolising ancient mythological deity Vishnu.

Akhilesh Yadav can become a powerful symbol of resistance against fascist politics of the BJP and caste inequality in India. His moves and countermoves are followed with great interest by media and masses alike.