Did Ronaldo Really Deserve A Red Card In His First Match With Juventus?

By Dua Subzwari in Sports

Sometimes football can be really rough and a glimpse of this roughness was seen during the Champions League match played between Juventus and Valencia. Juventus’ newly signed forward Cristiano Ronaldo was handed a red card during the 29th minute of his debut match with Juventus in Champions League. Ronaldo apparently clashed with Jeison Murillo of Valencia and was shown a red card by the referee Felix Brych. This incident created a lot of buzz, but was the red card really justified? As soon as I read the news about CR7’s Red Card incident, I rushed to find the clip. I went through the clip lots of times and then found that Ronaldo harmlessly clashed with Murillo and appeared to pat his head aggressively urging him to get up. Soon after this turmoil, the referee handed a red card to Ronaldo. 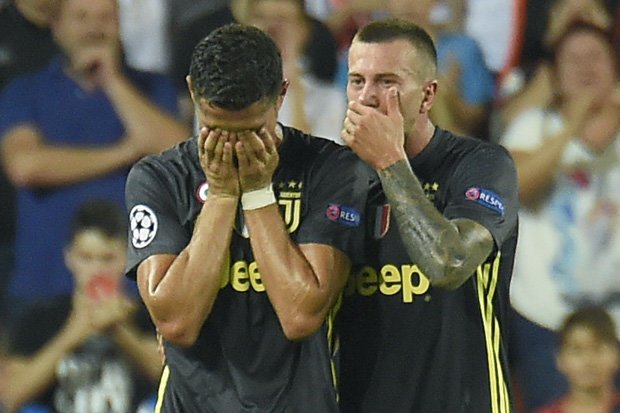 Ronaldo was seen trying to convince the referee but he stood firm with his decision and the Portuguese star left the field in tears. Ronaldo might also miss the match against Manchester United next month and that is going to be very heartbreaking for CR7 fans. I have seen various football matches and have witnessed huge clashes ending up with just a penalty, FIFA world cup too was quite rough, especially when it came to Belgian players. Football is a game of aggression, we see players fighting and clashing but how many end up getting a red card? As we live in a democratic country where we enjoy Freedom of Speech (Although Freedom of Press has various restrictions), I believe that giving  Ronaldo a red card for such a small clash was not fair. Brych could have handed him a yellow card or a penalty but handing a red card was too much. Well, this was my personal opinion. Here’s a poll attached with this article, let’s see what others think.

Why Building A Sports Culture Is Crucial For India To Develop