Is This Pattern of Media Trials A Threat To Democracy?

By Mudita Sonawane in Media, Society

Last few days witnessed a great turmoil of events – the atrocious raids at the houses and offices of nine eminent social activists in seven major cities of the country and the arrests of five of them, Sudha Bharadwaj (Human rights lawyer), Gautam Navlakha (Human Rights activist), Vernon Gonsalves and Arun Ferreira (both Lawyers and activists) and P. Varavara Rao (revolutionary writer) by Pune Police under UAPA (Unlawful Activities Prevention Act). The raids began from 6.00 am of August 28 and went on till the evening when they announced these arrests. As we all know from the news, according to the police, these arrests were based on the names that emerged during the investigation of five other activists that were arrested in June (Rona Wilson, Adv. Surendra Gadling, Mahesh Raut and Prof. Shoma Sen and Sudhir Dhawale, who had participated in ‘Elgar Parishad’ held at Shaniwar Wada, Pune on December 31, 2017, a day prior to the Bhima-Koregaon riots) who are still in prison, which is surprisingly overlooked by even the ‘left-wing’ (does this mean that the left wing accepts that those arrested in June are really biased? Or does this mean that even the left wing is caste biased? Let’s see). 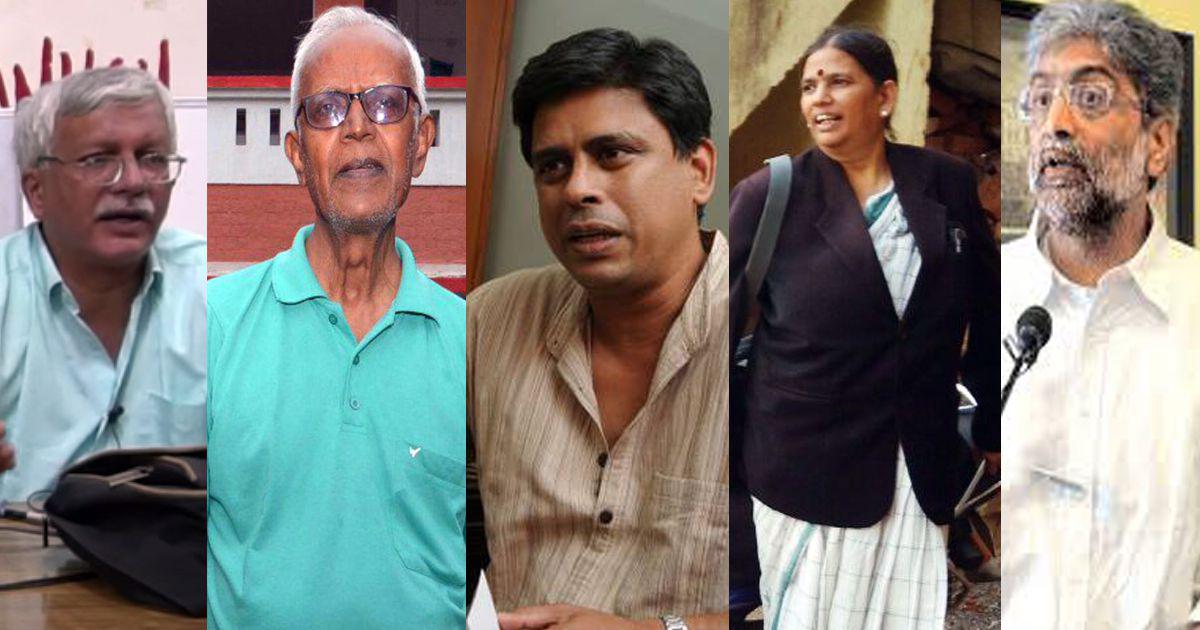 a started flooding with hashtags like #BhimaKoregaonRaids and TV media (which is called as Godi-Media or ‘North-Korean Media’) started presenting their own theories and drawing conclusions like these are Maoists in search of recruits in cities, and started calling them ‘Urban Naxals’, which is, by the way, the title of the book written by ‘filmmaker’ Vivek Agniotri (maker of the film Buddha in Traffic Jam). Apparently, Vivek Agnihotri took this as an opportunity and addressed in a tweet saying he wants young, bright people to make a list of all those who are defending ‘Urban Naxals’. This is where the twitter community got shot up and started running a hashtag #MetooUrbanNaxal (the same way the tag ‘Anti-National’ got ridiculed by the masses), which topped the trending hashtags of the day. On a serious note, mixed opinions were being expressed by the intellectual circle, some said this is an undeclared emergency, some said this is a distraction from the inability of police in the arrest of the actual culprits Sambhaji Bhide and Milind Ekbote, or from the investigation of murders of Gauri Lankesh and Dr. Narendra Dabholkar and the weapons raided in Mumbai from the houses of people associated with Sanatan Sanstha for the supposed plan of attack at several places and events including upcoming Sunburn festival in Pune.

Additionally, it’s the same day when the report of RBI was made public, which says 99.3% of the old currency has been returned, depicting the complete failure of the mission to capture fake currency through demonetization. Also, with all the attention elsewhere, Supreme Court decided not to supervise the investigation of 2002 Gujarat riots.

While following the news channels I realized that all of them were already claiming that these activists are linked with Maoists and with this presumption, they delivered the rest of the ‘reporting’. None showed the timeline of the work done by the arrested activists, instead, they mentioned them as if they were anonymous third party suspects whom public didn’t know about. The only reliable sources to get verified news updates were independent news houses. This reminded me of other incidents where media created a similar havoc, i.e., when JNU students were arrested under sedition in 2014, or even before that, the arrest of the cartoonist Aseem Trivedi in 2012. The difference between the former two cases and the later is the ruling party, which was Congress before 2014 and now it’s BJP. One might state that these events are looked at as just a content for big breaking news, they run it over and over for a few days and then forget everything to move on to new content. But is it that easy to forget for the masses who were continuously bombarded by the elegiac news headliners? Or to forget the unverified claims made by mainstream media, and the self initiated trials of these people? The answer is no.

It’s not a news that there are people recruited for trolling, threatening and harassing those who don’t go along with the flow of power. It’s not an exaggeration if we say that when we are told two crore jobs will be created every year, these are the jobs they are actually talking about(!). The report by Annie Gowen in The Washington Post (can be read in the link) is chilling and shows how speedily we are heading towards anti-Democracy. The right-wing ‘activists’ are consistently beating, killing, and threatening anyone who has difference of opinion, and except for one lame plea for ‘not to spread dirt through social media’ by the PM in last four years, no strong actions have been taken whatsoever. They are growing continuously in number and being trained to handle weapons and to effectively cause ‘silent’ serious injuries to avoid visible wounds (actually, now they don’t even have to care for wounds, because currently it’s not them, it’s the activists, writers and journalists who are branded as anti-nationals and Naxals).

The murders of Gauri Lankesh, M. M. Kalburgi, Dr. Narendra Dabholkar, Govind Pansare and many other nameless humans who were threatening the cause of ‘Hindu Rashtra’ based on discrimination, and their delayed, slow and aimless investigations show the lack of interest in justice in general. All these were renowned eminent free thinkers, who got enough time for setting up the background for their activism in society, and the plots to ki 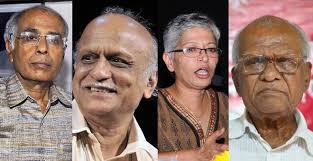 ll them were designed by the likes of Sanatan Sanstha who clearly feel threatened by their work. But now a new dangerous trend is being followed. If we look at the ownership of the big media houses, we can clearly see that they are all bought up to promote a certain agenda. The TV news channels is no longer a reliable source for getting report of the happenings. They look at the surroundings like a hawk to spot the target, which they get, in events like 9 Feb 2016 (which the channels used to spew venom in Hindu-Muslim conflict, enhance the fake sense of patriotism and created a virtual threat of JNU students to trend the term ‘Anti-National’) and now the much discussed Elgar Parishad (which was actually a year old event, but used as a distraction from actual culprits of Bhima-Koregaon violence, to make the left-right wing conflict strained to a new level and the new term ‘Urban-Naxals’ got coined by news channels). Their behavior also suggests that whenever they see a change in the TRP of their beloved right-winged leaders, they make more and more vulgar and false claims and accusations and news taglines against the opposites. Which means they act as PR agents of the current ruling party. When we switch on to any ‘news’ channel, the only thing that we get is a high BP and pro-war thoughts. These channel debate conductors have two common skeletons,

This is the skeleton of National leveled mainstream media houses. The prime problem with them is the companies that are funding them are one of the big shots in bond with the ruling parties and of weaponries. Of course, they will promote only pro-war fantasies. Also, the more spread of fake news and blind faiths, the easier is the spread of the political agendas. Their ‘journalism’ methodology is so cheap that saas-bahu dramas of Ekta Kapoor look better than them. One more reason why this is problematic is that, a major section of the population relies on these bought up media houses, just because they does not have access to/awareness about independent media houses (like The Wire, The Quint, Newslaundry and so on with their YouTube channels) giving true news reports. They are the ones belonging to the masses who fall prey to the dreams shown for their upliftment, the ones being manipulated by the ruling masterminds, the ones who are joining their ‘armies’ of vigilantes, mob lynchers, trolls, harassers, and they are the ones who remain forcibly ignorant about their own oppression. It’s not their stupidity, it’s a super intelligent plan by the power houses of right-wing. To turn these masses against those who are fighting ‘for’ them in some or the other way.

The media literally ‘brands’ the targets and then some day, we get the news about the attempts to demolish these targets, many get continuously threatened on social media, through SMS, yet no actions are taken by the Government (and for women, it’s just another usual day!). Some are actually attacked physically for e.g., the recent attack on JNU student Umar Khalid on August 14. The attackers also posted their video, saying that they are proud to have done this and though they missed the target, they will accomplish their mission to kill him one day. Looking at the video, they clearly didn’t belong to the ‘privileged’ mass. They are cunningly made oblivious about their real problems and enemies, so that they hotheadedly do such foolish things. These times are dangerous than emergency because though we clearly know the culprits of anti-democracy, but we don’t have the mechanism to fight them, simply because the masses blindly follow them and be their puppets. Hatred towards the unfamiliar is being spread at every level, so collective efforts are necessary on all the levels. Even these efforts will be fruitful only when the ‘puppets’ will understand that they are ‘puppetized’ and that their individuality is important.