Last month, the 2+2 dialogue between India and US that concluded in New Delhi gave some sweet memories as well as some nightmares to India. The inaugural meet covered a broad spectrum of issues, but main highlights were defence and diplomatic ties.

During the dialogue, India and US signed Communications Compatibility and Security Agreement (COMCASA), an India-specific version of Communication and Information Security Memorandum of Understanding (CISMOA). The deal will provide an impetus to the transfer of communication security equipments from the US to India, facilitating more “cohesion” between the two defence forces as well as with the NATO countries that use US-origin communication system. After signing COMCASA, India has now signed three out of four foundational agreements that the US signs with its close allies. The other two are the General Security of Military Information Agreement (GSOMIA) signed in 2002 and Logistics Exchange Memorandum of Agreement (LEMOA) signed in 2016. These three agreements have paved the way for Basic Exchange and Cooperation Agreement for geo-spatial cooperation (BECA).

India In A Tight Spot 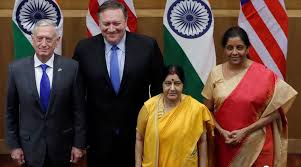 At the end of the press conference held at US embassy no statement was issued regarding the waiver for India on the application of Countering American Adversaries Through Sanctions Act (CAATSA). India heavily relies on Russia as 60% of its defence equipments come from Russia. Presently, India and Russia are at the final stage of signing an agreement on the S-400 missile defence system. Trump administration has not given any hints with regards to S-400 deal, and if it remains the same then India could face sanctions, and in turn, US will lose an ally. Another issue of immense geo-strategic importance for India is the relations between Iran and America. With the US bailing out of Iran nuclear deal and now forcing its allies to cut trade ties with Iran, India is confronted with a major challenge to reduce its oil import by November. Development of Chabahar port in Iran by India is another such issue that has become a bone of contention between India and US.

India on its part needs to stand its ground with regards to Russian and Iranian issues and must indicate that the cooperation with the US cannot reach to its full potential unless Trump administration becomes receptive and accommodative towards India’s concern. At the same time, if Trump administration wishes to increase its influence in the India Pacific region, US should realise that it cannot afford to lose a partner like Indian, and hence, needs to chalk out its plan carefully.

August 5: A Very Historic Day For A Very Secular Country