The Govt. Just Gave Itself The Right To Invade Your Privacy, Thanks To This New Order

By Siddharth Tiwari in News

The Orwellian nightmare might just become a reality as Union Home Ministry on December 20 allowed 10 central agencies, including CBI and NIA, to snoop on any computer.

In an order issued by the Ministry of Home Affairs, the government gave the investigating agencies sweeping power to not only intercept and monitor, but also decrypt “any information generated, transmitted, received or stored in any computer”. Ten intelligence agencies that have been given this unprecedented power are: CBI, NIA, Intelligence Bureau, Enforcement Directorate, Directorate of Revenue Intelligence, Narcotics Control Bureau, Central Board of Direct Taxes, Cabinet Secretariat (R&AW), Directorate of Signal Intelligence (in Jammu and Kashmir, North-East and Assam only) and the Delhi Police Commissioner. 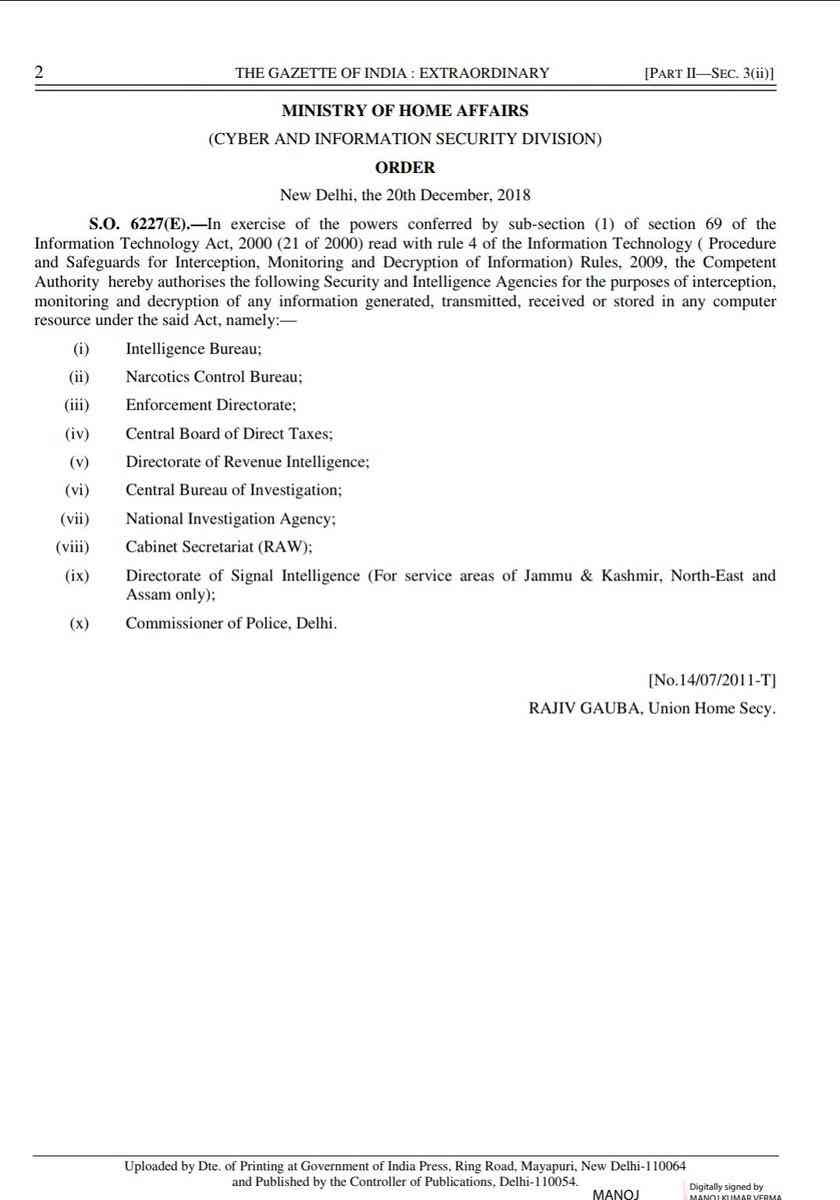 According to news reports, the order issued by Home Secretary Rajiv Gauba under the section 69(1) of the Information Technology 2000 empowers the Union government to direct the above mentioned 10 agencies to intercept and decrypt information from any computer. In order to do so, the Central government should be convinced that it is in ‘national interest, sovereignty, peaceful diplomatic relations, to prevent cognisable offence, or to maintain public order’.

The order mandates the subscribers, service providers, or any person in charge of the computer source to extend all technical assistance to these agencies. Failure to do so will invite seven-year imprisonment and fine.

Reacting on this move, CPI(M) general secretary Sitaram Yechury said, “Why is every Indian being treated like a criminal? This order by a government wanting to snoop on every citizen is unconstitutional and in breach of the telephone tapping guidelines, the Privacy Judgement and the Aadhaar judgement.”

Why is every Indian being treated like a criminal? This order by a govt wanting to snoop on every citizen is unconstitutional and in breach of the telephone tapping guidelines, the Privacy Judgement and the Aadhaar judgement. https://t.co/vJXs6aycP0

The concerns over sharing the data are valid given that India is yet to implement a holistic data protection bill. While the government has come up with a draft Personal Data Protection Bill, 2018, news reports claim that the bill may not be introduced in the ongoing winter session of the Parliament.

Earlier this year, a survey conducted by defence grade technology maker Thales claimed that data breach incidents in the country are higher than the global average. Several incidences of data compromise, especially Aadhaar-related information breach, were reported this year. It remains to be seen how India manages to protect data and personal information while giving a free hand to the agencies to snoop on any computer. These agencies have also been exposed to hacking in the past.