How A Community Of Writers Showed Up To Bat For Our Women In Blue!

By SHEROES in Feminism, Sports

Did you know that only 9% of Wikipedia editors are women (according to a survey in 2011)? In India, the numbers are even lower at 3%.

A Wikipedia link is literally the first one that pops up in any Google search, and hence, literally the most important one, determining what we know about an individual. The result of such a skewed gender ratio impacts the overall flavour and representation of women on the world’s largest crowd-sourced encyclopedia. 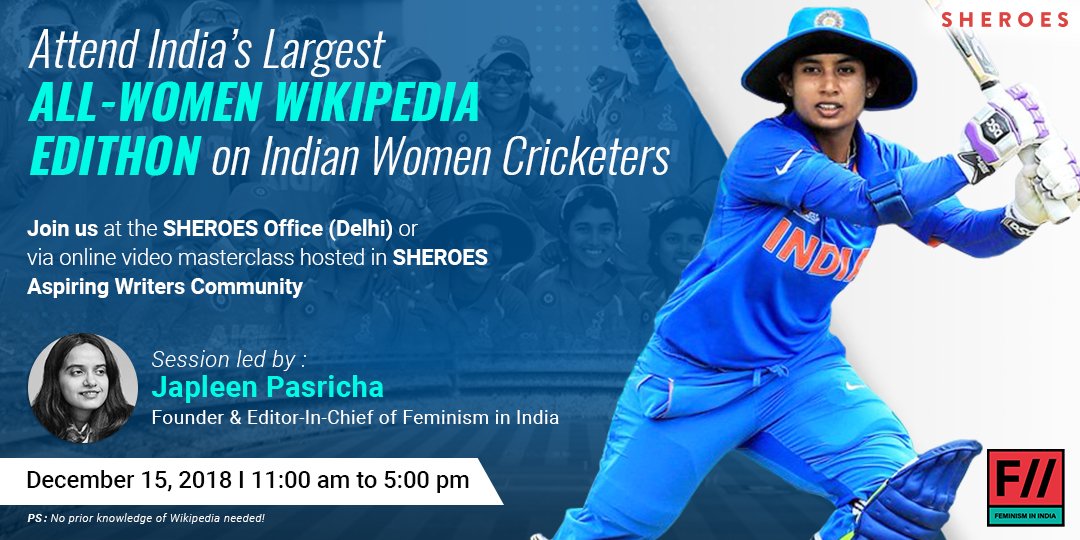 Take the case of Indian women cricketers who are bringing home the trophies. The equity of women’s cricket in India is rising. But a quick Google search reveals sparsely populated wiki profiles for most women cricketers, except for prominent players like Mithali Raj and Harmanpreet Kaur. The profiles are purely functional stating names of mothers, fathers and siblings, hometown of the player and what position they play on the team, but not much beyond that.

To help shake up this bleak narrative, on Dec 15, the SHEROES Aspiring writers’ community and award-winning publishing platform Feminism in India, came together for an all-women wikithon. During this activity, we collectively researched, edited and wrote up the profiles of our Indian women cricketers, bringing them a little closer to reflecting their brilliance on the field!

Before getting started, our community needed training on how to become savvy wiki editors. This in itself is a skill, as there are strict rules to help keep information as authentic as possible.

In an online video masterclass, Japleen Pasricha, Founder of Feminism in India (who has been hosting such wikithons for over two years now), guided our community on how to create a Wikipedia profile, how to find legitimate sources of information and cite them when building a story, and also how to write in a gender-savvy manner.

The masterclass, hosted at the SHEROES office, was broadcast live to the entire SHEROES community, and several members joined remotely, learning and posting their queries on the go, before diving into the actual editing bit.

When I quizzed community members on what inspired them to give up their Saturday for a crowd-sourced activity, to support our sportswomen, I received interesting responses. Rashmi said it was her way of “supporting our team”. 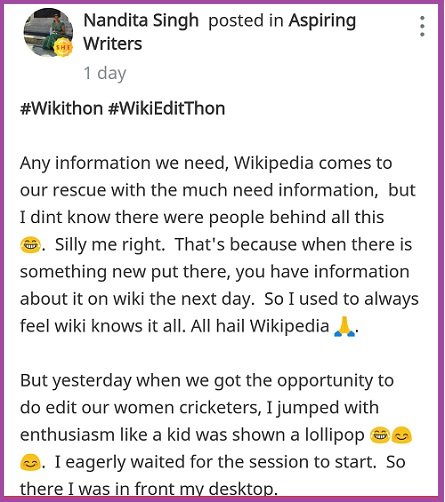 Seema Sharma, a teacher by profession, who is passionate about sports, said she “wanted to do her bit”.

Kavyashree, a budding writer, says that “women’s cricket is as important as men’s cricket.” Agree!

Riya Gaur, a content strategist articulates in more detail. She says, “I am a cricket fan but till date mostly have knowledge about our Men in Blue. Through this event, I would like to enhance and spread knowledge about our Women In Blue. It’s high time that the cricket-crazy nation, India, know about its women champions and celebrate them like their male-counterparts.”

I myself edited the profile of Nuzhat Parween, a 22-yr old wicket-keeper from Singrauli District in Madhya Pradesh. Her erstwhile profile was very functional, mentioning a few basics about her cricketing career.

While researching, I came across FemaleCricket.com, a wonderful platform, based out of Mumbai, that features all women cricketers in detail. Here I discovered a quirky interview with Nuzhat, that revealed a lot. 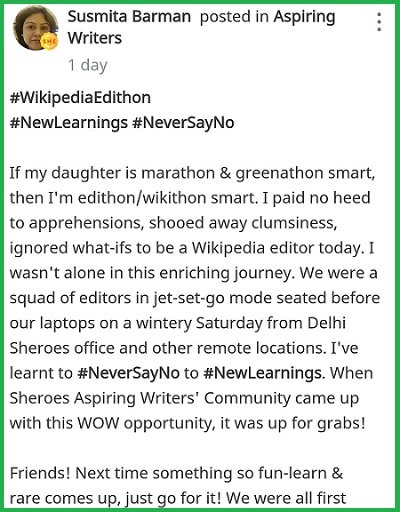 She used to play gully cricket with the boys in her neighbourhood. She went on to become the captain on the under-16 football team in Madhya Pradesh, and eventually was pulled into cricket due to a dearth of players, when Singrauli was forming a district level cricket team. Her performance in these district-level matches did not go unnoticed and she was selected for our national team. Her jersey number is seven, and cricketers Mithali Raj and Sarah Taylor are her inspirations :).

Post the wikithon, I’m happy to share that 21 articles were edited in a span of four hours! Other cricketers whose stories were built up, include Gargi Banerji (currently the only woman in the running for the position of coach), bowler Sneha Rana, all-rounder Deepti Sharna and  batswoman Jemimah Rodrigues.

Travel blogger Nidhi Thawal chose to build up the profile of bowler Ekya Bisht, who hails from Nidhi’s own hometown Uttrakhand.

Post the experience, Lipsa Patro said she felt “awesome” and that the day brought with it “immense learning”. She edited wicketkeeper and batswoman Sushma Verma Devi’s profile and shares, “amazing fact about her, which I didn’t know before – she had a major contribution in recent India-Pak match, where India won by 95 runs.”

Mommy blogger Priyanka Nair tweeted out that she was super excited to learn a new skill. That’s the spirit!

Rini Sihna, an editor by profession in the publishing space who worked on batswoman Veda Krishnamurthy’s wiki page, captures beautifully, a little of what we all felt, “participating in the edithon will be my small contribution to giving the Indian women cricketers’ team the representation and visibility which they rightfully deserve.” Touche!

Ladies, if you’d like to learn how to edit wikipedia like a pro and help take the 3% of Indian women editors on Wikipedia to 50% and more, watch Japleen’s masterclass and join this ongoing mission!

The author is Head of Communications at SHEROES, a writer at heart, and passionate about the women’s narrative. She has been a SHEROES community member since 2012, and loves the idea that women supporting women can make for a more progressive, awesome world.