By Arun Chandra in Society

This is about the Zomato delivery person seen eating a customer’s order in a viral video, which we should believe to be true because it’s there on the internet.

The social media handle of Zomato was flooded with abuses and outrages people blaming the company for making their packages vulnerable. These are the same people who mistreat the delivery guys and are too crunchy to even tip them.

For everyone’s knowledge, Zomato gives the ability to tip the delivery person and for everyone every 5-star rating they get Rs. 5 to get credited, but who cares, right? When you can have hot food at your doorstep in half an hour after midnight, why would you care about the person who delivers it?

I hope this story is shared as much as the Zomato delivery man eating food from customer's parcel. @swiggy_in https://t.co/U7f1yxwpf4

The average monthly salary of a Zomato delivery driver is ₹18,971. In a metro city, it’s hard to survive with this kind of salary. Moreover, these guys have to bear all the expenses for fuel, and pay out of their own pocket for any damaged food items.

The elitist privileged urban folks crib sitting in their cocoon of comfort to get their food delivered, they complain to customer care for the slightest delay in the order even if there is heavy rain outside. No one wants to step into the shoes of the delivery person to see from their perspective.

The most fuckin food service is Zomato, they just make fool of customers they have……. There is already a video where a zomato delivery person is eating all the food before delivery and now I am not having food because they cant deliver…….. Because Zomato is a chutiya

People lose their mind when the rider calls us asking for directions, immediately files a complaint. People without hesitation call in for pakodas and chai during heavy rain for the social media post without realising the hardship the delivery person has to go through to get it delivered on time.

@Zomato @zomatocare @ZomatoIN Saw one video on Twitter of your delivery boy eating food to be delivered to a customer and me deleted your app. Now this message circulating on @WhatsApp You start working on your image correction else we might have more of such messages on SM. pic.twitter.com/kp7LTsdq6i

It’s easier to crack jokes and feign outrage over the Zomato rider who dared to take a bite than to empathise. These are the same people who display outrage on late delivery of Amazon Prime products, even if it’s delayed for just a couple of days. It’s justified for a paying Rs. 999 per year making one entitled for a delay in delivery.

@ZomatoIN @Zomato please don't terminate that delivery person, who was eating customer's food.He is realizing also what I saw.He has family and children will be hungry..Penalize him and keep him again in your https://t.co/TwvFDfUdHS's a humble request from Zomato customer

I am happy that there are sensitive people out there.

I am not justifying the video, neither I am going to rage, as we can’t determine the authenticity of the video. I would like to rather remind you the inequalities that exist among us.

The next time you order a biryani, greet the delivery person with at least with a smile. Make sure you tip them for the order.

I take the time to appreciate Zomato for introducing the tip initiative, where the entire amount get transferred to the rider.

Also, look at this meme created by me. 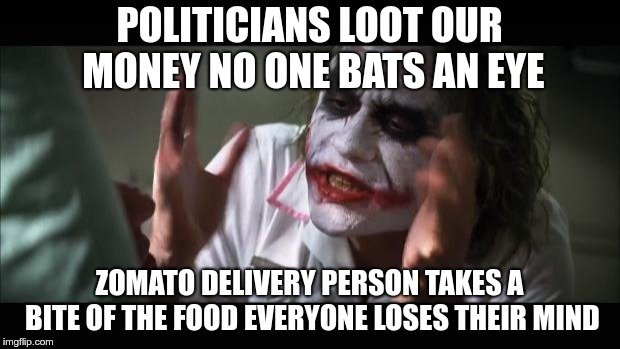