By Amit Jat in News, Politics

The controversies associated with Rahul Gandhi are not going to end anytime soon. With his rising popularity among the pubic, he is becoming a threat to the corrupt opposition party leaders. All these years, not a single charge of corruption has been filed against Gandhi, which makes it harder for the members of opposition to destroy his image in front of the Indian public.

The young Congress party president has a clean image which is hard to maintain for most politicians in our country. As Rahul Gandhi has managed to gain the trust of majority of the population, he appears as a willful leader bent on eliminating the poison of corruption from Indian politics. This is the major reason for increasing hatred against him in the eyes of many prominent politicians and leaders.

The only possible way for the opposition to prevent Gandhi from gaining the public support is by tarnishing his image in front of them by fabricating false cases against him. It is a well-known fact that Gandhi had been falsely accused, and the case did not stand a chance in the court due to the lack of evidence in the charges which were formed on false grounds. But the case has managed to grab the attention of media aided by some corrupt politicians. And now it’s being presented to the common people in a calculated manner by the media – aimed to destroy Gandhi’s image. 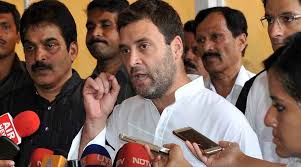 Rape allegations against Gandhi is a political stunt played by Samajwadi Party’s ex MLA, Kishore Samrite of Madhya Pradesh. From the beginning, the rape case against Gandhi was found to be built upon a series of lies.

A rape case was registered against Gandhi alleging that he was involved in the gang rape of a 24-year-old girl. It was advertised in the media that he attended a party on 3rd December 2006 where he was accompanied by seven other people in the party out of which four were foriegners. The rape case against Rahul Gandhi lost its credibility on the fact that the identity or names of these foreigners were never found.

Rape is a very serious offense and not a single piece of evidence associated with it was left unchecked when investigation was probed in the matter. Media tried to blow the case out of proportion by making up stories based on lies only to defame Gandhi.

Another major controversy associated with the rape case against Gandhi is that a private party was being held at a VIP guest house under high security. A 24-year-old girl Sukanya Devi appeared out of nowhere in the party without any invitation. The presence of high-level security at the party failed to stop the young girl. No additional knowledge of what went down on 3rd December 2006 after Sukanya’s arrival at the party (where Gandhi was also present) has been found.

A complaint was requested to be filed against Gandhi by Sukanya and her mother Sumitra. They went to the Police Headquarters in Amethi to lodge their complaint after which Sumitra claimed that the inspector present on duty refused to file their complaint.

As the part of an ill-advised strategy by the opposition, Sumitra held a press conference to cover this story. A story built upon lies and fabricated to destroy the image of one of the most prominent political personalities of India only to grab the attention of reputed media channels. Some reporters covered her story, but nothing came out of this stunt. Things started to fall apart for Sukanya Devi, and she went to the Human Rights Commission and filed her complaint against Gandhi and his friends.

Before the reason of filing a false rape case against Gandhi could be known, Sukanya Devi disappeared mysteriously along with her whole family, and no one knows their whereabouts now.

In order to take advantage of this situation to defame Gandhi in front of the people of India, Kishore Samrite filed a case against Gandhi on the charges of raping Sukanya Devi and detaining her illegally since 2007. Even though the case lacks single piece of evidence, an inquiry was commissioned to the CBI to investigate this case further. As per the report presented by CBI in the Supreme Court, no proof of Gandhi’s involvement in such a crime was found. It was also pointed out in the CBI report that the website which published the fake news on this case originates from another country.

In light of these events, the rape charges against Rahul Gandhi were dismissed by the Supreme Court and the petitioner of this case was fined with an amount of  Rs 10 lacs.

This case was intended to destroy Gandhi’s clean and corruption-free image and prevent his increasing popularity in the nation.