By Aariz Imam in Menstruation, Politics, Sexism And Patriarchy

Courtesy ANI, Narendra Modi has clarified his position on both the Triple Talaq Bill as well as the movement for women’s right to enter the Sabrimala temple. Though problematic on the face of it, here is a remarkable effort in the defense of the indefensible.

While he classified the former as a tool for ensuring equal rights for Muslim women, he ended up contradicting himself when it came to talking about gender justice for women in the Sanatan faith. The Prime Minister categorically stated that the Sabarimala issue was one of tradition and was totally different from the Triple Talaq Bill which was a matter of gender equality.

Last year, the Supreme Court in a historic judgment upheld the right of Hindu women of all age groups to worship at Lord Ayyappa’s shrine. Incidentally, a year ago, the court also said that Triple Talaq, pronounced in one single sitting, was null and void. 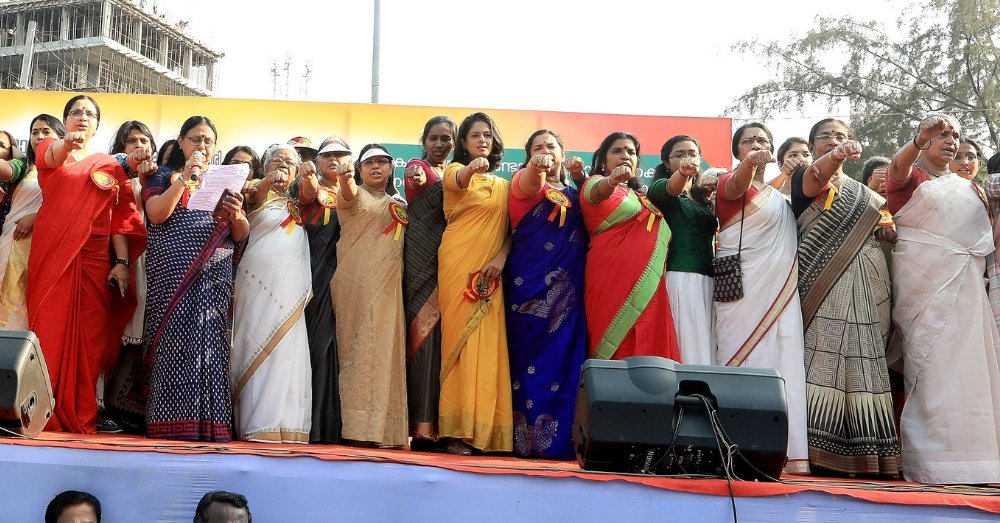 Lord Ayyappa’s devotees believe the deity was celibate, because of which women’s entry into the shrine is disrespectful, and violates the sanctity of the temple. Basis this argument, there has been a tradition where women of menstruating age are not allowed entry inside the Sabrimala temple.

Since the Supreme Court judgement, multiple attempts to enter the garbhagriha by women’s groups have been thwarted by the temple board. Ayyappa devotees from across the state have taken upon themselves to block the implementation of SC’s judgment. Pinarayi Vijayan’s government, one of the most progressive in the country, though in favor of women’s entry has found it difficult to implement the court’s order. The situation has been worsened with BJP harbouring a flicker of hope—establishing itself in the southern state through the ongoing controversy. Rooting for faith seems to be the party’s only trump card.

The Prime Minister, without any burden of implementing the SC order on his mind, took an unambiguous stand in favour of banning menstruating women from the temple. As it appeared from his interview, the opinion of the Prime Minister didn’t offer much of a surprise, except that it put on display his hypocrisy for everyone to see.

Prime Minister Modi extended his subtle support to the citizen protests over Sabrimala, despite a majority Supreme Court ruling in favour of the women. To support his argument, he said that the voice of the one dissenting woman judge on the bench holds importance, who stood for the tradition and the continuation of the ban on women. On similar lines, despite placing the issues of Sabrimala and Triple Talaq on two different pedestals, minority opinion in the Triple Talaq judgment that called for the state to make law on the matter held sway as the government obliged with a bill in the parliament in real short time.

With due respect to the Prime Minister and his party’s nuanced reading of the court rulings—where even the dissenting judge’s remarks hold ground, to the extent that it supercedes majority opinion and effectively discards the court ruling on the matter—one must point out that however the same curiosity at reading the minority judges opinion at other incidents are missing. This also sets forth a dangerous trend that could have implications in the Babri Masjid dispute, in which a judgement is due in the next couple of months. Going by the recent examples it appears even the minority ruling of the court in favour of the Mandir camp would be sufficient to galvanise public opinion.

Regardless of the Prime Minister’s balancing somersault, the reality is that the civil rights of women in India across religious and regional divide (despite having constitutional backing) are left at the mercy of patriarchal mindsets. The position taken by the Prime Minister only further underlines the problematic nature of gender discourse in our country. Even when the Triple Talaq Bill is being advertised as an act required for gender justice, it selectively targets Muslim men and puts them behind bars by criminalising triple talaq, which is essentially an act that is civil in nature, and has already been declared null and void by the Supreme Court.

The intention of the government through this legislative adventurism is everything but gender justice. It’s a concerted effort at devising further sophisticated tools to incriminate Muslims. Similarly, prioritising tradition over gender justice while declining women entry in places of worship is far from being a pro-Hindu woman stand.

Now that the Prime Minister has spoken, the citizen must identify for him the difference between civil rights as against faith and tradition. Moreover, it must be brought to his notice that the Constitution grants equal rights to the women of this country, which is consistent with their faith, has scope for organic growth, and places upon them necessary reasonable restrictions. The same as every one else. Any extra-constitutional reading of the rights paradigm therefore is grossly untenable.