The Journey Of Sabarimala: From An Emotional Issue To A Political Game

On September 29, 2018, everyone waited eagerly for a very important verdict. The case was filed as a PIL to the Supreme Court of India requesting for the entry of women of all ages into the Sabarimala Shrine in Pathanamthitta, Kerala. This verdict overturned the Kerala High Court’s 1991 decision banning the entry of women between the ages of 10-50 from entering the shrine.

One of the biggest argument raised by the so-called devotees who are against the SC verdict is that the deity of Sabarimala, Lord Ayyappa is a Naishtika Brahmachari, or is like a sage who keeps himself away from women. They also say that a deity is different from a god. It’s the deity that makes the temple holy and not the God.

“Each temple has its own unique traditions and it must be respected” is popular opinion among the conservative Kerala population. There are also temples across India which do not allow men to participate in certain rituals. This comes with the fact that Sabarimala is the only Ayyappa temple which restricts the entry of women. Considering this, we may say that Sabarimala is unique in its own way.

When the verdict came out on September 29, all parties including the RSS, the BJP and the INC welcomed the verdict, overturning the ban and called the move acceptable and progressive.

A handful of right-wing groups opposed this. They claim that the verdict is biased, pro-left, anti-secular and anti-Hindu. The biggest point raised was that the court can never (and should not) intervene in the matters of faith and religion. The story never ended here. There were a lot of protests by different groups and also a statewide bandh.

The political parties who saw that anger was growing against this issue converted the issue from an emotional to a political one with wide sloganeering against the left government led by Pinarayi Vijayan. The LDF government stood rock solid on this issue. The opposing parties have already begun their Lok Sabha pitch in Kerala, especially the BJP which looks for a significant breakthrough using its Hindu card.

BJP has been successful to bring the debate on the national level by mixing it with the Triple Talaq Bill. The Congress-led UDF is just playing a safe card by hiding behind the BJP and not really having their own stance. This even though has helped them survive the first wave, in the long run, BJP seems to have the upper hand as far as this issue is concerned. LDF though has strong momentum in Kerala when it comes to elections and on ground support.

Also Read: Why The Sabarimala Issue Is A Case Of Striking Mismanagement Of A Sensitive Matter

It was only on January 2, 2019 that women actually entered the shrine after removal of the ban. However, it seemed like a well-orchestrated operation by the police. The police at wee hours of the day took two women along with them, dressed up in casual civilian clothes, which was done to keep the crowd distracted. Eventually, they were successful in the operation and had openly accepted the plan execution and released the visuals of women entering the shrine and praying.

This move provoked widespread protests and violence which brought the state to a standstill. Even the women who entered the temple had to face the wrath of the devotees and even their own family members. It took more than a week actually for everything to get back to normal. Parties to the issue also submitted over 50 review petitions against the verdict in the Supreme Court.

Something that has been often given less importance within the issue has been the verdict itself. The verdict was self-explanatory on why this ban should be removed and whether the Supreme Court can intervene or not. Article 25 of the Indian Constitution allows all citizens to choose the religion of their choice and also that the state can’t intervene into them, but the same article itself gives power for higher authorities to remove the practices which are unconstitutional and which hurt the fabric of the idea of India. This is again a part of a totally different debate. 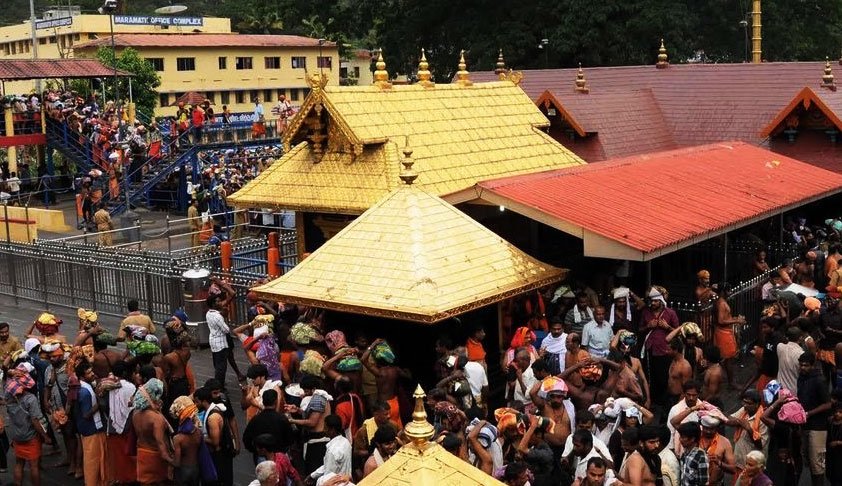 Driving back to the past there has been a lot of intervention by the court into the matters of religion, namely the Triple Talaq issue, the Hindu Marriage Act, entry of women into the Shani Shingnapur temple and the Haji Ali Dargah, etc. Even the statement that courts should not interfere itself contradicts the 1991 Kerala HC verdict.

Whichever side one may choose to take doesn’t matter, try to stay on the point. Never allow political entities to use religion as a tool for winning votes and dividing people. Courts are the highest authority in a democratic country like India, it has the power to strike down unlawful matters that come up.

The agenda of development has now slipped to the agenda of faith, religion and politics. We need to shed this obsession. Religion is what we practise in our homes and not play on the streets and use for getting votes.

In my opinion, the government at the centre should bring a uniform law system which will be applicable to all religions alike and which will also curb problems associated with religious influence in various areas. Everyone irrespective of their background must be able to follow the religion of their choice and must have the right to pray and also have the right to enter any place of worship. This will also help in pilgrimage tourism and people can get to know and appreciate various cultures and religious practices.