India is pretty much the nation of contradictions; it is the face of development, and ironically also the face of poverty and malnutrition. Unfortunately, there is an ailment that is rampant in the uber metropolitans, as well as the poverty-ridden villages of India, from the upper classes to the lower classes – domestic violence against women. The widespread nature of domestic violence makes it all the more relevant.

Protection of Women from Domestic Violence Act, 2005, defines domestic violence as physical, sexual, verbal, emotional and economic abuse of women, by a partner or any other family member residing with them. There is a wide array of violence that is being perpetrated against women, within the families. It includes but is not limited to intimate partner violence, sexual abuse of female children by a family member, marital rape, dowry-related abuse, female genital mutilation, non-spousal violence, and violence related to exploitation.

Research studies related to domestic violence reveal large gaps as they are usually restricted to a specific age group (15-50), hence neglecting women falling on either side of the range. These women are also exposed to different forms of domestic violence, as young girls are married off early in many rural areas of India. On the other hand, older women often suffer harassment in terms of abandonment, neglect and verbal abuse – which is not accounted for in many studies. 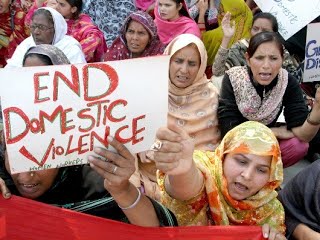 Patriarchy itself is a monumental problem that encompasses within it a wide range of issues. If patriarchy is a tree, then domestic violence is one of its branches. It creates a power imbalance within the family as it renders women socially and economically weaker. The role of patriarchy is to normalize the use of violence against women by men and women alike. This is something that I realized very early in my life, as I saw that my grandmother had normalized domestic violence against women. If she heard a case of domestic violence among her relatives, she would not get angry or feel frustrated; she would instead, very casually brush the matter under the carpet, as if ‘men beating women’ and ‘mother-in-laws enslaving their daughter-in-laws’ was the norm of the day.

I did not blame her because that is exactly what patriarchy does to you, it can convince the victim to believe that she deserved no better than her slave-like existence. In India, there is an age-based hierarchy in relationships within our country, where a mother-in-law or an older woman exploiting a younger woman is acceptable. Another study conducted on understanding the framework of domestic violence states that around 65% Indian men believe that women should tolerate violence to keep the family together.

There was, and is, a lot of hullabaloo among people regarding the strengthening of the PWADV Act, 2005. Many people claim that it can be misused by women who intend to take revenge from their in-laws by extorting money; hence, it should be changed. What becomes difficult to comprehend is that domestic violence is a crime that is highly under-reported, owing to the sensitivity of the issue.

The law was made stringent in order to empower and enable women to come forward to file charges against the culprit. This could be understood, if you comprehend that the culprit lives with the survivor, making it impossible for the survivor to escape. A person’s home is considered as the safe haven, as a secure place that can keep you away from your abuser; but in case of domestic violence, one’s home becomes a torture chamber. The sense of security is lost and the survivor is unable to find security and safety anywhere.

In addition, since the perpetrator is a family member, it becomes difficult for the survivor to put a end to the recurring violence. The survivor of domestic violence does not only suffer from physical abuse but also a breach of trust, as being exploited by a family member kindles a sense of insecurity and violation of trust.

The consequences of violence in general, and domestic violence, in particular, are adverse and long-lasting. There are certain tangible consequences like physical injuries, unwanted pregnancies, and health problems, and then there are certain non-palpable problems which may lead to depression, anxiety or suicide in the survivor.

There are certain ‘survivor-oriented’ short term remedies to help them deal with domestic violence. These would include training medical practitioners to identify survivors of domestic violence, and providing them with guidance, legal and therapeutic counselling, and health assistance. District officials can collaborate with NGOs to spread awareness about legal, political and economic rights of women. Workshops and training sessions conducted in rural and urban India can ensure that women identify their position, they understand that they cannot be subjected to torture and hold power as well.

As far as long term measures are concerned, there is a need to follow a ‘perpetrator-oriented’ approach. There could be gender-sensitisation workshops in schools, college, and offices. It could be made mandatory for men to attend these; making these workshops interactive and innovative would ensure that men understand what is wrong with patriarchy, violence, and coercion. In addition, college students can be encouraged to perform plays and skits in slums and other rural areas as part of the workshop.

Government and corporates can also sponsor such activities. The foundation on which people’s value system is created needs to be modified. It is bound to be a gradual and evolving process, but a certain definition must be re-evaluated, and an integrated approach must be followed. The perpetrator should understand why they must not abuse a woman, and each woman should be aware of why and how she cannot be treated like a second class citizen.

Gender sensitization for men, and empowerment for women could be followed. Language and media-content consumed by people should be censored to ensure that it does not promote domestic violence against women. India has come a long way since Independence, and yet we have a long way to go. One thing we must teach our children and elders alike is, that it is not okay to perpetuate or tolerate violence. It is a threat to our mental and bodily freedom, which cannot be taken for granted.